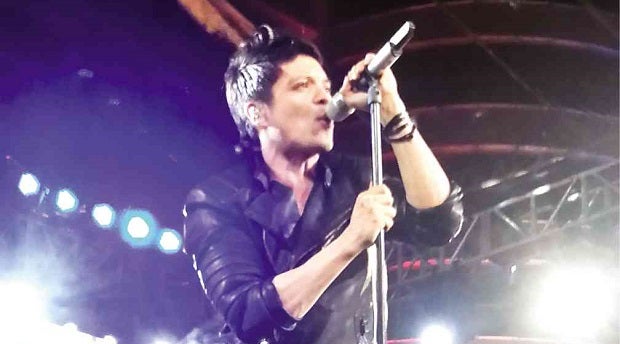 The five hours we spent watching the Eastwood City New Year Countdown show left us with no time to drink. 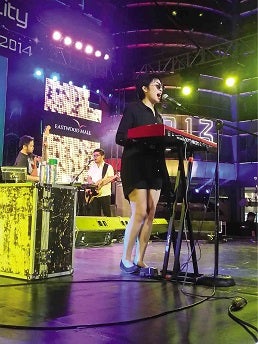 No kidding, not a single drop of either beer or wine. That was because we couldn’t bear missing out on the tightly scheduled live musical performances at the Eastwood Mall Open Park.

In and around the mall, merchandise was being sold, its proceeds meant for Supertyphoon “Yolanda” survivors.

At 6 p.m. a sizeable crowd was ready to party, as the Draybers opened the event with a medley of Juan de la Cruz classics. We noticed that its star frontman, “Voice of the Philippines” grand winner Mitoy Yonting, was letting his younger brother and also the band’s rhythm guitarist, Mylo Yonting, to take the spotlight as lead singer. It was a good way for Mylo to gain more confidence, which he needs at this point in the band’s career. 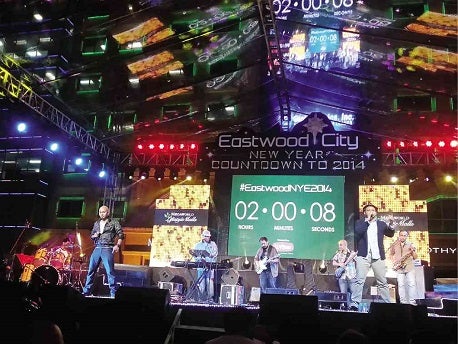 When Mitoy finally took over lead vocals, something struck us with how he has achieved the seemingly impossible: mainstream popularity without the need for image-building. Mitoy is no matinee-idol material; in fact he looks like a cop or a gangster. He doesn’t even move like a rock star—no dancing, just walking from stage right to left, as if he was patrolling the streets.

But the moment he sang, everyone listened. He covered Queen, Celine Dion, Bon Jovi, plus an original, “Bulag,” all of which affirmed one truth: having a powerful, expressive voice is the only thing one needs to go places. 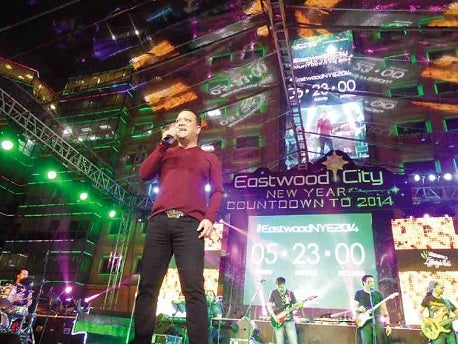 What followed were more exceptional acts that have gained a loyal fan base through the years: Up Dharma Down (UDD), led by the emotionally tortured Armi Millare; South Border, with co-founder and chief songwriter Jay Durias leading a younger but no less talented bunch of sidemen; and Bamboo, also backed by his handpicked set of musicians.

UDD played 10 songs that dripped with sadness and despondence. The sense of despair we felt in “Tadhana,” “Pag-Agos,” “Oo,” “Luna” and the rest could lead the mentally unstable to depths of depression. But there was something to balance all that—the music bounced with sophisticated soul and power pop with New Wave accents. 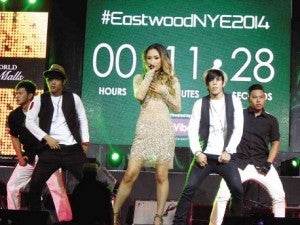 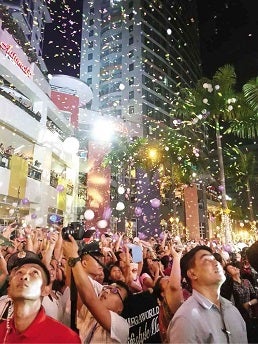 The thing about this band is that it tries its best to avoid sounding boring, even if it has to play what the crowd expects to hear, especially “Kahit Kailan” and “Rainbow.” Durias had fun inserting jazz grooves and phrasings to the original arrangements of those songs.

For finale, the band covered Eric Gadd’s “Do You Believe in Me?”—an upbeat tune that matched the party atmosphere.

The air turned electric when Bamboo went on. His set, a mix of old Rivermaya hits and recent chart-toppers with his band before he went solo, was a joy to behold because he was all over the stage—moving like a boxer about to challenge Manny Pacquiao, stomping his feet like Bono while dressed in a trim leather jacket like Elvis Presley in his 1968 comeback.

As the crowd went crazy, Bamboo was clever enough to paraphrase Leonard Cohen’s “Hallelujah” before singing his own tune of the same title; later he began “Noypi” solemnly, before going full-throttle, the lines “May agimat ang dugo ko” seemingly inspired by what the storm survivors had gone through.

Bamboo ruled the stage so mightily that the next artist, Jessica Sanchez, somehow failed to sustain the energy. Notwithstanding dance tunes performed with four backup dancers, what dampened her set was that she sang minus-one.

When the clock struck 12 and the fireworks began, we wanted to head to the nearest club for a much-needed beer. Alas, the crowd was too thick; by the time we got to Eastwood Central where drinking was in full swing, our bones told us to settle for some pasta and soup.