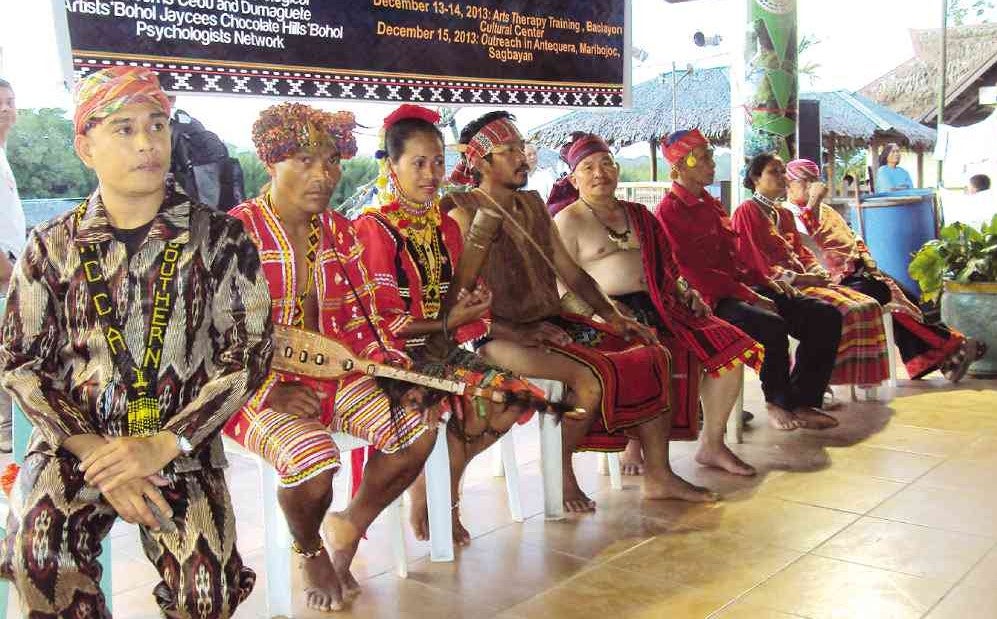 CULTURAL communities on the Abatan Riverbank in Cortes

Although the National Commission for Culture and the Arts (NCCA) initially shelved the Dayaw indigenous people’s national celebration in Tacloban last November due to Supertyphoon “Yolanda,” it reset the event and held a much different celebration altogether.

“Dayaw” is Visayan for “praise,” and the 2013 commemoration celebrated the strength and spirit of the cultural communities. It specifically gave tribute to the people in calamity-stricken Visayas.

In the town of Antequera, the people gathered and talked about their experience of the quake. They were then asked to produce a picture and post their art in a makeshift wall.

Bontoc tribes men Roy Camiding and Ventura Bitot conducted a healing ritual called “legleg” for the Boholeños. Native leaves were immersed in a bucket of water. Prayers were then said, and using the bunch of leaves, the tribes men sprayed the water on the public, something akin to the Roman Catholic practice of blessing the people with holy water.

In Sagbayan, one of the towns covering the Chocolate Hills, cracked houses are common, while other concrete houses have fallen altogether. In one barangay, community members gathered around to watch a healing ritual conducted by Manobo, Higaonon and Talaandig Cluster representative, Datu Modesto Pocol.

Pocol recited prayers before slaughtering a chicken in front of the audience; the cooked chicken was to be consumed by the entire community, fostering stronger ties among the people of Sagbayan.

Edward Perez   did an exercise, which called for the audience to sing and dance to a piece about the night cycles of the tarsier, another symbol of Bohol. At some point of the exercise, he exclaimed, “Eh lumindol” (But the earth shook!), eliciting laughter from the people, encouraging them not to sulk because of the disaster.

Apart from Bohol, Dayaw is slated to go to other calamity-stricken areas such Tacloban City and Zamboanga City, the former wiped out by Yolanda, and the latter, still reeling from the attack of the Moro National Liberation Front last September.

“I think that the indigenous communities must be actively engaged,” said Northern Cultural Communities Secretary Edwin Antonio. “We can do more of healing rituals in the indigenous way [by] gathering the community and we can have some interactions.”

Intercultural rituals and an art show at the Abatan River Visitor Center in Cortes capped off the visit of the NCCA.

“[It] gives respect to the spirit of the water so that the spirit will guide us in all our works,” Ulo said. “It will also help prevent disasters.”

The T’boli gave three ceremonial gifts to the spirits. The helet, a belt with brass bells and commonly seen during dances, drives away bad spirits.

Kegal bensewit, the most valued upper garment of the T’boli due to its inlaid pearls, is considered precious by the spirits. A chicken was also given, which symbolizes life and rootedness in the land.

Ulo explained to the public that whoever would catch the chicken should not slaughter it; the chicken must be attended to until it dies of natural causes.

Bukidnon tribesman Leopoldo Caballero performed a haunting chant that echoed as the night dawned in Cortes.

The Matigsalug couple Brigido and Maridel Lacaran did a dance while playing their instruments called salurey and kuglung. The former is a musical instrument played by women; it consisted of a piece of hollow bamboo with six strings; but the position of the frets may be adjusted prior to performance. The latter is a two-string and six-fret guitar for males; both strings have the same tone, but one only string is pressed, giving the tone more body.

Roy Camiding played with an afiw (Bontoc jaw harp) while fellow Bontoc tribesman Ventura Bitot chanted. The crowd cheered to the sound of the distinctly Cordilleran instrument and chant, despite the language barrier.

Datu Modesto Pocol also prayed and gave a group blessing for all of Bohol.

The Loboc Chamber singers performed the Visayan classic “Rosas Pandan,” which tells the story of a girl who goes down from the mountain to the barrio to join the people in their joy. They also sang the praise song, “Sa Iyong mga Yapak” (In Your Footsteps).

Another group that performed was One Ta (“We’re One,” in Visayan) Children’s Choir from Sagbayan. The children used mandolins to play various folk tunes.

Afterward Reden Ulo performed another T’boli dance, which appeared to mimic the graceful flapping of a bird’s wings.

Meanwhile, the Bohol Visual Arts Group erected a bamboo structure with four sides that tapered toward the top. Smaller pieces of painted bamboo were hung at the lateral parts of the structure.

As a finale, Panay-Bukidnon community members Leopoldo Caballero and Regina Villanueva blessed the vessel that would be another offering to the spirits. While the ceremony was going on, a mini-ark made of banana stalks, nipa and bamboo was loaded with various offerings of kakanin (native rice delicacies).

At the time of the ritual, a bell was rung to summon everyone. Chants were said and an offering of native wine was passed around the audience. Offerings were also asked of everyone, and the small boat was loaded with more bits of food and some coins. Blessings were then said, and the people then pushed the boat to the water. Eventually the slow current of the Abatan River took the small vessel downstream.