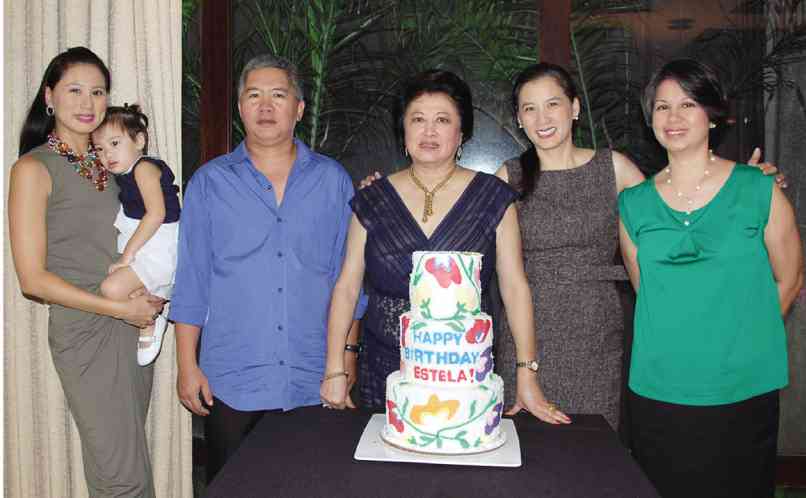 The statuesque southern beauty Estela Justiniani Lopez celebrated her birthday recently by treating her friends to a special luncheon for two consecutive days.

Expressing gratitude for her “good health which, for me, is the most important blessing from the Lord,” Estela first hosted lunch at the always consistent El Cirkulo in Makati City.

The restaurant’s wonder woman, Malou Gamboa, prepared a Spanish feast including paella, cochinillo, tapas and desserts that the guests raved about après totally finishing what they had on their plates, dahlings.

Day two was lunch for Estela’s gang from Santuario de San Antonio Parish, held at one of the best Japanese restaurants in town, Inagiku in Makati Shangri-La hotel.

Both occasions will be remembered by the invitees as happy, intimate moments with their palangga, our queen for two days, Estela J. Lopez.

A great new beginning for 2014 was the romantic wedding of the well-respected Jack Stehmeier and the gorgeous Berry Tenchavez.

They met in 2002 when Jack was 22 years old and Berry was only 18. They dated for a while but were too young to commit to each other. Berry eventually left for college in the US and lost contact with Jack.

Seven years later, dahlings, Berry was busy attending to her booth at a bazaar in Alabang when Jack spotted her. Through Facebook, Jack persistently asked Berry for her number; but four more months would pass before they finally met again for a date.

The couple became inseparable and romance blossomed in the next three years.

During an all-boys’ biking trip to the US, Jack felt the urge to ask for Berry’s hand in marriage; but he couldn’t reach her. After calling some of Berry’s closest friends, Jack learned that she was on a business trip in Europe.

Jack, true to his persistent character, hatched a plan that surprised Berry—by waiting at the airport with an engagement ring in hand.

Berry, a fashion designer who also works as a wedding coordinator for Bridesmaid Inc., personally took care of every detail of her trip to the altar. She said she wanted “an elegant yet intimate celebration that would strike a balance between formal and laid-back, with superb food and lots of drinks.”

The wedding was held at the picturesque St. Benedict Church in Ayala Westgrove Heights, Silang, Cavite, officiated by Bishop Raul Martirez and Msgr. Dan Sta. Maria. The church was lined with beautiful green arches; the trees and floral arrangement at the reception by Zenas Pineda was exactly how Berry envisioned it.

Berry was stunning and radiant in a gorgeous gown by Rajo Laurel, who has been her designer of choice since her high school prom. But for her wedding entourage, Berry designed and executed all the gowns in black, gunmetal gray, silver and white.

The reception was held at The Hills, also in Silang, Cavite, where guests were treated to a special menu that included Jamon Iberico de Bellota; assorted cheeses; Cebu lechon; and fresh tuna flown in from General Santos City.

For drinks, there were Malbec wines, as well as martinis and champagnes from the Lagarde vineyards in Argentina, brought in by the bride’s brother, Bobby.

Live music was played by the Powerhouse Band.

Cheers to the endless love and togetherness of Jack and Berry Stehmeier!

Last week, Vicki Belo and her team at Belo Medical Group, as well as its celebrity endorsers, mounted a garage sale at the clinic’s Greenbelt 2 branch to benefit survivors of Supertyphoon “Yolanda.”

Lots of eager buyers were just too happy to hit two birds with one stone—the opportunity to buy branded items from their favorite celebs at low prices, while helping help out our still suffering, storm-ravaged kababayan in the Visayas.

She also auctioned six designer bags via her Instagram account (victoria_belo); she likewise allowed all Belo clinics to be drop-off points for donations in cash and kind for the storm survivors.

Assisting her own staff, Vicki helped pack the items bought by the shoppers and talked to them about their finds.

“I’m happy and thankful to all Belo endorsers and friends in show biz who participated in this successful garage sale. Your help will go a long, long way,” Vicki said.

Belo employees also gave donations from their own pockets; the funds collected were generously matched by Vicki, so a bigger amount will be given to the beneficiaries.