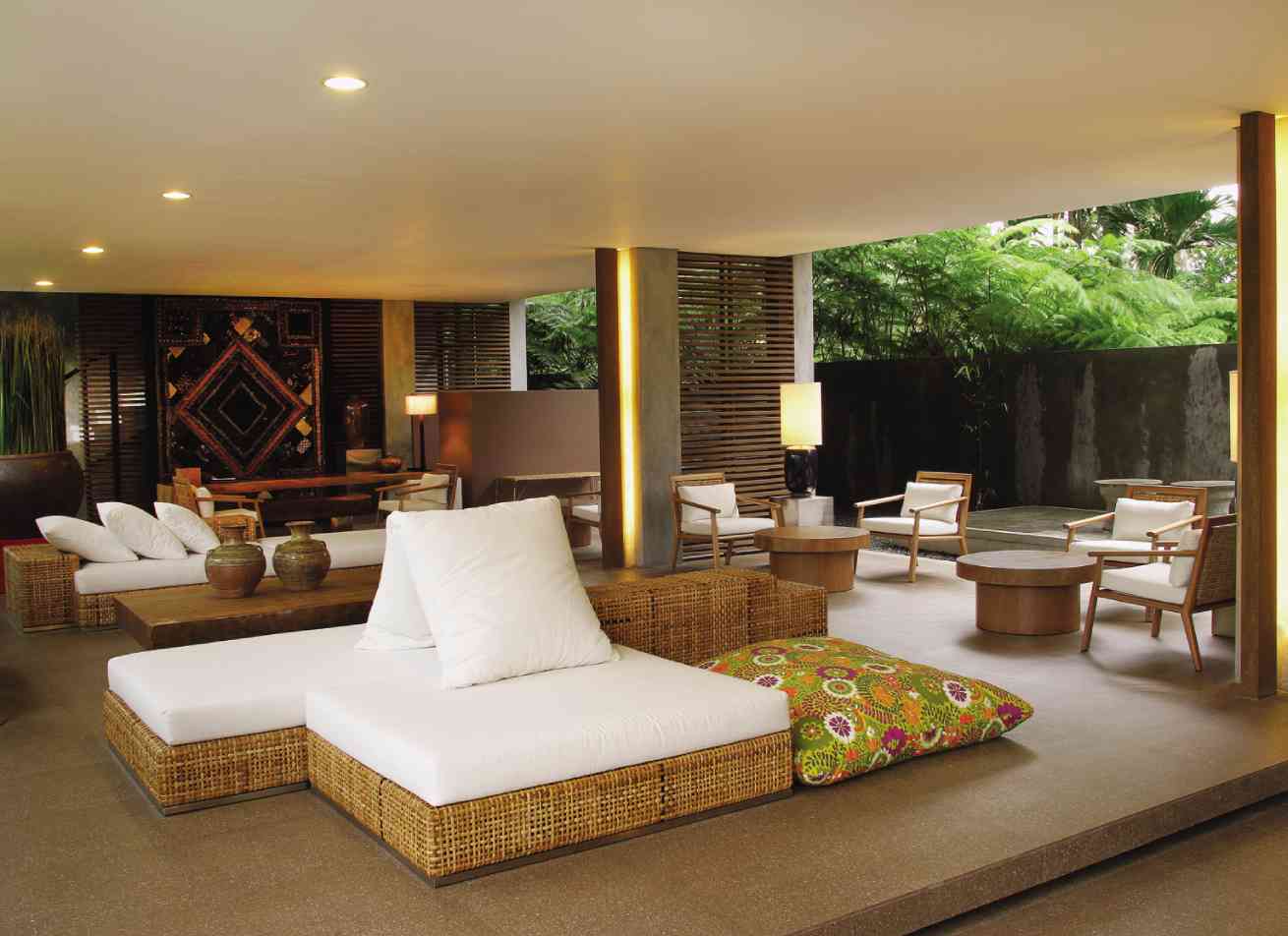 “LAYOUT at the lounge is more like that of a home than a hotel,” says Naval.

Growing up in Sorsogon City, Katherine Rodrigazo Naval would climb up the piles of copra in the bodega of her Lolo Siama, a grandfather from the paternal side.

Also known as Luis Lee, an emigré from Amoy, China, Lolo Siama established a copra and abaca business and had a 10-hectare coconut plantation at the outskirts of the city.

When Katherine and designer Milo Naval were newly married, they would spend their holidays with her parents and visit the family property. Two decades ago, the place was inaccessible, yet its lush, exotic beauty beckoned. When the road was developed, the Navals built their residence on the fringe of the property. That house became the prototype for their resort which would be named Siama Hotel, in honor of Katherine’s grandfather.

“Our house is a study for the rooms of the hotel—the interiors, the furniture, the louvered headboards,” said Milo. “It’s simple—a minimalist house and lots of vegetation. I don’t like too many details in the architecture. I like the airy feel of wooden slats.”

In fact, the slats generate an aesthetic interest of their own and are used as architectural sunscreens, cabinets, trolleys, headboards and bathroom doors in his residence and at Siama Hotel.

Milo’s house takes after the nipa hat with its cube shape and pitched, thatched roof made of anahaw. “It’s sustainable because anahaw takes 10 years to grow, but the structure has a steel frame,” he said. “When the sunlight hits the roof, it shimmers because of the net.”

He added that the steep pitch of the roof enables the water to flow down quickly when there’s a storm.

“I wanted the house to look provincial yet modern. The steps are made of cement finish and gravel washout,” he said.

The hotel’s architecture is more contemporary with its rough cement finish and slotted  walls that exude a decorative quality.

Still, there are many things in common with the house and the hotel such as the cross ventilation. At the Naval residence, the ceiling in the bulwagan or open plan is pitched at seven meters high so that the warm air could freely circulate and provide a cooling effect. Even the rooms at Siama are built with high ceilings.

To Milo, mood plays a vital role in the design. He interprets this through cove and spot lighting in his residence. “I wanted to keep the house dim and let the moonlight do its work,” he said. Likewise, the lighting in the hotel’s guest rooms is soft and ambient.

The designer created signature pieces for the home which are now found in the hotel. The acacia tables are made from fallen trees. A single slab of wood is five meters in length and six inches thick. Its rusticity is contrasted with the modern steel bases.

The wicker chairs are distinguished by their cross-weaving and open weaving designs.

Another distinctive element of Milo’s design is the wide proportions designed for families and groups. Being a family man, Milo enjoys bonding with his children. Most of his kids bring their friends for sleepovers. Hence, his sofas and ottomans are low and wide for lounging. He uses a lot of large floor pillows to make the space cozier and more laid-back.

At the Governor’s Suite, a tribute to Milo’s in-laws (his father-in-law Raul Lee has served for five terms and his mother-in-law, Sally, is the mayor), two queen-size beds are conjoined to form a single but hefty bedspace. As if it weren’t enough, the suite has pullout beds and additional mattresses.

The other guest rooms are furnished with a bed with a slatted headboard at the center for visual equilibrium in space. The designer explained that floating a bed in the middle of the room provides accessibility to the doors and closets.

Siama is owned by Paradiso Blue Inc. Milo underscored that he would rather be known as the hotel’s designer.

“The resort can be used as a base so that people can travel to other destinations in Sorsogon which are 30 to 90 minutes away from  here,” he said.