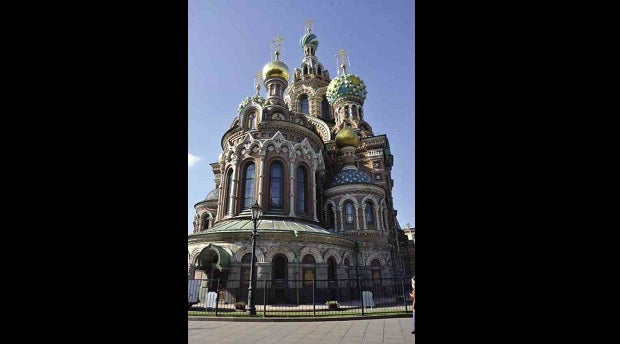 Church of the Savior on Blood

St. Petersburg: From the tsars’ palaces to Putin’s dining place

First in a series

Went to: “St. Petersburg, the culture capital of Russia”

Favorite spots: “St. Petersburg is a living museum and is the historical and cultural capital of Russia. One can never run out of things to experience in the “Venice of the North.” You will need at least five days to discover the architectural wonders of this city, home to unparalleled collection of classical architecture, baroque palaces and neo-Russian churches. Add to the mix a thriving bar and nightclub scene, a collection of new five-star hotels, and a dynamic population eager to embrace the fast-paced life as Russia spins toward the hedonistic society of the 21st century.

1. The State Hermitage Museum:  An unrivaled collection of art treasures housed in the magnificent palace from which the Romanov tsars ruled the Russian Empire. This is probably the best museum in the world. A visit to this museum should be the focus of any first-timer to St. Petersburg.

2. St. Peter and Paul Fortress is the original old city of Peter the Great, an enclosed walled city where every structure radiates out to the other side of the river. Architects and engineers who built this fortress were from Italy and Switzerland and were commissioned by Peter the Great to build the new city of St. Petersburg in the 1720s. He wanted to create an empire that will be a reminiscent of the architectural wonders of Paris and Stockholm.

3. Church of the Savior on Spilled Blood built by Alexander III is an exuberant collection of polychrome cladding and onion domes. Its interior depicts biblical scenes with every square inch coated in rich colored mosaics. The Church contains over 7,500 sq m of mosaics—according to its restorers, “more than any other church in the world.”

Where he slept: The W Hotel is centrally located near the Hermitage. It is walking distance to many of the most famous attractions and shopping areas, and only a five-minute walk to the subway.  The view is amazing, overlooking the city and right next to St. Isaac’s Cathedral.

At sunset, this is the best place to chill with your colleagues for cocktail and nibbles high above the rooftops.

Best meal: The most memorable dining experience was at Kafe Kat, our first with Georgian cuisine. When you visit any Georgian restaurant, you will be amazed above all by the number of different starters and the magnificent meat dishes.

This restaurant prides itself in having hosted dinners for dignitaries including Russian President Vladimir Putin. The menu is the pride of Georgian cuisine—dolma (vine leaves stuffed with meat and rice), various types of shashlik (pork, beef, lamb, chicken, salmon), and khachapuri (cheese bread).

It has a unique tradition of lighting the candle to signal the start of dessert.

Russia has such a strong café culture—students, office workers and the locals hang out either to catch up with friends or simply take a break. Walking down the Nevsky Prospect, you’ll find many pretty cafés which operate round-the-clock.

CyACTbE Café is our favorite. In Cyrillic alphabet, this translates to “Happiness Café.”  It’s al fresco seating, surrounded by white potted flowers on wooden racks painted Tiffany blue and white. We especially loved how filament bulbs lined the huge window frames, with many more hanging overhead. Every corner of the café was picture-perfect.

Russian ice cream is consistently good—either in renowned restaurants or convenience stores. It is a good mix of mild sweetness and creaminess, even if eaten in freezing weather.

What he bought: Matryoshka doll, a set of wooden dolls of decreasing size placed one inside the other. They are sometimes referred to as “Babushka dolls” (grandmother doll). Traditionally the outer layer is a woman, dressed in a sarafan, a long and shapeless traditional Russian peasant jumper dress. The figures inside may be of either gender; the smallest, innermost doll is typically a baby turned from a single piece of wood.

Much of the artistry is in the painting of each doll, which can be very elaborate.

A replica of the Fabergé Egg still bearing the Faberge trademark is something to keep. The Faberge Egg started out as a number of jeweled eggs created by Peter Carl Faberge and his company from 1885 to 1917. The most famous were those made for the Russian tsars Alexander III and Nicholas II as Easter gifts for their wives and mothers, often called the “Imperial” Fabergé eggs.

Russian chocolate is a very sweet, toffee-like dessert made by carefully heating equal amounts of milk or cream and sugar. It is a traditional dessert sauce in Nordic countries.

1. St. Petersburg Metro railway system is the most attractive, elegant and the deepest in the world at 105 meters below the ground. That’s like descending through a 35-story underground building. Almost each Metro station is a work of art with marvelous decorations designed by some of the country’s best architects. It’s worth a visit even if you don’t really need to take it. Each station has its own concept and a meaningful story to tell.

2. One of the most appalling experiences when you enter St. Petersburg is the lack of order at the immigration procedure. In the US you may find a long queue but it is strictly organized, so even if you have to wait, you know you will eventually get there.

Here, a huge crowd waits in front of immigration officers; you just have to keep your elbows out and you may eventually make it. Until a few seconds before your turn, you don’t even know which counter is for you.

3. “Swan Lake” is a ballet that has become a symbol of Russian art itself. The performance of the famous ballet cannot be seen anywhere else at St. Petersburg. The interior of the building is not as spectacular as I would have imagined. On the eve of the performance, I wore a blazer over a smart tee and a pair of jeans. Most people were in casual attire, not overdressed.

Tips for travelers: “Lodging prices in St. Petersburg are quite high. The proliferation of privately owned “mini-hotels” means there is no shortage of excellent, mid-range accommodation options. Prices of luxury hotels start at $200 and go all the way up.  The good news is there is a number of mid-range options that are nicely renovated and efficiently run, offering good service and even a touch of style.

On the rare hot days of high 30 degrees Celsius, residents flee to the beaches on the north bank of the Gulf of Finland.

Plan your visit to the Hermitage Museum well, as it is always busy.   Should you be in St. Petersburg in summer, it’s best to do this in the middle of the day while tour groups are having lunch.

The Hermitage is a very large museum where it’s easy to get lost.  The museum has a lot of windows. So, if you keep to the windows on the right side or on the left side, you’ll find all the best places in the museum.