Roxas does the Zumba for a healthy police force | Lifestyle.INQ ❮ ❯ 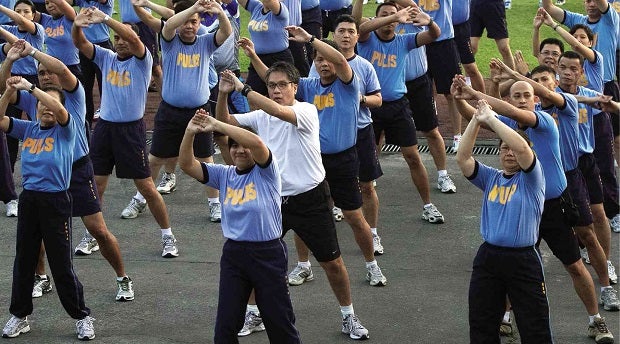 Roxas does the Zumba for a healthy police force

“Isn’t getting fit all part of our New Year’s resolutions?”

Philippine National Police Director General Alan Purisima raised this question as he got into the groove early Saturday, jogging with Interior Secretary Mar Roxas around the PNP headquarters in Camp Crame at the break of dawn to jump-start a healthy year for the country’s police force.

Despite persistent rumors that Roxas and Purisima are not in good terms, the two appeared friendly to each other the whole morning.

Roxas echoed Purisima’s statement that it is easier to keep one’s resolutions when done with family, friends and colleagues.

With 700 senior and junior officers and nonuniformed personnel, Roxas and Purisima moved to the beat of Zumba, a combination of Latin dance and cardio workout, to kick off the relaunch of the PNP “Hataw Na” physical fitness program at the PNP Grandstand.

“With this program, we’re [getting fit] together,” Purisima told the Inquirer.

After the hourlong Zumba, Roxas and Purisima did a 3-kilometer walk with other PNP officers.

The rest of the policemen and nonuniformed personnel either did the 5-kilometer fun run or the 10-kilometer bike ride.

Unlike the PNP’s previous physical fitness training, this year’s program is not aimed at pressuring cops to take off inches from their girth.

In the past, the PNP had mandatory physical fitness programs for policemen found to be overweight, specifically during the terms of then Director Generals Panfilo Lacson and Nicanor Bartolome.

In 2012, more than 3,000 policemen assigned to the PNP headquarters in Camp Crame were found to be overweight and were ordered to go through an eight-week slimming program by Bartolome.

Under Purisima, the physical fitness program implemented nationwide is designed to get the policemen into the habit of exercising weekly with their colleagues and their families, and ultimately getting into shape.

The program was also envisioned to be a Saturday recreational activity for the policemen and their families, Purisima said.

Next Saturday, the policemen and women can bring their families to their different PNP camps to exercise.

Without the pressure to lose weight or get into a healthier lifestyle, “we may even have a healthier PNP within six months,” Roxas said.

Some policemen were overheard talking about calorie counts and how much calories they could burn in an hour’s exercise.

“This is really recreation and fellowship while exercising. Doing it together is actually more fun and encourages camaraderie among us,” Roxas added.

Free coffee and plain pan de sal were available at the PNP Grandstand throughout the morning.

Roxas said the weekly workout could even be a contest among police units or departments, where their collective inch-losses could have an equivalent monetary reward. But the money would go to charity, he said.

In a statement, Police Director Lina Sarmiento, PNP Director for Police Community Relations, said that the program hopes to “bring about physically and mentally fit personnel who can render quality police service to the community.”

“To effectively maintain peace and ensure the safety of the public we should always be prepared and fit to run after criminals and violators of the law. Also, being in optimum health enables us to be ready to defend ourselves and our families from any danger that could come our way,” Sarmiento said.

Half of cops in Camp Crame are overweight