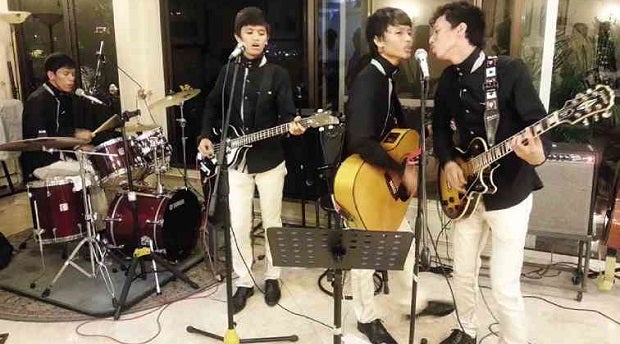 We missed Patti Austin’s benefit gigs for Supertyphoon “Yolanda” survivors, but we’re glad to have attended a splendid party recently that had live music performed by a young band from storm-ravaged Tacloban.

The party, hosted by birthday girl Lenny V. de Jesus—once dubbed the “dragon lady” of Malacañang during Joseph Estrada’s tenure—was held at her penthouse suite in a Makati condo. Though an annual affair, that night was different because De Jesus had invited the band REO Brothers, composed of four siblings who decided to try their luck in Manila after wanting to shake off the trauma wrought by Yolanda.

Erap (Estrada) himself showed up, sitting in the company of comedy wiz Willie Nepomuceno, prompting us to take a snapshot.

Weeks before the party, De Jesus had gathered her friends in the music industry to check out the REO Brothers—who had been using her spacious condo as a rehearsal space—and see how they can help the band.

In December last year, the band had its debut performance in Manila at ABS-CBN’s Yolanda fundraiser held at Smart Araneta Coliseum; the Kapamilya network’s chairperson, Gabby Lopez, apparently enjoyed the REO Brothers’ Beatles set, as seen on a video uploaded on YouTube, in which Lopez was spotted by TV cameras happily singing along.

The band has also landed a weekly slot (Tuesday nights) at Primos Cuisine and Lounge behind Edsa Central near Shaw Boulevard (Unit 1-3 Mayflower St., The Hub, Greenfield District, Pasig City), which is co-owned by singer Rannie Raymundo. One of Raymundo’s business partners, Tom Banguis Jr., has also been helping the fledgling band.

At the Makati party, the band opened with a Gary Lewis medley (“Everybody Loves a Clown,” “I’ll See You in September,” “This Diamond Ring,” “Sealed With a Kiss,” “Rubber Ball”), sending a wave of nostalgia to the baby-boomers among the guests.

Segueing to another medley, that of the Beatles, the band’s infectious energy caught everyone’s attention. Three women, in particular, started dancing; moments later they succeeded in persuading me to join them.

As the band played more Beatles hits, we chanced upon an elderly man watching at the sidelines; he turned out to be Rey, the father of the REO Brothers. He explained what “REO” means: “R” for the first letter of his and his sons’ names; “E” for Evasco, his wife’s maiden name; and “O” for Otic, his surname.

How could his kids, barely out of their teens, be so familiar with ’60s music as if they belong to that generation, we asked Rey.

“Dahil sa akin,” he said, adding that he bought albums of the Beatles and other ’60s artists so that his boys, who apparently had been bitten hard by the music bug, could learn to play the songs.

“These boys remind me of the Dyna Souls, which played at my party when I was 15,” said Russell Sobrepeña, retired corporate exec-turned musician who was among the guests happily reminiscing the music of their youth.

Mike Pedero sounded like he’s also willing to help the REO Brothers. “But the band needs original songs if it wants to record an album,” he told us.

Watching the REO Brothers up close, we noticed that there wasn’t really anything new that the band was doing to distinguish it from other Pinoy or international acts, past or present, that specialized in Beatles and ’60s covers.

But what could spell the difference, small but telling details in the REO Brothers’ performance, are the boys’ naiveté and innocence which perfectly match, for instance, the simple joys of budding romance in “I Wanna Hold Your Hand” and “Do You Want To Know a Secret?”

Nonetheless, the band’s musical skills are something to look out for; RJ’s guitar solos, for example, were terse but piercing. The boys’ singing were likewise impressive, never mind a few slips in diction.

As the night wore on, the band surprised us with more vintage music: Frankie Valli, the Beach Boys, even Elvis Presley!

But perhaps the most touching tune the REO Brothers played that night was the Beatles’ “Here Comes the Sun,” George Harrison’s lyrics capturing what the Tacloban boys felt: “The smiles returning to their faces.”

Performing for strangers who wouldn’t mind being friends, and getting paid for it, surely is one happy thought.