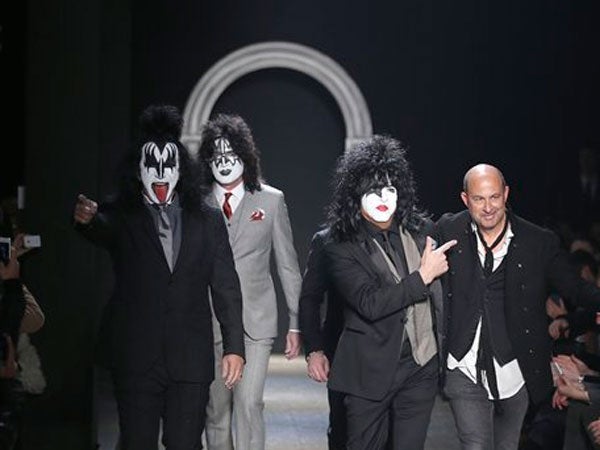 American fashion designer John Varvatos, right, is accompanied by Rock Band Kiss as he acknowledges the applause of the audience, at the end of his men's Autumn-Winter 2014 collection, part of the Milan Fashion Week, unveiled in Milan, Italy, Saturday, Jan. 11, 2014. AP

MILAN — Gene Simmons wagged his trademark tongue as an all-glammed-up Kiss swept down the John Varvatos runway in an unannounced appearance during Milan Fashion Week.

The band that brought glam to rock decades ago gave a burst of energy to the Varvatos’ rock-inspired menswear preview for next winter Saturday, bringing the normally restrained fashion crowd to its feet to “Rock and Roll All Nite.”

Simmons said fashion for him is “to be an individual and not to be a lemming.”

Varvato’s designs have that “rock persona,” Simmons said, adding “if he wasn’t designing clothes, he’d have a guitar around his neck.”

“The idea is to have a fiery heart and an insatiable appetite for any pair of beautiful eyes, male or female, looking at you. And what you wear is an extension of your sexuality,” said Simmons, the band’s bassist.

Singer and guitarist Paul Stanley said the band met Varvatos during Milan Fashion Week last year when they were performing in the city. The band has since signed on to do an ad campaign for Varvatos.

“I knew John’s clothes for years because they have all those elements that I love in clothes, which are timeless,” Stanley said. “There is a style that goes back to some of the great rock ‘n’ roll bands of the 60s.”

The looks that preceded Kiss’s show-stopping appearance had a rock ‘n’ roll edge, with many stage-ready touches like gold- and silver-tone leather jackets, leopard top hats and a dramatic black jacket with pointy felt cutouts on the shoulders that gave the look a raptor-like quality.

Kiss celebrates the 40th anniversary of the release of its first album this year, and will be inducted into the Rock and Roll Hall of Fame.