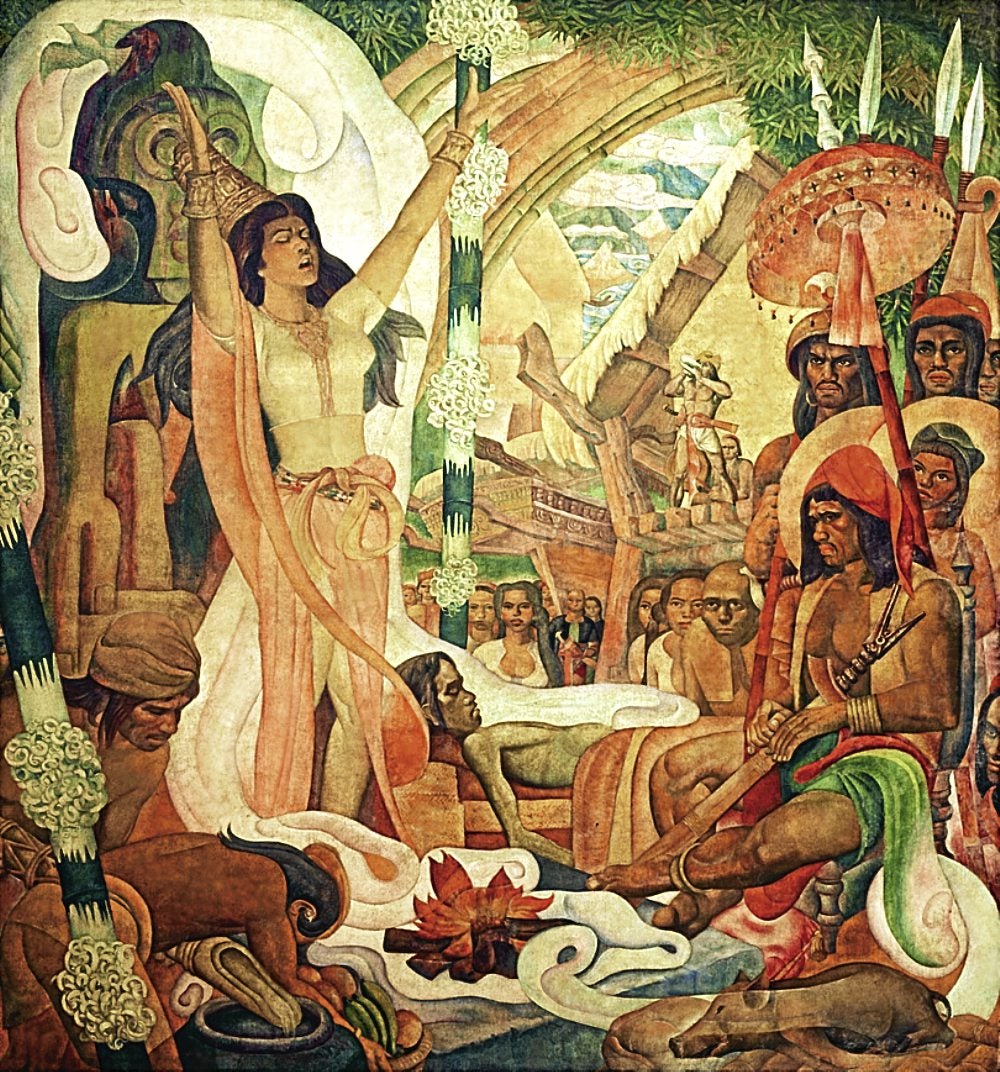 The National Museum will unveil on September 2 four restored paintings by National Artist Carlos “Botong” Francisco depicting the history of medicine in the Philippines.

During Museum Month in October, the National Museum will offer free admission.

The restoration will introduce what used to be dingy, faded works unnoticed and unappreciated by tens of thousands of daily passersby at the Philippine General Hospital lobby to younger generations of Filipinos. 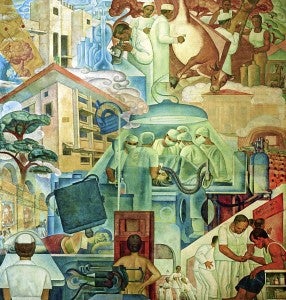 The restored works, “The Progress of Medicine in the Philippines,” will be on loan from the University of the Philippines, PGH’s principal, to be exhibited at National Museum, said Jeremy Barns, director of the museum. In exchange,  the museum would hang reproductions of the obra maestra in PGH’s lobby.

The works depicting the history of Philippine medicine, from the babaylans (medicine men and women) to the present, were commissioned in 1953 by four physicians: doctors Agerico Sison (PGH director at the time), and National Museum director Dr. Eduardo Quisumbing, in memory of their sons; Dr. Florentino Herrera Jr., in honor of his father; and Dr. Constantino Manahan.

Restorations were carried out by professor Tomas Bernardo in 1974 and in 1991. By 2006,  the works showed the effects of humidity, pollution, insect droppings and the heavy human traffic at PGH’s busy main lobby.

A thorough restoration of “the Botongs” was effected in 2006-2007 by National Museum painting conservators Roberto Balarbar,  Raymundo Esguerra,  Willie Estonanto and Ramon Macasusi,  under Orlando Abinion’s supervision. The effort was funded by the US Department of State’s Ambassadors Fund for Cultural Preservation.

Two reproductions each now hang on either side of the PGH lobby where their originals had hung, which in themselves are marvels of modern technology.  Exactly the same size—2.92 m by 2.76 m—as before, the giclee archival printing process was employed by well-known photographer and strict technician Benigno T. Toda III of Studio 58.

“It took a whole day,  practically, to clear people from the lobby,”  the man everyone calls Bengy said.  Using a 65MD digital camera,  “I set up a ladder and a very high tripod to shoot from the middle,  so there would be no distortion.  No flash, all natural light.”

Bengy’s photographic services were donated free of charge.  The museum paid for the canvases,  printing and framing.

The originals, all in a long row the better to appreciate the evolution of medicine, hang in the North Mural Hall.  It is now the Museum Foundation of the Philippines Hall, its lighting and retrofitting paid for by the foundation (whose president is Petty Benitez Johannot), and executed by Leandro Locsin and Associates’ architects. 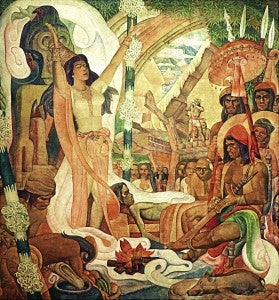 On November 23, the Senate Session Hall, restored to its original (circa 1926) magnificence,  will be inaugurated.

Apart from its cavernous aspect and a railed gallery on its second floor, high-relief sculptures of standing and seated figures 12 meters above wrap around all four walls. The sculptures were by Vidal Tampinco, son of Isabelo Tampinco.

The figures represent Datu Kalantiao, who is believed by Visayans to have created the first legal code;  Apolinario Mabini;  Pope Leo XIII whose Rerum Novarum focused on the rights of the working class; Moses (Ten Commandments); Hammurabi, whose code was among the earliest written codes of law; and Li Ssu, Chinese legalist.

Islamic philosophy is represented by Averroes (Ibn Rushd).  Solon,  the Athenian statesman and lawmaker, is there, as are Charlemagne and Hugo Grotius,  the Dutch jurist who greatly influenced international law.

Anachronisms today,  but certainly relevant under the American colonial regime, are the sculptures of the 28th US president, Woodrow Wilson, and insignias representing his country: the five-pointed star superimposed over a stripe and the American eagle.

At the restored-to-its-prewar-glory inauguration of the Senate Session Hall, the Tampinco exhibition of sculptures wrought by Isabelo and his sons, Vidal and Angel, will also open.

Isabelo was awarded two gold medals in 1888 and 1895 in Spanish expositions, and another gold in 1904 at the St. Louis Exposition. 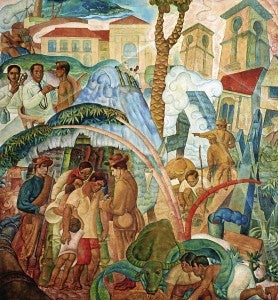 A few old homes today still exhibit samples of his fanciful panel woodcarvings,  as do the San Agustin Church and the main altar of Laoag Cathedral.

A book on the life of Isabelo Lakandula Tampinco (he was said to be a relative of Rajah Lakandula) written by Santiago Pilar will also be launched alongside the exhibition.

Originally constructed commencing 1918, the heritage Legislative Building was designed by Ralph Harrinton Doane and Antonio Toledo to be the National Library.

The renowned architect Juan Arellano (Manila Post Office, Jones Bridge and Metropolitan Theater at the foot of Quiapo Bridge were among his designs)  was called in subsequently to adapt design changes to a major part of the building.

The second regular session of the Seventh Philippine Legislature formally opened the building on July 11, 1926.  A smaller section of the structure housed the National Library. Here, too, on its front steps, the Philippine Commonwealth was inaugurated, with Manuel Quezon as president.

At the end of World War II, in acts of desperation, Japanese troops lay depth charges around major government buildings, including the Legislative Building, and blew them up.

Mercifully,  the Legislative Building’s core—the Senate Session Hall and the levels below it—withstood the depth charges;  the Tampinco sculptures were saved.

The structure became known as the Congress Building when it was reconstructed in 1950.

A floor below the Senate Session Hall, a bulletproof shield surrounded the House of Representatives Hall, built in the gunslinging late 1960s. 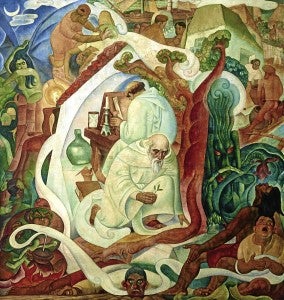 Finally vacated in 1997 when the Senate moved out (the Lower House had transferred to Quezon City earlier), it—as well as what had been the Finance Building across the street, and the one presently occupied by the Department of Tourism—was turned over to the National Museum in 1998 in accordance with Republic Act 8492.

A Victorio Edades retrospective is also planned for November.

A website on the recently slain plant taxonomist Leoncio Co will be launched during the Philippine Native Plants international conference on November 19-20.

A permanent Philippine Textile Gallery will open in December, highlighting the importance of our native weavers and their weaving traditions, fibers and dyeing methods.  It will also connect the Philippines to other Asian countries through production, transmission, exchange and consumption. The exhibit will form part of the third level’s North Wing Ethnology galleries.

Other galleries there will focus on  Intangible Cultural Heritage (music, dance, epics, syllabary, rituals and festivals); highland groups (Lumads, Igorots, Mangyans);  lowland groups; Muslims; the St. Louis World’s Fair historical collection (returned to us by the US—a fraction of a much bigger collection gathered in 1903 in preparation for the fair by American anthropologists and scientists); and a National Anthropological Archive.

The South Wing will house Terrestrial Archeology from the Paleolithic Age through to the Age of Contact, and a recreation of the Santa Ana archeological site dislodged from its original churchyard site.

Two large ground-floor galleries will exhibit Archeological Visible Storage.  They will show pottery in visible laboratories where examining, cataloguing, casting and the like take place.

Maritime Archeology will also be located on the ground floor, to include an Art Valdez-reconstructed balanghay already lying outdoors, and galleries containing the San Diego galleon’s artifacts, and, in the South Patio, maritime artifacts such as ballasts, cannon and cannonballs.

There will be a place for interisland as well as Asian maritime networks of Filipino feeder ships, Chinese junks and the like.

“The government is very supportive,” museum board member Maribel Ongpin said.  “The funding is very palpable.”

She said Barns chased after Pagcor and Philippine Charity Sweepstakes Office, mandated by law to contribute to the museum’s coffers, to cough up payments they owed.

At the opposite side of the street,  the former Finance Building comprising the Washington SyCip and the Antonio Cojuangco rooms, among many others, will become the Natural History Museum.  It will demonstrate with flora and fauna how the Philippines is a hotbed of biodiversity.

“The best way to motivate people in the museum is to try to reawaken a passion for heritage and the sharing of knowledge, and emphasize teamwork as well as the fact that the development and progress of the National Museum is very much a shared enterprise,” Barns said.

“I am squarely focused on keeping everything on track toward achieving a National Museum that will be the pride of the country,” Barns added.

As required by law, the director and all members of the board are presidential appointees. Chair of the National Museum board is Ramon del Rosario Jr. Ex officio members are Sen. Edgardo Angara, Rep. Salvador “Sonny” H. Escudero III, Felipe de Leon Jr. and Jeremy Barns.