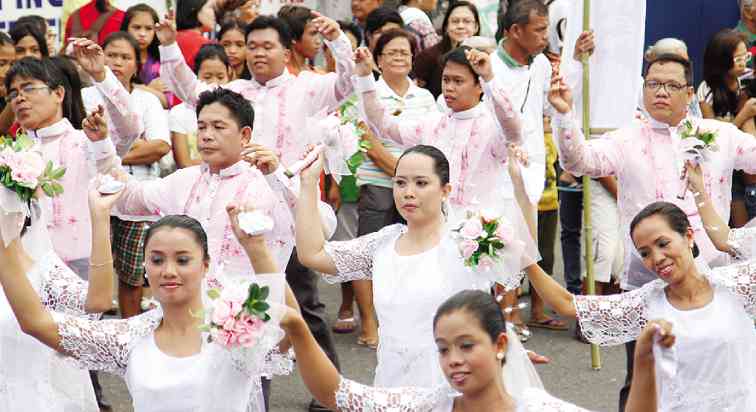 The rain fell during the opening parade of the 20th Kasanggayahan festival in Sorsogon recently, and poured even harder during the Mass. But it did not become a hindrance for the Sorsoganons to stay and attend the celebration.

After all, the province boasts of the strong faith of its people, who claim that the first Mass in Luzon was held in the town of Gibalon, Sorsogon in 1569.

“Based on what we have here in Sorsogon, we agreed that the rallying point of this Kasanggayahan festival is spiritual and historical,” Sorsogon City Mayor Sally Lee said. “It is all because the first Mass in Luzon was held in Gibalon.”

According to literary artist Abdon Balde, when Miguel Lopez de Legazpi arrived in the Visayas in 1565, he sent small expeditions to Luzon because they had learned that there is a bigger land up north.

“They sailed and chanced upon an island just in the mount of what is now Magallanes, Sorsogon. They entered a river until they landed on a town called Gibalon and then they celebrated Mass there,” Balde said.

The Kasanggayahan festival aims to highlight Sorosogon as an important center for history and culture. It kicked off with a parade from the province’s community theater group and closed with the reenactment of the first Mass in Luzon.

It has also been a tradition for the Sorsoganons every Kasanggayahan festival to participate in the street dancing of Pantomina. Pantomina is a popular dance that mimics the courtship of the doves.

“Aside from pili nuts and the first Mass, Sorsogon is known for the Pantomina,” said Lee. “It is a wedding dance but it has become a common performance during the festival.”

Kasanggayahan is a Bicolano word that could mean several things, such as happiness, prosperity, beauty, among others. The festival is celebrated every October.

Sorsoganons believe that the Kasanggayahan festival could be one of the tourist attractions of the province that could draw people from outside Bicol and the Philippines. Other attractions include swimming with the whale sharks in Donsol, island-hopping in Matnog and trekking in Mt. Bulusan.

The 2013 Kasanggayahan was celebrated in line with the 119th founding anniversary of Sorsogon province after being separated from Albay in 1894. The theme this year was “Kasanggayahan 2013: Agrikultura nan Turismo, Dalan sa Pag-uswag san Sorsogon (Agriculture and Tourism, the Way to Sorsogon’s Progress).”