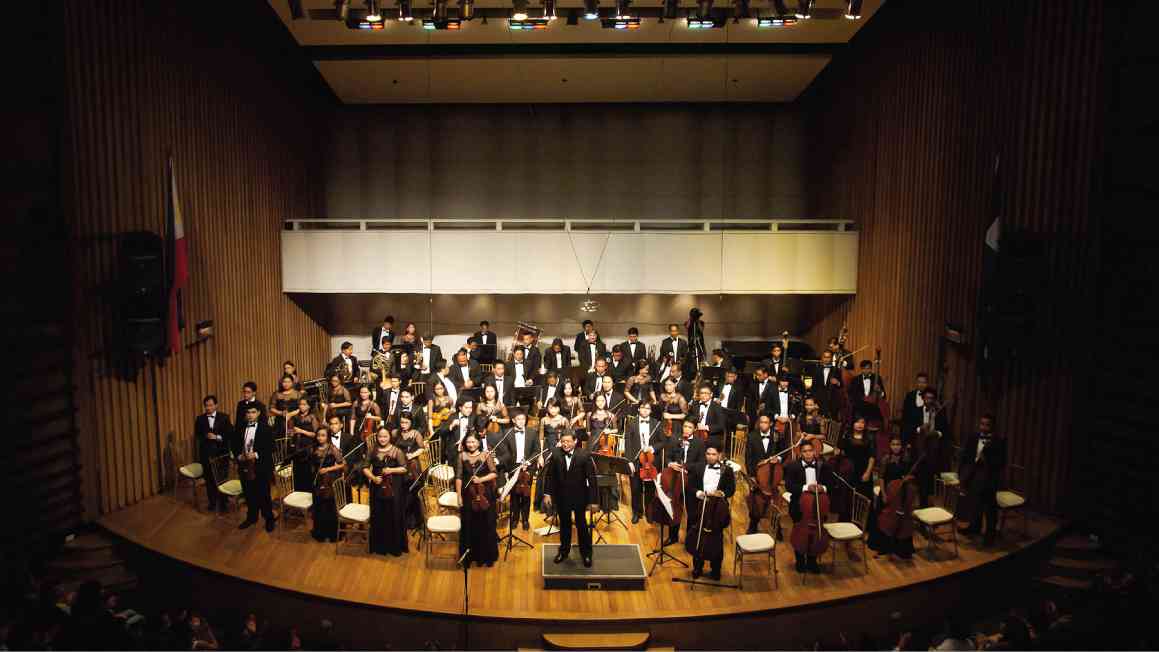 THE MANILA Symphony Orchestra at the BDO Francisco Santiago Hall. The orchestra will have its 88th anniversary concert on Jan. 18.

The life span of symphony orchestras is unpredictable as an artist’s existence. It is especially so in this country where subsidy spells the difference between death and survival.

Like it or not, the Manila Symphony Orchestra (MSO) is the country’s oldest and the most historic. Founded in 1926 by Alexander Lippay and later nurtured by Herbert Zipper who survived both the Holocaust in Europe and the Japanese Occupation in the Philippines, the orchestra will turn 88 years old this 2014.

For this reason, music lovers should not miss its 88th anniversary concert on Jan. 18,

8 p.m., at the BDO Francisco Santiago Hall in Makati City. The program includes Haydn’s Symphony No. 88; Mozart’s Sinfonia Concertante in E-flat Major for Oboe, Clarinet, Horn, and Bassoon; and Beethoven’s Symphony No. 1.

There is no doubt that Korean diva Jo Sumi’s Philippine debut on Feb. 1 is the vocal event of the year.

Like our very own Lilia Reyes, Jo studied at Italy’s Accademia di Santa Cecilia where among her teachers were the eminent tenor Carlo Bergonzi and Giannella Borelli. After graduation, she turned to another fine teacher and singer in the person of Elisabeth Schwarzkopf.

Rehearsing with the titan of music, Herbert von Karajan, for the Salzburg Festival, the legendary German conductor was so stunned he described Jo’s performance as the “voice from above.”

Karajan passed away in one rehearsal and Sir Georg Solti (Cecile Licad’s conductor with the Chicago Symphony) took over.

Jo is one of the few Asian faces who sang lead roles at the Metropolitan Opera (Oscar in Verdi’s “Un ballo in maschera”), Royal Opera Covent Garden (Olimpia in “Tales of Hoffmann”), and Chicago Lyric Opera (“Queen of the Night”).

She was a big hit at the Metropolitan Opera in Donizetti’s “Lucia di Lammermoor” and Verdi’s “Rigoletto” as Gilda.

Her voice lent its presence in the World Cup and Olympic openings, the way pianist Lang Lang made the crossover to popular music.

The good news is that Jo will be accompanied by Filipino pianist Najib Ismail on her Philippine debut at the SM Aura Premier’s Samsung Hall in Taguig.

Jo Sumi may be familiar to Filipino fans of K-Pop (Korean pop), having recently made news when she held her annual concert in Seoul, “Fantasia,” in which she invited Yang Yoseob, the baby-faced main vocalist of top K-Pop idol band Beast, to do a duet with her.

The performance combined her bel canto classical singing style with the youthful Yoseob’s honey-sweet but powerful and versatile vocals which has impressed Billboard magazine and critics, as well as earned him and Beast legions of fans from around the world.

Yoseob himself was featured in the New York Times last December for headlining the Seoul production of the Andrew Lloyd Webber musical, “Joseph and the Amazing Technicolor Dreamcoat.”