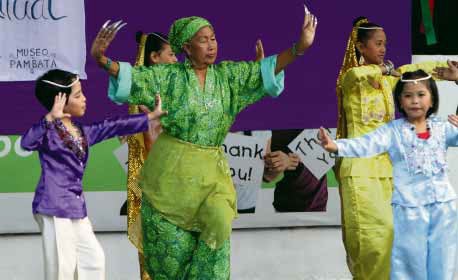 BADJAO women and girls displaced by the Zamboanga seige perform a traditional dance during an interfaith ritual at the Museo Pambata on Jan 11. ARNOLD ALMACEN

TACLOBAN CITY, Philippines—Those in the performing arts are doing their part to help ease the burdens of Supertyphoon “Yolanda” victims.

Various artist groups in Leyte came up with an activity dubbed “Panhiuli ngan Pagbabago,” a water ritual for healing and recovery, staged last Friday at the University of the Philippines-Tacloban Botanical Garden by Cancabato Bay.

UP-Tacloban professor and National Commission for Culture and the Arts (NCCA) Commissioner Joycie Dorado Alegre, one of the event’s initiators, said it was held to help not only the living but also those who perished in the Nov. 8 superstorm that claimed the lives of more than 6,000 people in Eastern Visayas, almost half of them from this city.

Participants chanted and sang as they placed boiled eggs, cigarettes, candies and tuba (coconut wine) on a balsa raft and pushed it off onto Cancabato Bay as an offering to the spirits.

As the raft floated away, the chanting and singing stopped to usher in a moment of silence.

“We (did) this ritual so we can be healed. We are reconnecting with the spirits as part of our healing process… of our people and the community,” explained Alegre in a phone interview on Saturday.

Alegre said the ritual, aimed at easing the emotional and spiritual burdens of both the living and the dead, relived an old tradition centered on appeasing or paying homage to the spirits of the water, considering that it was a very strong typhoon that killed the thousands of people.

She said the offering was taken from the “tamoy,” an age-old water ritual of Leyteños, particularly of fisherfolk from Carigara who offer food to the spirits for good weather, protection and a good catch.

Yolanda did not only “damage the physical but the spiritual world in addition to the spirits around us,” Alegre said.

The ritual, she added, will hopefully “heal all the elements of life and not just the people.”

She said the ritual was also meant to help the still “unsettled spirits,” especially the missing or the unburied, to finally find their “home,” just like the living who survived Yolanda’s onslaught.

The activity was initiated by the NCCA, Leyte-Samar Heritage Society, UP-Tacloban Campus, Museo Pambata and Citizen’s Network for Psycho-social Response.

In Manila, meanwhile, Badjao women who were displaced by the September siege of Zamboanga City performed traditional music using the agong and the kumintang as part of an interfaith ritual to signify closure to last year’s tragedies.

The “Araw ng Paghilom at Pagbangon: Isang Pahingalay,” day of healing and recovery, held on Saturday at the Museo Pambata in Rizal Park signaled the rehabilitation phase to the negative aspects brought by the four elements: Fire (Zamboanga siege), Earth (Bohol and Cebu earthquake), Wind and Water (Supertyphoon Yolanda in the Visayas).

“This is a memorial of sorts for the people who passed away and a prayer for those who survived and those who helped,” Leo Emmanuel Castro of Sanghabi told the Inquirer.

Sanghabi (one weave) is a nonprofit organization that focuses on the appreciation of Philippine cultural diversity through the use of indigenous musical instruments.

The ritual was based on the concept of pahingalay or to take a rest with God, Castro said.

The Pause Muna Peace Muna of the Brahma Kumaris also gave presentations with a song from Timmy Cruz and poetry reading by Vim Nadera with dance accompaniment by students of the Philippine High School for the Arts.

One of the key elements of the pahingalay was the use of the tambara, a platform of the Bagobo on which to place offerings during the ritual, Castro explained.

“We use the tambara to focus the thoughts and intentions of the participants of the pahingalay,” he said.

The participants then proceeded to Manila Bay for the symbolic offering.—With a report from Erika Sauler