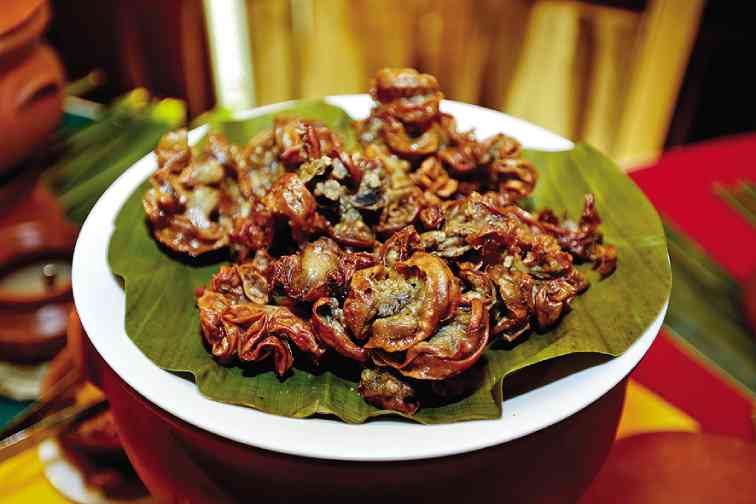 “Sugbusog is a continuation of our culinary journey which we started some years ago,” said Hans Hauri, Marco Polo Plaza Cebu general manager. “We also had international festivals, but Sugbusog focuses more on heritage cuisine. Last year, for the first time, we featured Cebu street food, and people asked for more. So, we again designated Cebuano food expert Jessica Avila to find more unique food and recipes for the festival.”

Cebuano food, added Hauri, is quite complex but complete in a sense that most of Cebu’s local produce and ingredients are well-incorporated and perfectly flavored into the dishes, even though you don’t see a lot of sauces in Cebuano food.

“So, it’s worth it to come up to Marco Polo Cebu and explore, see and taste what the island can offer. The nice thing about our Sugbusog festival is that it kicks off the year of festivals and fiestas all over the Philippines.”

Sugbusog is right in time for the Sinulog festival on Jan. 19 (grand parade). It is also one of the hotel’s ways of letting its guests experience the rich Cebuano culture and cuisine.

Along with Sugbusog, the hotel is also hosting fun-filled Pinoy fiesta games, an exhibit of antique Sto. Niños and traditional Sinulog dancing.

A brief program started with welcome remarks by Hauri, followed by the unveiling of the Santo Niño de Cebu exhibit by Ernesto “Ben” Chua and his friends. More than 20 images of different sizes, mostly antiques made of wood and plaster of paris, are on display, most of them from Chua’s personal collection.

A huge replica of Sto. Niño de Cebu that was given to Pope John Paul II is also on display in one corner of the lobby.

After Msgr. Roberto Alesna blessed the exhibit area, the San Diego Dance Troupe performed the traditional Sinulog dance near the hotel’s grand staircase. Instead of a ribbon to cut, scoops of mango-flavored taho were shared by the hotel’s executives and special guests to officially open the foodfest.

Jessica Avila, one of Cebu’s most respected culinary figures, came up with exciting street food choices.

“Street food is very casual that’s why people like it and they keep coming back,” she said.

She also presented a wide range of Cebuano specialties including the crunchiest pork adobo (almost like Ilokano’s bagnet) from Bantayan, an island off the northern tip of Cebu.

“Cebuano adobo is very dry, unlike those in other provinces that are too saucy,” Avila added.

There was also balbacua with beef knuckles and oxtail. It’s much like kare-kare minus the atsuete. The brown peanut sauce was very thick, almost sticky, and had no veggies.

The sweetish Humba consisted of pork belly, azucena (banana blossoms), soy sauce and tuba (native vinegar). The meat was braised and cooked for more than four hours to make it fork-tender.

Another interesting dish was the Tinap-Anan, a smoked fish first cooked in vinegar and ginger (paksiw) before being grilled. It was paired with slices of tomatoes, onions and tuba and salted eggs.

“To be trendy, we also have our own version of lechon belly,” Avila said.

Yes, lechon belly is the latest craze in Cebu. Marco Polo’s version has tender, flavorful meat and crunchy, roasted brown skin. The meat itself is quite lean, juicy and succulent even without additional seasoning.

The lechon belly turned out to be the best order of the night because it was freshly roasted.

More sighs of pleasure came with the rest of the courses, especially the sinugba (roast in Visayan). Diners enjoyed the barbecues—chicken, pork, chicken liver, chicken giblets.

“I use banana ketchup, soy sauce, calamansi juice and 7-Up to marinate the meat before grilling,” shared the 61-year-old Avila, who has no formal culinary background but counts a lifetime of kitchen passion she gained from her grandparents.

In between the main courses, the chicharon bulaklak, kinilaw na tanigue, balot and labtingaw (fish dipped in seawater and half sundried) also created buzz.

“As I always say, Cebuano cuisine is more than just lechon and sinugba. We have a lot of delicious stuff to offer, and these dishes are just some of them. We won’t get tired of showing our passion and love for good Cebuano food,” said Avila.