Is the foodie crowd ready for Black Sheep? | Inquirer Lifestyle 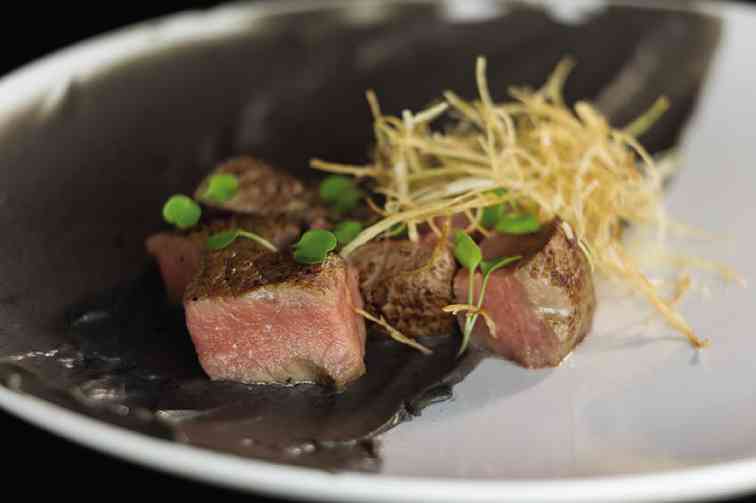 Is the foodie crowd ready for Black Sheep?

One might be forgiven for thinking that we live in a developed, rather than developing, country after a night-out at Black Sheep restaurant in the penthouse of W Building just off 32nd Street in BGC, Taguig.

The 27th floor isn’t exactly the spire of the Burj Khalifa, but it’s a lot higher than my usual haunts, and the view is certainly stunning. There’s a coveted table for five at the very corner where you can think plutocratic thoughts while sipping your single malt whisky and deciding on the color of your next Jaguar.

For better or worse, the existence of a moneyed class is necessary to support the rarefied, refined cuisine that Jordy Navarra serves up at Black Sheep.

Perhaps even more important than one’s ability to afford cuisine at this level is one’s willingness to support the artistry behind the food that is expressive, playful and complex, and like the best art, makes demands of its audience. And despite our best intentions, we do have our biases: Exotic white guy in the kitchen means we’re willing to shell out more and give greater allowance for invention; add in truffles and foie gras and we are almost disposed to pay “abroad” prices for a local restaurant.

Not only is Mr. Navarra  very much a Filipino—though he has spent time abroad, notably at The Fat Duck in England and Bo Innovation in Hong Kong, both of which I have written about—he is also determined to make his new restaurant a Filipino one, though this isn’t how most people would describe the meal  he serves up.

Despite the liquid nitrogen and the sous-vide pouches bubbling away in immersion circulators, the food is Filipino.

Take the soup: A dashi broth bursting with umami poured over fish bones turned out to be made from tinapa, while the accompanying scallop was garnished with wood sorrel flower foraged from one of the unbuilt lots in BGC. It doesn’t get much more local than that.

The wagyu is the well-established and reliable Kitayama (which many other restaurants use).

The chocolate in the parfait is a single-origin Malagos cacao from Davao, which was unexpected because I’ve rarely had a local chocolate that wasn’t scorched, poorly processed, or lacking in the range of its bouquet.

This is the state of the art of Filipino food pushed to its limits. It’s as cerebral and original as it is delicious.

False notes? I have minor gripes, like the bar not having iced tea (though they did make some tea and served it over ice). I would have liked the wine list to be as long and compellingly comprehensive as the single malt list they presented  us.

But I guess this is like criticizing a salmon for not being a sturgeon; the  place was conceptualized as a single malt haven, after all. (I like my single malts, but I like them alone and in the dark.)

And unless you get the Chesterfield armchairs at the corner table or in the pod floating above like one of the boxes at the Galactic Senate, the banquettes can get a little uncomfortable over the nine courses.

All in all, I’m not sure how well the cuisine blends with the clubby bar atmosphere, which starts around 10 p.m. on weekends.

Although this was as close to a perfect meal that my wife and I have had in a long time, the question must be asked: What next?

Unlike The Fat Duck, which has a steady stream of international pilgrims to complement the hedge fund managers whose secretaries booked them the three-month-wait table, Black Sheep must court a crowd of returning diners if it is to stay solvent and relevant.

Since the menu is autocratically fixed (with minimal variation in that you can choose whether to spring for the wagyu at  extra charge or not), the weird, quirky eaters who don’t eat anything green, or eat only fish, have been weeded out, so Mr. Navarra, in theory, could change the menu everyday. Not just bits of it, but the whole thing.

This is a nightmare when it comes to planning in the kitchen, of course, all the way up to the chain of suppliers. To make a major menu change, it can cost a restaurant tens of thousands of pesos in produce thrown away. But it spells the difference between it being a restaurant which I return to only for special occasions, and one that is perpetually fresh and  interesting, which I would check out frequently to be surprised.

The shock of the new, which is Mr. Navarra’s ace, demands that it be new for me to be shocked.

But we might be getting ahead of ourselves. Mr. Navarra is ready to take on the dining establishment and give a hint of what is possible when one  tests the limits of Filipino cuisine.

But is the clientele, with its megalomaniac requests and tyrannically short attention span, ready to be constantly challenged by a changing menu and pay for creativity and unusual flavors, rather than for expensive-sounding ingredients?

Although we Filipinos pride ourselves on being very exacting, we can also be a bit insular with our tastes, especially when we are in our home country.

I believe that the way is onward and upward rather than back, and that having stuck his neck out, Mr. Navarra should play to the foodie crowd rather than to the A1-hot-steak-sauce customers.

All this, however, should be next month’s problem. If you are at all interested to see Filipino food pushed to its limits, you owe it to yourself to pay this restaurant a visit.