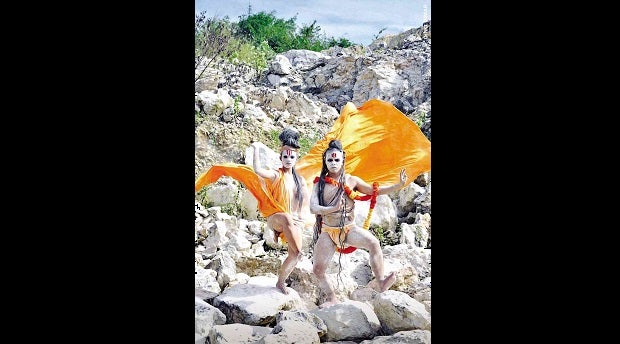 Like the “Ramayana” (think “Rama Hari”), that other Indian epic “The Mahabharata” is one of the glories of world literature. It is said that “what is not found in the Mahabharata is not to be found anywhere else in the world.”

In film and on stage, there have been many adaptations of the epic in various languages, including a legendary production (based on the film by Peter Brook) which took two nights to perform and was set in a stone quarry in France.

In 2010, the playwright Floy Quintos wrote a version for the Ateneo Children’s Theater, titled “Ang Nawalang Kapatid,” with music by Ceejay Javier, direction by JJ Ignacio and a set design by Joe Tecson inspired by the Ajanta Cave paintings.

Now, Dulaang UP is staging “Ang Nawalang Kapatid” in a version more suited to an adult audience. The libretto by Quintos and the music by Javier have also been correspondingly revised. Dexter O. Santos directs and, being a choreographer, has added many dances and rituals from Southeast Asia inspired by Indian culture.

The music of Javier “has also undergone dramatic transformation,” says Quintos. “Heavier, more dramatic arrangements of the songs, done live by a five-piece band, with only touches of sitar and tabla, will now replace the prerecorded music of the earlier production.”

Javier himself describes his music as “a fusion of pop-rock-world music. I don’t really know how to brand my music. It’s a byproduct of different genres I have been exposed to.” 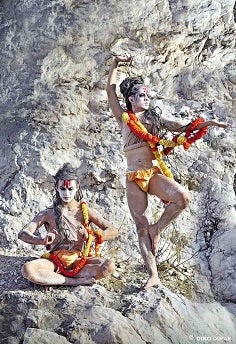 “The current Dulaang UP production owes much to the Ateneo Children’s Theater and to the Ateneo Grade School for allowing the use of the material, which has of course been rewritten to allow for more of the complexities and key scenes of the epic,” says Quintos.

Retold in its simplest terms, the plot is about the great war between the Pandavas and the Kauravas clans, which begins with a simple game of dice.

“Enriching the basic, like so many flourishes in an Indian bas-relief,” the librettist points out, “are stories of gods and men, seductions and betrayals, mysterious transformations, mythic animals, divine weapons and political machinations.”

In the tale, Yudhisthira (Abella) loses his rights to the kingdom in a game of dice and the great war begins. Karna (Pesigan), unaware that Yudhisthira is his half-brother, is forced to fight his own brothers.

And Quintos found the peg he was looking for: “That was it! That was the emotional and so very Pinoy ‘hook’ that I was searching for. ‘Ang Nawalang Kapatid’ was the title that instantly came to mind. And it would be a piece about loyalties tested and ties spurned by power, lust and violence.”

What director and playwright agreed on was that their India would be “tribal, proto-historic, more mythical, more mystical, an India of endless possibilities and cross-references.”

Says Quintos, “The great Southeast Asian epics (our own Hudhud and Labaw Donggon included) are like that. They live again with each retelling, with each embellishment.”

At the end, Karna and Duryodhana (Vince Pajara) die. Yudhisthira reflects on his mortality: “How shall I spend the last moments of my life? Should I remember my mistakes and practice contrition? Should I forgive those who have harmed me? Should I ask forgiveness of those whom I have harmed?”

Quintos concludes: “It is reflections like these that convince me of the immortal and universal power of the ‘Mahabharata,’ and the richness of the epic and its characters.”