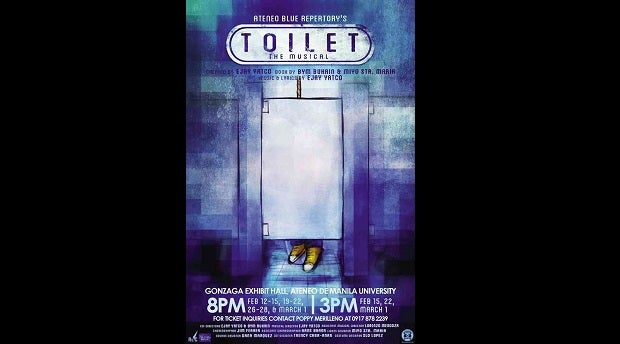 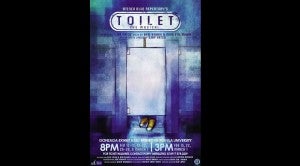 “Toilet: The Musical” is about the “lives of eight seemingly ordinary students” but each has a “secret to disclose within the cold confines of the toilet walls,” says Yatco. “It’s a story about the inevitable painful experiences one must go through in high school in order to ‘grow up.’”

Fred Lo and Justine Peña, who head the cast, were previously together in two shows last year—as the Prince and Cinderella, respectively, in Resorts World Manila’s Full House Theater Company’s “Cinderella,” and as Topper and Gabbi in Culture Shock Productions’ “Sa Wakas.”

Yatco arranged the music for “Sa Wakas,” a jukebox musical that featured the music of the pop-rock band Sugarfree. His recent credits also include pianist duties for Atlantis Productions’ staging of “Disney’s The Little Mermaid.”

He also competed in last year’s World Championship of the Performing Arts and won three silver medals and one gold. Yatco was a member of Ateneo Blue Repertory when he was still in college and handled musical direction duties for its productions such as “Hair” and “Little Shop of Horrors.”

“High school is that point in life that many adults consider to be the epitome of shallow problems—pimples, crushes and popularity, as well as a vast collection of other hormone-driven dilemmas,” Yatco says. “However, it’s also where deeper and darker problems are kept secret.”

The musical will touch on topics such as suicide, unrequited love, religious differences, eating disorders, sexuality, and the fear of what the future holds.

“But it will also show the light at the end of the tunnel, and the struggle to remember that there are no real endings, just new beginnings.”