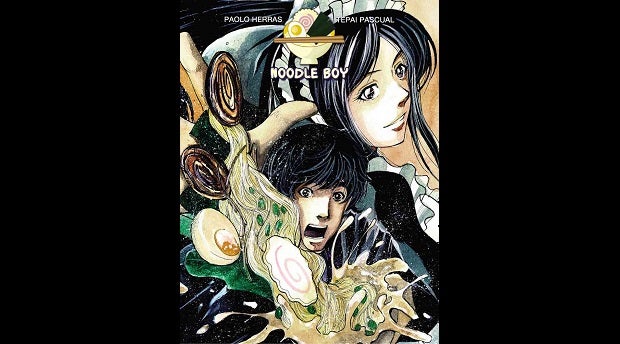 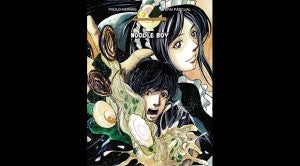 There is an unmistakable attraction to a full bowl of Japanese noodles accompanied by vegetables and other trimmings. But in the comic book “Noodle Boy Chapter 1: Love at First Taste,” the ramen represents much more than physical nourishment.

Written by Paolo Herras and illustrated by Tepai Pascual, “Noodle Boy” had previously been seen as a webcomic on www.neverheardwebcomics.com. But “Noodle Boy Chapter 1: Love at First Taste,” published by Meganon Comics, features more than 60 pages, much of which has never been seen before.

Carlo is an ordinary cubicle dweller who is still aching from a broken heart, something he associates with rice. “I was all about rice,” he recalls. “Until one day, rice left me for some other guy.” But hope springs eternal as Carlo is now obsessed with steaming hot ramen; one day, he literally runs into a pretty Japanese girl named Ayumi and discovers a new ramen place called “Ramen Oh!” Coincidence? Not a chance as Carlo, the titular “Noodle Boy,” quickly dubs Ayumi “that pretty ramen girl.” He thinks, “Just maybe, there’s a chance this tired empty bowl can be filled once more.”

That’s the setup and then “Noodle Boy” explodes into a completely unexpected, vigorous second chapter that will have readers laughing out loud as they flip the pages.

Ayumi works at Ramen Oh! with a colorful group of girls named Mady, Junnis and Bella. There’s much going on in “Noodle Boy,” including discussions about ramen, an eventful trip to an otaku convention, a secret identity and, yes, hand-to-hand combat. It also ends on an even more unpredictable cliffhanger. It’s a ramen-flavored riot.

Herras’ comedic script demonstrates precision and Pascual’s manga-inspired art is kinetically inspiring—especially when the ramen hits the roof. It’s full of little details that remind you of its manga and anime roots.

But it’s also an authentically new tale. Carlo is a winning everyman and “Noodle Boy” takes him into a surprising direction even as Ayumi is given a uniquely culinary issue to deal with. Readers will look forward to seeing the unusual romance grow between the two.

While staying true to its Japanese influences, the comic book is also a Filipino creation. Polished and genuinely hilarious, “Noodle Boy Chapter 1: Love at First Taste” is charming and offbeat, the kind of comic book that should gain a good following and have readers hungry for the next serving.