Sinulog: A fiesta of faith and gratitude | Inquirer Lifestyle 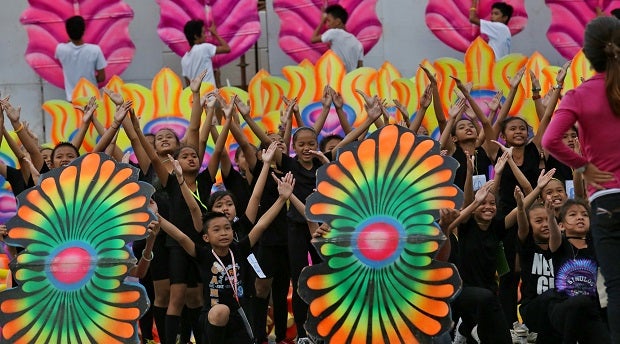 Sinulog: A fiesta of faith and gratitude

For years, devotees of the Señor Santo Niño have been coming to Cebu City from all over the country to show their gratitude and fidelity to the Holy Child in the nine-day Sinulog festivities that culminate in a grand parade Sunday.

But for many, this year’s celebration has become doubly meaningful because of the catastrophic disasters that the country suffered in the past few months, particularly for those coming from the areas devastated by Supertyphoon “Yolanda” and the 7.2-magnitude earthquake last October.

The theme of this year’s Sinulog festival is “Faith Withstands All.”

A total of 65 students of La Paz National High School are joining the Sinulog 2014 to thank the Holy Child, colloquially known as the Sto. Niño, for keeping them safe, said teacher Bonifacio Ursal, who is in charge of music, arts, physical education and health (Mapeh) of the Bogo City schools division in northern Cebu.

At least 11 residents died and 35 were left injured by Yolanda in Bogo City. Most of the buildings of the 34 public schools in their division were left without a roof and still have to be repaired, Ursal said.

Because of budget constraints, Ursal said the division has had to recycle and improvise costumes from Bogo City’s “Pintos” festival for the children participating in the Sinulog.

“Our students never complained because to them, joining the Sinulog is our way of thanking the Sto. Niño for keeping us alive,” he said.

Another group composed of students, out-of-school youth, overseas workers and fishermen came from Placer, Masbate, to dance the “sinulog” in today’s grand parade.

Placer Mayor Joshur Judd Lanete II said about 900 people from his province had joined the “pilgrimage” to Cebu in thanksgiving to the Sto. Niño for sparing them from the wrath of Yolanda, which cut a swath of destruction through the Central and Eastern Visayas.

Lanete said the Bicol region was among those identified to be on Yolanda’s path, but the supertyphoon changed direction, hitting Leyte and northern Cebu instead, a miracle which he attributed to the Sto. Niño de Cebu.

“Although 2,000 houses were damaged in Placer, we cannot complain [when we] look at Tacloban and Bantayan [island in Cebu],” he said.

Lanete attributes the greatly reduced “visits” of typhoons to his fourth-class municipality to his town mates joining the Sinulog in Cebu for the past three years.

“When we started, it was hard to convince them to join our pilgrimage to Cebu. But the Sinulog become personal to them after [Yolanda],” he said.

With so many devotees and tourists coming to Cebu for the festival, the city’s hotels, pension houses and inns are all fully booked.

For some years now, the city government has been putting up devotees who are unable to find lodgings in inexpensive temporary accommodations.

This year, the city government has set up a so-called “devotee city,” consisting of 130 20-foot containers at the Compañia Maritima grounds just across the Cebu City Hall.

Councilor Roberto Cabarrubias, who is in charge of the devotee city, said he expected between 3,500 to 4,000 devotees to use the temporary shelter this year.

In the past, devotees without any relatives in Metro Cebu usually slept on the sidewalks until the city government decided to put up a temporary shelter during the festival.

Ricky Ballesteros, the executive director of the Sinulog Foundation Inc. (SFI), said four contingents from the typhoon-devastated Leyte towns of Alangalang, Abuyog, Dulag and Tanauan in Leyte have begged off from joining this year’s Sinulog as they want to focus on their recovery programs.

The groups from Leyte often land in the top five in the free interpretation category of the Sinulog dance contest.

Ballesteros said 130 participants had signed up for this year’s Sinulog grand parade, against last year’s 142 contingents.

Cebu City Mayor Michael Rama said that rather than worry about the reduced number of out-of-town participants, Cebuanos should be thankful for having survived the destructive earthquake and the typhoon.

“The bigger problem happens if we will no longer have the Sinulog,” said the mayor who is overall chair of the festival.

“The Sinulog should perk up people and bring light to all. This is a sign of hope for everyone,” said Rama. With reports from Carmel Lois Matus, Carine Asutilla and Jason Baguia, Inquirer Visayas