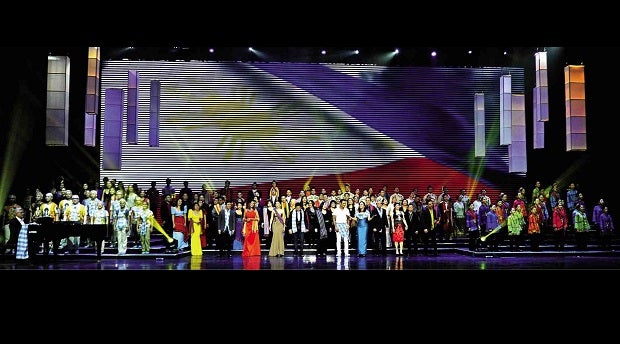 VOICES FOR VISAYAS: More than 100 artists sing in the benefit concert for victims of Supertyphoon “Yolanda” at Newport Theater, Resorts World in Pasay City. PATRICK UY/CONTRIBUTOR

Roughly two months after Supertyphoon “Yolanda” caused death and destruction of horrifying proportions to Leyte, Samar and other parts of Central Philippines, the task of rebuilding lives and their land looks daunting.

But there is reason to feel upbeat, especially since help is coming from all directions, including concerned private citizens banding together to stage benefit concerts. In fact, in the succeeding weeks after Yolanda struck, numerous gigs in small clubs as well as shows in major venues were held to bring relief to the storm survivors immediately.

The most recent one, “Voices for Visayas,” held last Wednesday at the Newport Performing Arts Theater of Resorts World Manila, raised P18 million from ticket sales and pledges—all of which will be coursed through the Philippine Disaster Recovery Foundation (PDRF) for the rebuilding efforts of Gawad Kalinga and Habitat for Humanity in Yolanda-ravaged communities.

The benefit show was particularly noteworthy because it involved more than 100 Filipino musical artists, some of whom are affiliated with rival broadcast networks, and dozens of professionals from various sectors who threw their support behind the cause.

“Voices” was a concert that sent a compelling message to the audience, as well as everyone who worked for it at the forefront and behind the scenes: The goal of helping others must be achieved with no strings attached.

This meant that all the artists in the lineup performed pro bono, as announced onstage by the concert’s lead organizers, Emmanuel Miñana and Nanette Medved-Po.

Even the rental for the venue and fees for the rest of the production requirements, such as lights and sound system, were waived.

Cash sponsorship from a number of big corporations helped assure the organizers that the beneficiaries would receive a substantial amount.

At the onset, we thought that the show would suffer from the drawback of not having a live band to accompany the singers. But fortunately, the performers’ energy and enthusiasm, not to mention their sheer talent, made singing minus-one at such a high-profile event still a joy to watch.

Some of the standouts: Jed Madela unleashing his seamless soprano in “I Believe”; a series of duets featuring an ageless Pilita Corrales and confident Chad Borja in “Usahay”; Mitch Valdez and Bituin Escalante exhibiting theatrical flair in “Waray-Waray” and “Balut”; Isay Alvarez and the Ryan Cayabyab Singers in an excerpt from “Katy”; Robert Seña, Karylle and Ballet Philippines dancers in a production number from “Ramahari”; opera singers Rachel Gerodias and Andrew Fernando soaring high in “Gaano Ko Ikaw Kamahal”; The CompanY with Menchu Lauchengco-Yulo and Audie Gemora in animated renditions of “Big Beautiful Country,” “Isang Dipang Langit,” “Suwerte-Suwerte Lang,” “Manila” and “Hahanapin Ko.”

It was likewise wonderful to see Kuh Ledesma not being allowed to ramble on with her infamous religious spiels and sticking instead to what she does best—sing in her velvety voice, in this instance, interpreting “Somewhere (A Place for Us)” as if Barbra Streisand never existed.

The show appeared to have peaked with Martin Nievera’s reassuring version of “What a Wonderful World” and Leo Valdez and select members of the Philippine Madrigal Singers in an a cappella number.

But these were followed by a new song, “Just Believe,” written by Ryan Cayabyab and José Javier Reyes, that showcased the entire company in a rousing finale—never mind if they were lip-synching the lyrics, perhaps due to the lack of time to rehearse the tune as a live track.

Miñana himself told the Inquirer that the production team had only five weeks to mount the show.

Even so, “Voices for Visayas” rightfully deserved the crowd’s standing ovation.

“We’re in this for the long haul,” intoned Jim Paredes, who emceed the program with Iza Calzado.

It sounded like more “Voices” are in the offing.