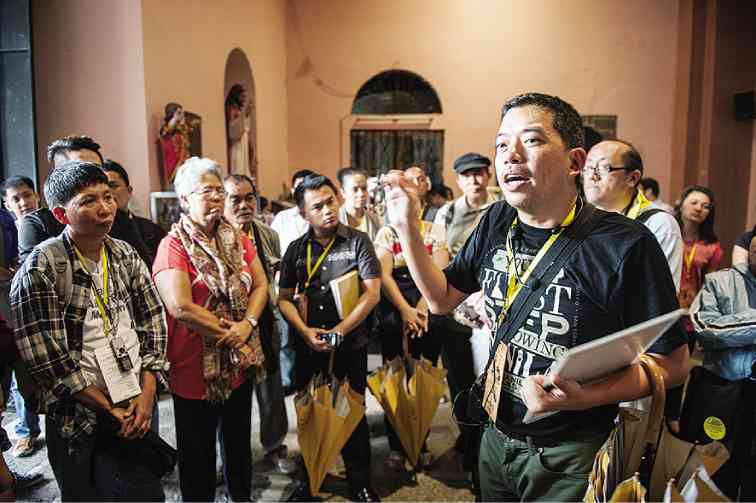 The district of Binondo in Manila is the oldest Chinatown in the world. It has a rich history and heritage dating as far back as the early decades of the Spanish colonial period.

It boasts not only the best and authentic Chinese cuisine in town but also landmarks, relics and ancient practices of cultural and historic significance, some of which are not known to many.

“Chinatown played an important role in the growth of Manila,” said Ivan Man Dy of Old Manila Walks. “For the first four centuries, this was the center of trade and commerce in the city. This was also the first stop of the Chinese  immigrants who settled and found a new life in Manila. With the coming of these immigrants, a new culture was introduced that enriched the melting pot of the city.”

Dy, who conducts guided  tours  in Binondo mainly for foodies, had an off-the-beaten-track tour of Binondo recently. He toured participants of the national conference on cultural heritage mapping hosted by the University of Santo Tomas. Dy himself is finishing his Master of Arts in Cultural Heritage Studies in UST, Asia’s oldest university, whose founder,  Archbishop Miguel de Benavides, had earlier ministered to the Chinese of Binondo and who himself learned Chinese for his missionary work. As a result, a street in Binondo is named after him.

Participants were greeted by a lion dance upon arrival at the Ramon Ongpin Monument on  the corner of Ongpin and Quintin Paredes Streets.

First stop was the Minor Basilica of  San Lorenzo Ruiz.

Originally built in the late 1600s, the church was demolished and a bigger one was constructed in the 1700s to make way for the growing population. It was destroyed during the Second World War, in which only the façade, including the belfry and the Ongpin Street side, remained standing.  The church was reconstructed.

“Today, the church still stands as a historical reminder and serves the religious needs of the both Tsinoy and Tagalog communities,” said Dy. “For me, it is an anchor to Chinatown’s past.”

Interestingly, the side chapel of the church near the entrance contains the painting of Nuestra Señora de Santisimo Rosario, perhaps the oldest colonial painting in the country.

The church floor is also interesting. Pieces of tombstones with Chinese and Latin texts form part of the floor, especially near the main door. The same tombstones  are used as plant boxes in the nearby Sta. Cruz Church and as pavement in UST’s open grounds, declared a National Cultural Treasure by the National Museum.

In front of the church is Plaza Calderon de la Barca or the Plaza San Lorenzo Ruiz, which used to be the biggest square in colonial Manila.

Ivan Man Dy shared some interesting, less-known facts about “the district originally established by the Spanish colonial authorities and the Dominican missionaries to encourage the conversion of the early Chinese immigrants to the Christian Catholic faith.”

“Binondo is not entirely Chinese, as most people think,” said Dy. “It’s actually multiethnic with other local regional groups populating the district. A lot of the food sellers are actually Kapampangan.”

According to Dy, there was once a famous umbrella maker on that street in the 1900s, and somebody must have coined that word and it stuck.

“Some streets in Binondo are still called by their Hokkien names by the old timers,” he explained. “They’re not necessarily directly translations of the Hispanic names but, in my opinion, they can be seen in the light of how the early immigrants viewed the spaces that they inhabited, thus making them their own.”

Other places which have Chinese names include Quintin Paredes Street, called Chiu Wah Hua, which means something like a canal or estero embankment where goods are unloaded; Benavidez Street, named Tiong San Kue because the old Mainland Chinese Nationalist party had its institutions on the street; Calle Nueva or Yuchengco Street was Ao Kue-Ya or the back street since it was an alternative back road to Rosario Street, which was the main street back then.

“Unfortunately, not many Tsinoys remember the significance of these streets’ names,” deplored Ivan Man Dy. “When the city government put up the street signs years ago, they decided to do a bilingual Spanish-Chinese but nobody researched the history of the Chinese names; hence, they ended up putting just transliterated Chinese names which did not have any historical significance whatsoever to the original meanings that the old Chinese community referred them to be.”

The buildings of Binondo, which look like  ordinary structures outside, hold secrets inside, particularly on the upper floors.

A building can have a family clan temple, which is a family association hall akin to the Rotary Club but formed on the basis of family ties.

These temples are bastions of immigrant culture with largely social and cultural functions. One of their functions then was helping new Chinese immigrants settle down in their new-found community.

The oldest Chinese Buddhist temple, the Guan Sheng Fu Zi temple, is located on the upper portion of a building on Kipuja Street, the same spot where the original temple built in the late 1800s once stood. It is one of few places where the traditional Chinese opera kaoka is performed.

To quote Anson Yu, also of Old Manila Walks, this dying art “continues because of its spiritual function: On feast days, temples hire troupes to entertain the Taoist deities.”

The next level, according to Dy, is to “have the LGUs understand the significance of cultural assets within their neighborhood. That way they can be guided by this knowledge on how to properly manage their constituency with regards to making their designated areas a better place for the people living within the community.”

He explained that Barangay 289 under chair Nelson Ty has embarked on an infrastructure improvement, while at the same time putting up CCTV cameras, as well as posting barangay tanod, thus enhancing security and making Chinatown more tourism-friendly.

But tourism marketing should be based on the cultural strengths of Binondo.

“Through our Chinatown Cultural Mapping Project,” said Dy, “we are also making them (local leaders) aware of the cultural resources that they can tap into to highlight the cultural uniqueness of the place in the context of Manila.”