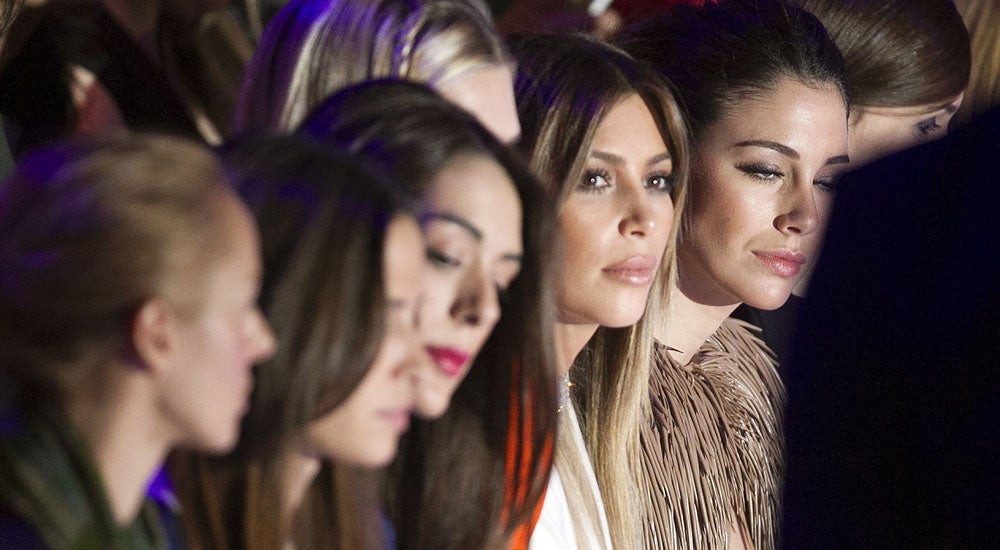 Here are some key moments:

She’s been around Paris in recent days, snapped with her partner rapper Kanye West at Versailles Palace, once the seat of French monarchy. Now Kim Kardashian has hit Paris couture week, holding court herself in the front row of the Stephane Rolland show.

Although she arrived without West, who was seen last week at Givenchy, and refused to speak to the press, her arrival triggered a media storm, with photographers pushing each other and shouting angrily to get a clear shot.

It was not your run-of-the-mill Paris sports club. It was Chanel haute couture.

If the spring-summer show felt less vibrant than recent colorful Chanel displays, it was down to the more muted pearly and silver palette. But the detail of the clothes certainly packed a punch.

Lagerfeld said he wanted the sneakers to “bring couture back to reality.” And in that he succeeded with panache.

Pithy-tongued Lagerfeld often likes to pontificate on politics. On Tuesday he called French President Francois Hollande “cruel and heartless” over the allegations by a French magazine that Hollande had an affair with French actress Julie Gayet.

Hollande’s live-in partner and first lady, Valerie Trierweiler, was hospitalized for several days after the revelations due to stress.

“When we talk about violence against women, the way (Trierweiler) was treated I am very much against,” Lagerfeld told The Associated Press. “You cannot do that to a woman you’ve spent so many years with. This I think is cruel and heartless.”

Trierweiler, who attended Chanel’s last haute couture show in July, did not appear at Tuesday’s show.

Still, Lagerfeld said he liked Gayet, calling her “a nice person” with “a nice face.”

The exhaustive 54-look-strong collection had a vintage feel with head silk wraps that sometimes glistened with embroidered jewels. They endowed the slow walking models with a nostalgic, Hollywood glamour.

But Armani, who has been going ethnic of late, chose to go East this spring-summer with the rest of his collection.

The show was set to soothing, jazz music. The slow pace got the better of two older gentlemen on the front row who slept through the entire show.

Stephane Rolland in search of sunshine

The designer, whose signature style venerates the natural beauty of fabrics like fine silk gazars and organzas, channeled vivid cadmium and canary yellows in his show, set off by a dash of white and black.

But what defined this particular Rolland show was that it moved in a delicate direction, uncluttering the silhouette by doing away with the aggressive spiked appliques of previous seasons.

Sweeps of silk flowed away from the body, providing a beautiful architectural look. And the final bridal gown had a great, organic fabric flourish in the back that really it made it feel like couture week.

One cross grain-woven coat had appealing thick asymmetrical lapels that flapped in front. But metallic pants were an odd choice to pair with looks that featured several textures and styles, like one black, sleeveless fur coat with big red lines on the side.

Still, the show featured some luxurious items like a long, plunging silk gown in royal blue.

Kim Kardashian reveals she and West having a girl