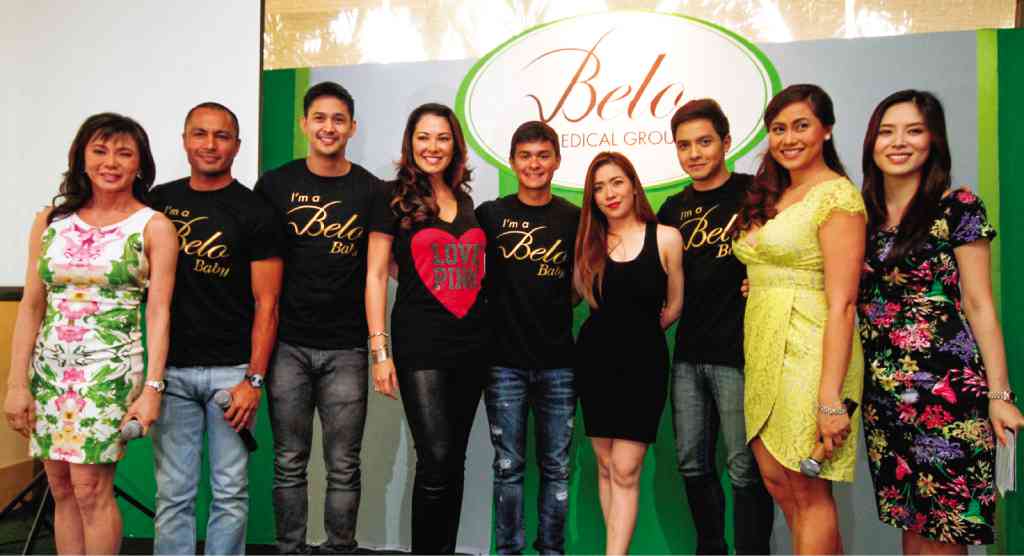 A growing number of people the world over, including Filipinos, are embracing a host of noninvasive beauty procedures such as acupuncture, vitamin infusions and juice diets in their quest for beauty, fitness and the elusive fountain of youth, said Dr. Vicki Belo, owner of Belo Medical Group (BMG).

“The technology is already there,” she said. “We might as well make use of it.”

In a media lunch last week which Belo hosted in her Makati home, the “doctor to the stars” shared the limelight with her celebrity endorsers such as Derek Ramsay, Tom Rodriguez, Matteo Guidicelli, Alden Richards, Edward Mendez, Ruffa Gutierrez and Angeline Quinto.

The event coincided with the launch of “Your Dream Body Come True,” Mendez’s first fitness book with an intriguing tagline encouraging readers to “eat more, exercise less” if they want to shed fat, build more muscle and reshape their bodies.

Mendez is the fitness consultant of Sexy Solutions, sister company of BMG, which focuses on noninvasive procedures and holistic approaches to beauty and fitness.

Offering information on proper diet, exercise, and the role metabolism plays in one’s appearance and health, the book is available in all BMG and Sexy Solutions branches.

Belo enumerated the most popular beauty procedures in 2013, which are likely to be more in demand this year, as more and more Filipinos become conscious of their looks at a younger age, she said.

Since resorting to invasive procedures such as surgical facelifts and liposuction is deemed too drastic, many are now exploring cheaper and less risky alternatives with almost no downtime.

Acupuncture and RevLite —These twin procedures, which Belo said are “selling like pan de sal,” complement each other to achieve an overall tightening of the facial skin and muscles.

“Even if you tighten aging skin, it would still eventually get weighed down by sagging facial muscles,” Belo said. “Muscles, after all, are heavier than skin.”

Before she tapped acupuncture, an age-old Chinese tradition involving needles inserted into various parts of the face and body, there was nothing much Belo could offer clients looking for noninvasive alternatives for tightening facial muscles.

While popular lunchtime procedures such as Ulthera, Thermage, Fraxel and even RevLite address uneven skin and wrinkles, these machines do almost nothing to address the muscles.

“The only noninvasive procedure that causes facial muscles to contract is acupuncture,” said Belo. “And it takes only 15 minutes.”

Clients usually undergo RevLite once a week for a month. But the procedure has also been proven effective in improving and tightening skin in other parts of the body.

“When you get older, your skin and muscles get loose and veins get dilated and more visible,” said Belo. “By tightening the skin, RevLite also helps diminish the appearance of veins in various parts of the body.”

Embedded protein thread—Acupuncture may be fast, hassle-free and almost painless, but its tightening effect is limited to one to two weeks, said Belo.

For a more permanent fix that could last a year, she recommends an embedded protein thread procedure.

Just like acupuncture, the procedure involves pricking the skin with needles—at least 40 needles per treatment. But this time, a so-called protein thread is attached to each needle. When a needle is removed, the protein thread, which would continue to stimulate skin and muscles, gets left inside.

“The procedure also restores volume loss in the face and addresses problems like loose facial skin and jowling,” Belo said.

Regenlite—Regenlite, which Belo described as a “revolutionary” machine from the UK, is unlike other laser machines, which relies primarily on light to “contract and burn” the skin.

“Since this machine stimulates the immune system, it’s ideal for people with acne-prone skin,” she said. “There’s a bit of heat, but as a whole, the five-minute procedure is quite painless.”

The machine emits a so-called beta-transforming factor, which kills porphyrin, a substance that bacteria feed on. Once you deprive bacteria of its “food,” they die, leaving the skin almost blemish-free.

“People with moderate to severe acne don’t have to take oral medications like Accutane to control their pimples,” said Belo. “And unlike Accutane, which has high doses of vitamin A that dry the skin and could harm the liver, Regenlite doesn’t have any of these side effects.”

The client starts seeing results in the fourth session. Regenlite even helps obscure old pimple scars, which Fraxel can no longer address.

Vitamin infusions—Since a growing number of people like celebrity athlete Matteo Guidicelli are now into wellness and prevention, Belo has also seen an increase in demand for vitamin infusions. As its name implies, the hour-long bimonthly procedure allows clients to absorb a cocktail of multivitamins intravenously instead of orally.

“People have long been into vitamins,” she said, “but many studies show that a great deal of vitamins taken orally only end up in the stomach until they’re flushed out of your system. Infusing them directly into your bloodstream is quicker and more effective.”

A typical cocktail of vitamins includes vitamin C, vitamin B, selenium, zinc, collagen and various trace minerals. They’re known to boost the body’s immunity against certain diseases while leaving the skin with a healthy glow.

For quicker results, Belo also administers glutathione (a vitamin beneficial to the liver, which is also proven to whiten skin) intravenously. The procedure complements the client’s oral intake of glutathione tablets.

“Instead of doing them separately, combining oral and intravenous glutathione hastens skin whitening,” she said.

Wet and dry dermabrasion—“We’re often too focused on facial skin that we sometime forget to address skin in other parts of the body,” said Belo. “I now have the solution to that with a new machine I introduced last year.”

The machine is capable of sucking out dirt and dead skin on the arms, legs and body. It then infuses the skin with hyaluronic acid to soften and remoisturize it.

“It makes your skin other than facial skin firmer and softer,” she said. “Belo now offers it for the entire body. But the procedure is only available to female clients.”

Juice diets—Cristalle Henares, daughter of Vicki Belo and head honcho of Sexy Solutions, has also seen a spike in demand for their cleansing, “fat-melting” and detox drinks formulated by resident nutritionist Nadine Tengco.

Clients take six different bottles of juices and a small bowl of “nondairy” pumpkin cleanse soup throughout the day over a period of three days. Sexy Solutions delivers right at their doorsteps.

“Made from such ingredients as spinach, ginger, lemongrass, mint and bananas, the juices and soup are nutritious enough and designed to keep you full all day,” said Henares.

Sexy Solutions promises clients who go through the diet that they would lose one to two pounds per day or at least five pounds by the end of the three-day program. It was designed for people who want immediate but temporary results in time for a specific event or occasion.