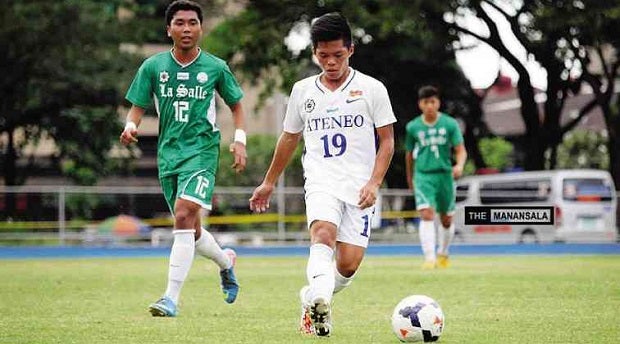 An MVP title holder of the De La Salle-College of St. Benilde swimming team, Miguel starts his day with a hearty breakfast at the crack of dawn at 3:30. He then goes to training from 5 to 7:30 a.m. As a swimmer, he is driven by the thrill of wanting to beat the competition. He knows he can achieve this through hard work and perseverance. His main goal is to keep putting his school on top. “A gold isn’t an overnight prize, every medal is a reward for the amount of work you put into your training everyday,” Miguel says.

A football player from National University, Paolo has been on the game since age 6. Through the years, he has learned to be patient, persistent and disciplined as an athlete and as a student. Paolo eventually played with the Philippine Under-19 national team in 2010 in Myanmar, and was awarded the best striker title in the Philippine Football Federation National Championship in San Carlos, Negros Occidental. He plans to represent the country in future tournaments. He also teaches kids in his home province of Pampanga during his free time.

Paolo Bugas treats football not as a serious and intense sport, but as an opportunity to have fun in an open field while applying his athletic skills. That, he says, is the best thing he has learned from his coach, Chul-Su Kim. The whole varsity team takes the service bus that leaves for FEU-Diliman at 5 a.m. Which means Paolo is up and about at 4:30 a.m.

Physical training is demanding, but for Paolo, football is also a mind game. Physical strength is one thing, and the rest is about using the brain to quickly figure out the winning moves. “Without ideas, you can’t win,” he says.

Because of football, he has enjoyed a full scholarship from FEU since high school; he’s now in second year college.

In the future, Paolo wants to be a professional football player and join any league in Spain.

Being a bronze medalist for swimming in the Southeast Asian Games in 2011 in Indonesia and a member of Alaska Team TBB in triathlon were no mean feats for Living Heritage student Dhill Anderson Lee. He has to train everyday to keep in tiptop shape. His typical training schedule includes swimming endurance workouts on Mondays, Wednesdays and Fridays; and two sessions, conditioning in the morning and speed workout in the afternoon, for the rest of the week.

Dhill has learned a lot about his sporting fields, competition and life in general. He has realized the importance of having a relationship with God. It has given him the strength to deal with difficult situations.

Through swimming, he has likewise met all kinds of people around the world.

Above all, Dhill will always be partial to the sensation of being in the water. To him, it is the comfort zone that helps him relax and focus.

Dhill’s goal for this year is to break the Philippine record in the 50-meter and 100-meter butterfly, which is less than a second away.

He is also aiming for the 2016 Olympics.

“Football isn’t over after leaving the pitch. The sport encompasses a bigger field, which is life.” This line made an impact on Ateneo de Manila University football player Michael Mabanag, not only because his father shared it with him; it is likewise something that he lives by every day.

Through the years, he has achieved quite a lot in football. He took part in the Clear Dream Match, an all-star game, twice. Winning best midfielder in the first Clear Dream Match was surreal for Michael, not to mention that he got to play alongside Fabio Cannavaro and Denise Wise.

Another feather in his cap was being awarded best midfielder in UAAP season 75. But one of the most memorable moments for him was being reccruited for the Under-22 and Under-23 national team. “There’s nothing sweeter than playing for your country,” Michael says.

Lui, another Ateneo de Manila University football player, says he and his teammates never know when the training session for the day will focus on intense fitness or tactical skills. So, it’s good to always be on his feet and ready to face anything that the coach requires.

With a strong set of skills and a good head on his shoulders, Lui was given the chance to represent the Philippines in the U-16 Asian Youth Games and score a goal against Singapore.

He adds that if he is good enough to play for the best teams in the UFL on his senior year in college, he wouldn’t think twice to grab it.