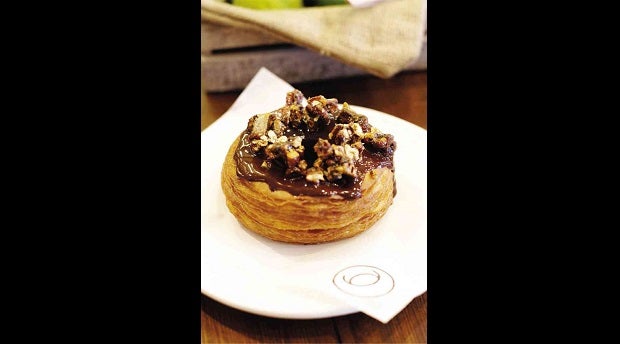 Most of our memories are often inextricably linked with food. We may forget the name of the dish and other pertinent details eventually, but the pleasure and the sensation of happiness always linger.

Tina Lagdameo, whose family quite literally rolls in dough—they created and operate the Gonuts Donuts brand—recalls spending time in Scarsdale, New York. “My family and I used to live there, where we had a lot of memories of eating doughnuts, so we decided to pay homage to the town.”

This led her to approach chef Carlo Miguel to collaborate on a café highlighting the doughnut and its versatility. Chef Carlo is best known for Opus, Draft, Beso, Publiko and Black Olive.

Says Tina: “We’ve been in the doughnut business for 10 years now and we thought of coming up with another brand that used different flavor profiles to create something that was not typical; with our technical know-how and chef Carlo’s creativity, it was a great partnership that helped us create wonderful one-of-a-kind artisanal doughnuts.”

Carlo adds: “What I really wanted to do was to take the regular doughnut and elevate it, so we used more premium ingredients; we also cook everything on-site—that’s something you won’t get at any other store.”

Indeed, Scarsdale’s floor space is huge, picture-window kitchen included; the interiors are bright and airy with high ceilings; there are cozy seats, and electrical outlets abound (an important consideration for the nomadic worker who needs constant caffeinating). The shop is also highly Instagrammable (a factor many people have begun to take into consideration when choosing where to eat/hang out).

True to its desire to celebrate the doughnut, Scarsdale’s menu features it in different states of culinary dress: as your standard fried circlet, dipped in glaze and sprinkled with various toppings; as a croughnut, the wildly popular croissant/doughnut hybrid; and as sandwich bread for savory fillings.

Scarsdale’s doughnuts and fillings are all handmade and cooked on premise in small batches, so there may be a wait to get your croughnut. But chef Carlo promises the short wait for a just-cooked croughnut will be worth it. “They’re uber-fresh; we have them on a schedule where there are fresh croughnuts every two to three hours,” he says. You will rarely see more than three croughnuts on display because they want you to have it fresh.

The croughnut we had, called Carlo’s Favorite—dulce de leche filling with a Belgian chocolate ganache glaze topped with pecan brittle—came straight out of the kitchen. It was cooked perfectly. The croughnut was flaky and chewy; the oil it was cooked in wasn’t discernible at all. That first crunchy, salty-sweet bite will have you renaming the croughnut to “My Favorite.” The Banoffee croughnut has caramelized torched bananas on top, while most of the filled croughnuts and doughnuts have homemade custard made with Tahitian vanilla beans.

Make sure to have room for the savory fare, too. The sandwiches are either served with the unsweetened doughnut or the baked croughnut as the bun. The roast beef sandwich, for example, had generous strips of US Angus beef belly, battered onion rings, veggies and horseradish tucked in between a halved croughnut. We were never fans of horseradish, but this version made us converts. It added just the right amount of kick to complement the tender beef.

The newly opened café’s initial menu is pretty robust; as it is, there are 10 different kinds of sandwiches, 11 croughnut flavors and 17 doughnut flavors. Chef Carlo envisions daily specials and seasonal flavors depending on the ingredient availability, like the organic raspberry-filled doughnut they were currently serving. He was hard at work in the kitchen whipping up a special doughnut for the Chinese New Year with a salted egg yolk filling.

The doughnut’s versatility was a pleasant surprise for the chef. “You can take it into any direction you want. I thought I was going to have a difficult time doing savory stuff because the dough may be too sweet, but the dough is very neutral so it can go sweet or savory very easily. If you can imagine a flavor, you can create it with a doughnut.”

You can really distinguish that the ingredients used were premium. Even the chocolate doughnut, simple and ubiquitous, is a point of pride for team Scarsdale. “We named it ‘Best Chocolate Doughnut In Town,’ because it’s here that you’ll see the quality of what we’re really doing,” explains chef Carlo. “Most chocolate doughnuts use a chocolate compound mixed with a glaze, but what we’ve done is to take a perfectly cooked doughnut and dip it into a 72-percent Belgian chocolate ganache,” he adds.

Though artisanal fare is usually associated with almost exorbitant prices, this is not the case with Scarsdale. “We want to keep the prices reasonable enough that we can bring this quality to a wider market; our chocolate doughnut may have Belgian chocolate, but it’s still only P55,” says Carlo.

Currently, Scarsdale, which is located in the new S&R compound along Shaw Boulevard, follows S&R’s shopping hours (9 a.m.-9 p.m.). But it plans to extend its closing hours soon. A good thing, because Scarsdale also serves cocktails developed especially for the store. We were able to try two interesting concoctions: the fiery Jalapeño Mojito and the Spiked Coffeetini. The Jalapeño Mojito was an interesting mix of calamansi liqueur, rum and jalapeño; the bite of the jalapeño added a double kick to the liqueur’s potency, while the Spiked Coffeetini—-Grand Marnier, Patron “XO Café” and vodka—-was smooth and sweet.

Make sure to bring friends and family on your first Scarsdale field trip so you can order different flavors and sample them all.