A mix of citizens experiences the Palace | Lifestyle.INQ ❮ ❯ 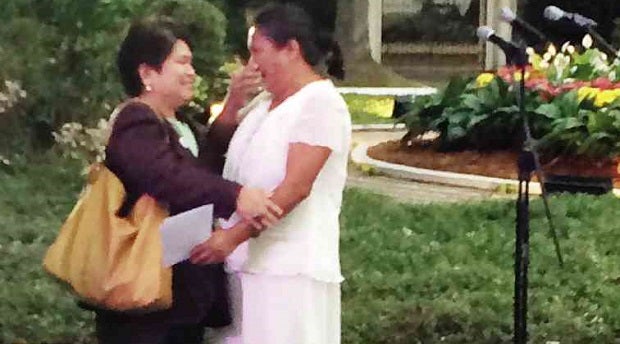 A mix of citizens experiences the Palace

It was a refreshing change from the Malacañan of old to see a mix of ordinary citizens gather and linger on the Palace grounds. This was such a contrast from the pomp and power glitz stereotypical of Palace gatherings of previous eras.

People of various faiths—from priests, nuns, monks and pastors to students, government officials, politicians, business and industry leaders—attended “One Nation in Prayer” last Monday on the Palace grounds. Leaders of various religions joined President Aquino onstage to lead the country in a prayer of thanksgiving, a plea for help and forgiveness, and a vow of national unity.

The 5 p.m. event was broadcast nationwide, but we’re not sure if TV, radio and social media were able to capture fully the emotion of the moment, which was palpable at Malacañan, especially when survivors of several recent disasters broke down in tears as “Ang Aking Dasal” (“The Prayer” in Filipino) was sung.

The prayer of Luis Antonio Cardinal Tagle was very powerful as he invoked the line, “Why has Thou forsaken us?”

The ambiance was low-key, if not solemn, as early as when guests started walking in to take their seats in the garden. There was no sun, only clouds. But the rain didn’t come.

In the crowd, we spotted Fr. Catalino Arevalo, the Jesuit spiritual counselor of the late President Cory Aquino. After the rites, we noted how the President sought out a nun and greeted her—Sister Remy, who, we learned, had supported the Aquino family as early as the Martial Law years.

We saw how the esteemed business leader, Washington Sycip, walked up—in his 90s, yes, he can still walk without help—to Mr. Aquino to greet him.

One of the rare head-turning moments was when the President’s sister, show-biz icon Kris Aquino, arrived with her sons Joshua and Bimby. It was obvious that other than that, people weren’t there to people-watch. Kris was in a simple lace off-the-rack shift, with only a pearl choker as accent.

One interesting trivia—the woman who sang a stirring Filipino version of “The Prayer,” whose beautiful voice touched the crowd, was Michelle Saquido. She is with the Palace staff.

After the Prayer, the people stayed for a merienda of arroz caldo, empanada and fresh lumpia—a simple repast but served tastefully from nipa stands set up on the Palace grounds that reminded you of the church plaza during Simbang Gabi on cold December mornings.

When the bachelor President assumed office, people wondered who would provide the necessary feminine touch for state functions and other Palace occasions since he has no First Lady. Obviously, Social Secretary Susan Reyes has been doing a good job of arranging Palace functions—tasteful yet simple, low-key and sedate, in keeping with Mr. Aquino’s style, from the décor to the menu.

And always, we’ve noticed how the Palace staff uses native materials, from sampaguita arrangements to these thatched nipa stands, in a contemporary way.

As night fell, a warm glow enveloped the Palace garden, punctuated only by the strings of tivoli lights hanging from the ancient trees. The sight of young students in uniform lingering around and enjoying their merienda was heartwarming and reassuring. You hoped that it augured the Palace of Tomorrow. Thelma Sioson San Juan