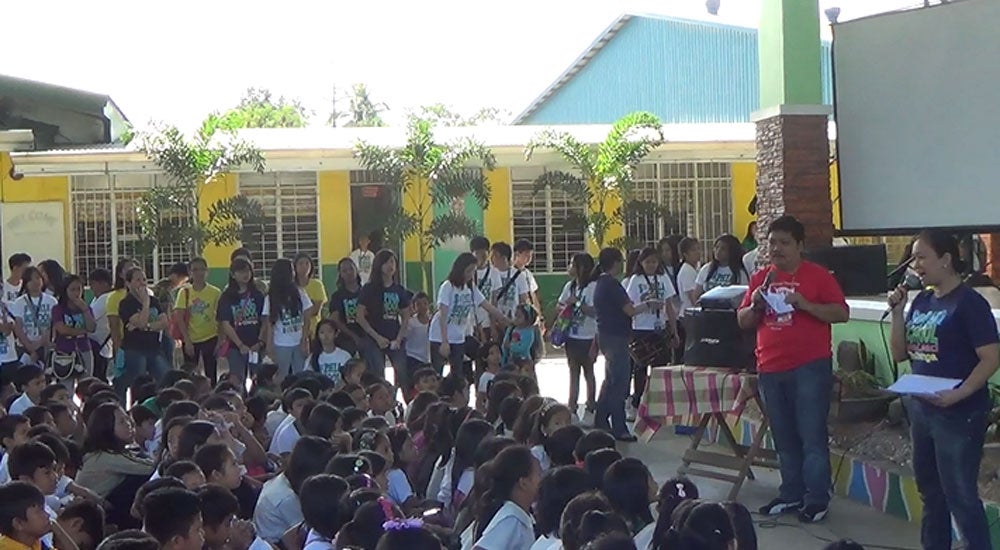 MANILA, Philippines—Sophia School high school senior Alexis Papa scanned the class list, and made sure that the pupils were properly lined up before they headed to the school’s covered quadrangle.

Queueing under the heat of the sun, the pupils were excited to take part another Inquirer Read-Along session at Calvario Elementary School in Meycauayan, Bulacan last Friday morning.

Since 2009, Sophia School has been marking its anniversary with an outreach read-along program. The annual activity has reached more than a thousand underprivileged kids from Meycauayan and Marilao.

For senior students like Papa, Friday’s session was their fourth time to participate in the outreach program. The read-along was also the culminating activity of Sophia School’s week-long celebration of the feast of its patron, the Child Jesus (Sto. Niño).

“We’ve been planning this activity since June. We grouped ourselves and assigned tasks to everyone, so everything would be organized,” said Papa, who is also student council president.

Aside from the storytelling segments, members of Sophia School’s Angklung Ensemble and Terpsichoreans dance group presented special numbers during the program.

De los Reyes, who appears regularly on GMA-7 shows and will appear in an upcoming movie “Basement,” said she was overwhelmed by the kids’ warm welcome.

“I really like doing events in schools. It reminds me of my own days as a student,” she said. “I’m just happy I was able to read to such active children.”

“Whenever I participate in activities like this, I also learn something myself,” she added. “Today’s story reminded me about the importance of trusting yourself. I hope the kids were inspired by Gaya and her story.”

“This is a great project and we are thankful that our school has been chosen again [as a venue],” said Jerry Camacho, principal of Calvario Elementary.

For Grade 5 pupil Jovien, 10, Sophia School’s retelling of “Si Pagong at Si Matsing” was her favorite. “The story taught us that friends should not fight each other,” she said.

“We must have confidence in ourselves because our talent is God’s blessing,” she said.

For 11-year-old Elijah, the highlight of the event was the reader herself. “I’m really very happy I was able to see my idol Ate Louise reading in person,” he said. “I learned a lot.”

His classmate, Mikaella, 11, was likewise impressed by Ate Louise. “I liked her storytelling segment the most because she used voices,” she said. “I also liked the other story, ‘Si Pagong at si Matsing,’ because it teaches the value of sharing your blessings,” she added.

“I learned the importance of being content with what I have, and that everybody has his or her own talents. I don’t have to be envious of other people,” 12-year-old Prinze said.

Melissa Toribio, one of the Grade 4 class advisers, said the Read-Along session helped promote reading among her pupils. “Encouraging students to read would not only enhance their vocabulary but it would also help them learn values that would guide them as they grow older,” she said.

Friday’s session, hosted by Inquirer Libre editor in chief Chito de la Vega, was held in cooperation with Ann Abacan and Sophia School, Innah Montes and GMA Network, Metrobank Meycauayan-Malhakan branch and Flamebridge Publications. The next Read-Along session will be held on Feb. 8 at the Inquirer main office in Makati. With reports from Kate Pedroso, Inquirer Research and Roxanne Abad and Jackieh Cobrador, Inquirer Library