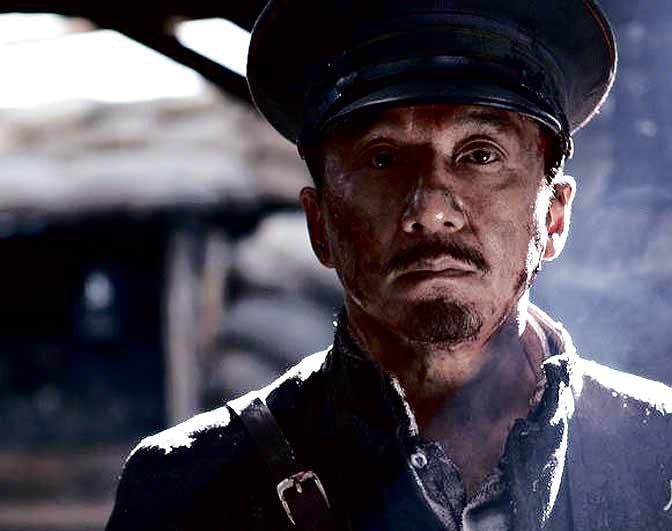 The historical theme, imposing title, big Asian celebrities, and the drum roll that accompanied Jackie Chan’s 100th-film promotions all contrived to make an epic out of “1911 Revolution,” but what eventually appeared on the big screen didn’t quite fit the scale.

Chronicling the revolt against the Qing Dynasty, which fell into decline in the aftermath of the Opium Wars, the two-hour-long “1911” is laden with battle sequences, imperialist politics, and the tragic appendages of war and revolution.

This tumultuous period in Chinese history could richly supply a miniseries, or a set of movies with duality of perspective akin to Clint Eastwood’s “Letters from Iwo Jima” and “Flags of Our Fathers.”

In the hands of Chan, who co-directs with Li Zhang, award-winning cinematographer of period films such as the 2006 action-adventure-drama “The Banquet,” the heft of material becomes a burden.

A hundred and 20 minutes is reasonable for a feature-length film, but “1911” feels like it drags on for hours, with plenty of cringe-inducing scenes.

There’s Sun Yat-sen (Winston Chao) delivering a monologue in English while exaggeratedly cutting up a dish which he then serves, one plate after another, to European dignitaries during an outdoor tea party. What could have been a powerful, symbolic moment—openly expressing disdain for foreigners hankering for their share of Chinese territory—is ruined by the Caucasian actors’ phony reactions.

Another example: Chan, who portrays revolutionary leader Huang Xing, insisting on a pseudo-martial-arts encounter as he slides down a pole on a ship and proceeds to intercept Sun Yat-sen’s would-be assassins with balletic kicks and arm slashes.

Taking on producing, directing and acting credits certainly exposes Chan to criticism. However, let us take into account that the movie was helmed by a wealthy Asian superstar and businessman who, at that point in his career (the film was released in 2011), could afford to quit show biz and reminisce on his glorious contribution to world cinema.

Chan, who has humanized martial arts and endeared himself to fans with onscreen fallibility, cannot always be the consummate comedian-stuntman. With “1911,” he has opted to stretch his acting chops and, because he has more than enough clout and funds, undertake a noble cinematic endeavor which commemorates a significant point in Chinese history.

Perhaps Chan should have pursued something along the lines of “Ocean Paradise” (2010), which stars another martial-arts veteran, Jet Li, who gives an impressive performance as a terminally ill but devoted father to an autistic son.

No matter its tedious aspects, “1911” gives a healthy perspective of Chinese filmmakers—a reeducation for us whose awareness of China’s past has been mostly influenced by Western cinema.

In Bernardo Bertolucci’s “The Last Emperor” (1987), for example, the Tongmenghui, the revolutionary alliance led by Sun Yat-sen, is depicted as a bunch of nationalist fanatics who march the streets in uniforms and stern expressions. They seem heartless, carrying out tasks in soldier-like fashion, as they pressure the last leader of the Qing Dynasty to abdicate.

“1911 Revolution” provides the counterpoint. The revolutionary “drones” are given faces. They have backstories, lives, passions, fears, hopes, and offer a great many sacrifices for love of country.

“1911 Revolution” is among the films featured in the 8th Spring Film Festival at Shangri-La Plaza, running until Feb. 2.