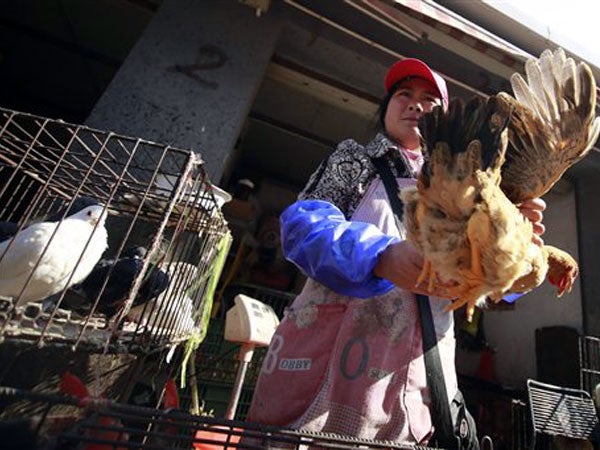 HONG KONG — A cull of 20,000 chickens was under way in Hong Kong Tuesday after the deadly H7N9 bird flu virus was found in poultry imported from mainland China, days before Lunar New Year.

Fears over avian flu have grown following the deaths of two men from the H7N9 strain in Hong Kong since December. Both had recently returned from mainland China.

The number of human cases in China this month is 102 with 22 deaths, according to an AFP tally, and the worst-hit province of Zhejiang has closed live poultry markets in major cities there.

Vendors are unable to buy live chickens and farmers have nowhere to send their stock, leaving traders and shoppers disappointed in the holiday period.

“I wanted to buy one for my mother for the festival,” one shopper in the city’s bustling Wan Chai Road food market told AFP.

“But now there is none, I will have to buy something else. Live chickens just taste better than frozen chickens. The texture is different,” said the woman, who gave her name as Monica.

At a nearby live chicken stall the normally full cages were empty.

“Of course there is inconvenience because we still need to pay the rent and we want to get paid. The sales volume will be affected”, a 59-year-old trader who gave his surname as Law told AFP.

The mass cull started at 10:00 am and was set to last for 10 hours, the agriculture department spokesman said.

Chickens would be given a “chemical treatment” to kill them, after which they would be sent to a landfill, he added.

Local chicken farmers and wholesalers questioned why chicken imports suspected to contain viruses had not been stopped at border checkpoints, but a government spokesman told AFP that there was nowhere to keep them.

“The government should be held fully responsible. It should have stopped the chickens at the border until they were confirmed to be clear of bird flu,” wholesaler Cheng Chin-keung told the South China Morning Post Tuesday.

“Now the chickens from China get mixed with local chickens in the wholesale market and all of them have to be culled.”

But Leung called into question the tradition of buying live chickens for fresher meat.

“In the long run, should we keep the customs of eating live chickens? Hong Kong people should look into this issue,” he told reporters.

The H7N9 outbreak began in China in February 2013 and reignited fears that the virus could mutate to become easily transmissible between humans, potentially triggering a pandemic.

Hong Kong is particularly alert to the spread of viruses after an outbreak of Severe Acute Respiratory Syndrome swept through the city in 2003, killing 299 people and infecting around 1,800.

The city culled 17,000 chickens in December 2011 and suspended live poultry imports for 21 days after three birds tested positive for the deadly H5N1 strain of bird flu.