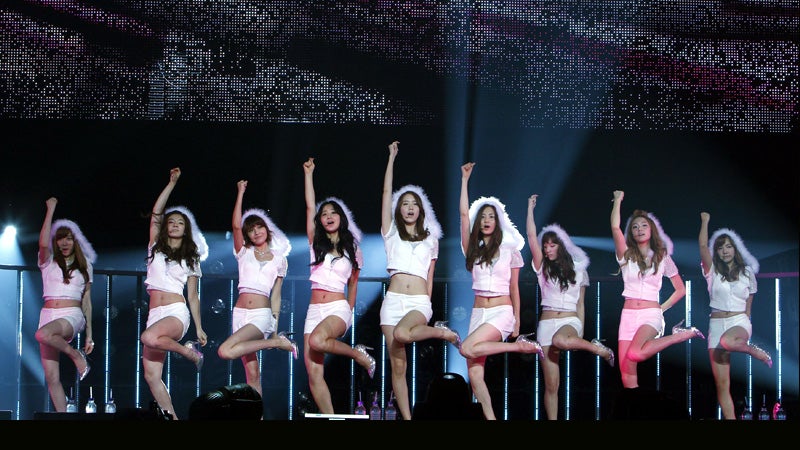 K-POP In this Aug. 25, 2010, file photo, South Korean pop group Girls' Generation perform during their premium live concert in Tokyo. Just as it has elsewhere in Asia, South Korean popular culture, from music and TV dramas to fashion and cosmetics, is captivating many in the Philippines, once an undisputed bastion of American pop and Hollywood movies. AP Photo/Shizuo Kambayashi

Even here in the Philippines, once an undisputed bastion of American pop and Hollywood movies, South Korean pop music, soap operas and fashion are now all the rage.

“I want the same brown, but slightly blonde color, as Sandara’s hair,” says 22-year-old hotel worker Kins Wu, referring to girl band singer Sandara Park as she sifts through color samples at a Manila branch of a Korean hair salon.

The phenomenon, known as “Hallyu” in Korean, took off around the start of the millennium with TV soap operas that became huge hits with Asians of all ages. Then came K-pop music, with its flashy choreographed dance moves, now imitated by teenagers from Beijing to Bangkok.

South Korean President Lee Myung-bak ranks the overseas success of “K-pop” among his country’s top achievements, and the government operates a “Korean Wave” index to gauge the fever for its cultural exports.

Taiwan took the top spot in 2010, nudging out Japan. China, Thailand and Vietnam are also on the list, and the state-funded Korea Foundation for International Culture Exchange says Malaysia will be added this year and the Philippines, as early as 2012.

“The Republic of Korea is making young people all around the world wild with K-pop,” Lee said in an August 15 speech marking Korea’s liberation from Japan’s 1910-1945 colonial rule.

The success is not by accident. South Korea has developed an entire industry to take attractive actors and singers and turn them into larger-than-life stars, carefully managing their look and every move. The polished productions caught on elsewhere, and a few bands such as TVXQ and 2PM are now being created with overseas markets partly in mind.

The music is modeled on American and European pop, said University of the Philippines professor George Fabros, who taught in South Korea in the 1990s, but with crisper performances and flashy hair colors and fashion that appeals to Asian youth.

“They train for years before their debut, and for every album they have different concepts so you won’t get bored with them,” said Daren Lazaro, a 20-year-old management student in Manila.

For some, it is also easy to identify with stars and story lines from another Asian culture.

The downside may be a stifling of individual creativity, but the TV ratings, DVD sales and screaming fans at K-pop concerts show it’s a formula that works.

Almost all the leading drama channels in Taiwan show at least two South Korean soap operas a day at peak evening hours, and music video programs carry the latest on the K-pop scene. For TV stations, it’s cheaper to buy the Korean hits than develop their own programs — that have no guarantee of success.

“Korean entertainers have a superior body language for comic effects, while they also avoid crude language, unlike Taiwanese programs,” said Vivi Ko, a 30-year-old government worker who is studying Korean.

In the Philippines, the themes in South Korean TV dramas of love for family, enduring romance and destiny are familiar ones.

Networks make it easier to identify with the programs by dubbing them in Tagalog and giving the characters Filipino names. When Kwon Sang-woo visited Manila some years ago, fans called him “Cholo” — his Tagalog name in the popular drama “Stairway to Heaven.”

But there’s also an element of the exotic — the settings in South Korea, whether brightly lit bridges along the Han River or cherry blossoms fluttering to the ground — that seems to appeal to many Filipinos’ wanderlust. The writers for Sparkling, a glossy magazine devoted to K-pop, flew to Seoul earlier this year to map out an itinerary of “Hallyu hotspots” for Filipino tourists.

The craze has spilled over into other areas. Thai teens trying to achieve the Korean look snap up cosmetics from South Korea. Also popular are contact lenses that make one’s eyes look bigger, like the cute characters in Japanese and Korean comics.

Yoo Kyung-yeon, a Korean hairstylist working in Manila, said that clients recently started requesting a hairstyle similar to actress Ha Ji-won’s after her drama “Secret Garden” aired in the Philippines. Men want a haircut like that of actor Lee Min-ho, who rose to fame in the hit series “Boys over Flowers.”

Christine Rodriguez, a 24-year-old social media analyst in Manila, gets together with friends once or twice a month for “noraebang,” as karaoke is called in Korean.

That they don’t speak the language doesn’t stop them from singing in it and mimicking the dance moves of boy band TVXQ. They often end the night at the Korean restaurant next door, where they snack on “gimbap” rice rolls and “ddeokbokki” rice cakes, popular street foods often seen on South Korean dramas.

Rodriguez belongs to a TVXQ fan club that has 1,000 members and is one of more than 40 clubs that participated in the second annual Philippine K-pop Convention last year. The event drew 5,000 people, and more than 60,000 “like” its Facebook page.

That’s a leap from the 50 or so K-pop fans Rodriguez said she would meet in online chat forums and e-mail groups in 2001.

Miki Acuña, a 21-year-old nursing graduate from Manila, has traveled to Thailand and New York to catch TVXQ concerts. She said she likes the way the singers sound, move, look and dress, and the slick packaging by their promoters.

“The youth today are looking for spunk, the new look,” said Schedar Jocson, a University of the Philippines lecturer who has written a paper on K-pop’s influence in his country.

“They are looking for their own niche or their own identity,” he said, and both the TV shows and pop music give them something more expressive and experimental than homegrown alternatives.—Associated Press writers Sam Kim in Seoul, South Korea; Debby Wu in Taipei, Taiwan; Thanyarat Doksone in Bangkok and Eileen Ng in Kuala Lumpur, Malaysia, contributed to this report.