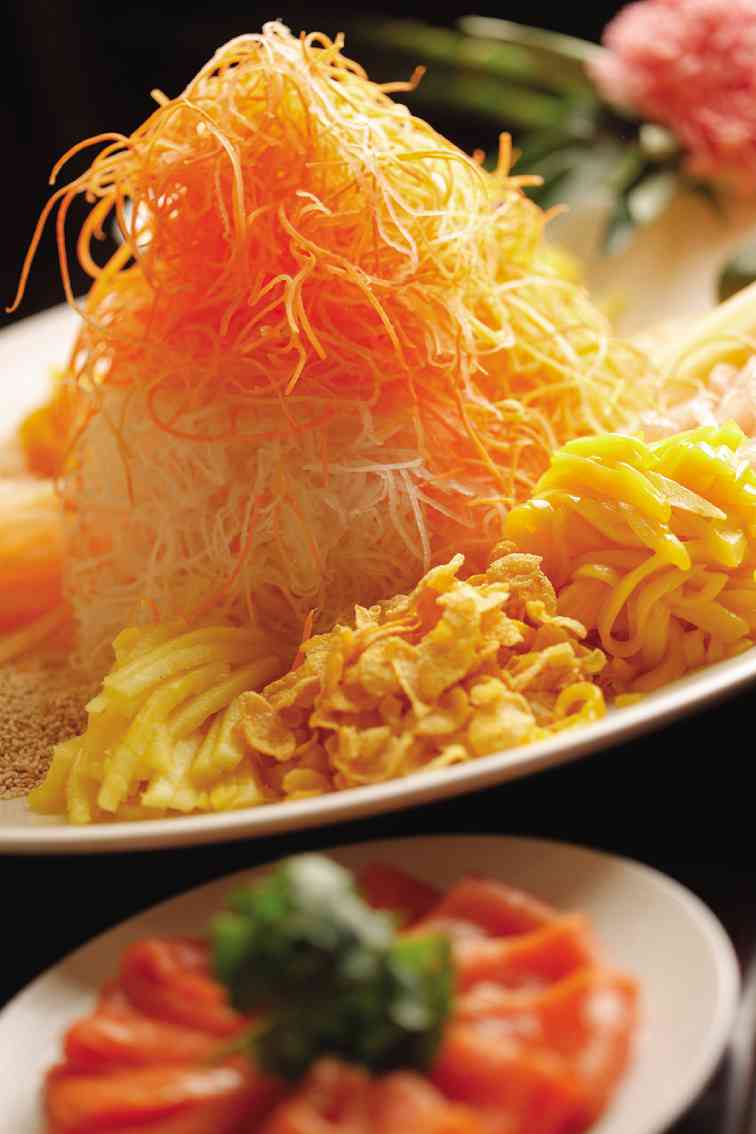 One Chinese New Year, we tossed a mix of vegetables and other ingredients, a ritual known as Yee Sang, and were asked to say our wishes out loud. Most of us wished for the ouster of a president. A few days after, the wish was granted.

Yee Sang is a Singaporean ritual in which raw fish, usually salmon, is mixed with about 19 ingredients—shredded vegetables and the sauces that make for the flavors, each one symbolizing positive luck in this life such as wealth and youth. All participants are supposed to toss as high as they can to assure that the wish is granted.

Our group this year tossed the salad too high that much of it landed on the tablecloth. The Yee Sang was held at Shang Palace in Makati Shangri-La, conducted by executive chef Richard Thong who said there was still a lot more in the kitchen for us to taste.

In this Year of the Wooden Horse, we wished our feng shui will be better than the past years. The delicious salad was followed by New Year dishes that denoted luck and riches in their shapes, or because the Chinese names sound like gold or happiness.

There was steamed fish, braised duck, and broccoli with moss—a kind of seaweed used as vegetable in Chinese cooking and is called “fat choy,” which is part of the greeting extended to family and friends (kung hei fat choy!).

Those are just some of the Cantonese delicacies to be served at Shang Palace for the eve of the new year, as well as for lunch and dinner on the first day of the Chinese calendar. As usual there will be tikoy, the  sticky cake, and tarts made of red bean or pineapple.

Guests were welcomed by Ambassador Asif Ahmad, who announced “This is Great Britain” promotions that will also include a fashion show, an education and trade mission, and cultural shows.

There will be more food festivals.

At InterCon, there will be “pub grub” at the Gambrinus Bar.

Mandarin Oriental Manila will have an Indian curry buffet at Paseo Uno from Feb. 3 to 9.

High Tea, of course, is a British tradition and that happens at the Edsa Shangri-La Lobby Lounge, and a festival is scheduled at the Heat by the hotel’s British executive chef Warren Brown from Feb. 13 to 17.

A long time ago, some British food had funny names such as “toad in the hole” or sausage and Yorkshire pudding, “singing hinnies” for currant cakes, and the one that makes my hair stand just imagining it, “devil on horseback,” which is prunes or dates wrapped in bacon.

Much of what we know about British food today comes from English chef celebrities such as Gordon Ramsay, whose multi-star resto is in London; Rick Stein, whose Seafood Restaurant is in Cornwall; and Heston Blumenthal, whose highly rated Fat Duck is in Bray.

Blumenthal is my favorite because he can teach both complicated “kitchen chemistry” and basic “how to do a proper poached egg.”

Australia Day also happens in January and its food festival has been held at Peninsula Manila almost annually. “Tasting Australia” debuted for food writers at the Pen’s kitchen that services the function rooms.

Yet even if the promotion has ended last week, Australian-born executive chef Richard Green will undoubtedly be doing some of the offerings throughout the year. Green was voted in 2012 as “Chef of the Year” in the Middle East.

It was dessert food that started the tasting—a Tim Tam parfait. This is apparently the favored cookie brand in Australia but was recreated at the Pen’s pastry kitchen.

Because my son insisted on my buying it after watching Heston Blumenthal eat it in the TV show “MasterChef Australia,” I had a clue as to how it tasted like. Good copy! But it made me too full to sample everything we were offered.

“Tasting Australia” has always provided the opportunity to be reacquainted with some of that country’s unusual ingredients.

Gulf bugs or slipper lobsters were cooked as tempura and the sauce was a lemon myrtle (flowering plant used for flavoring) with chili. Quandong fruit that grows only in Australia was made into a chutney used as a sauce for the barramundi and vegetable spring rolls.

And there was the bush tomato once more, an Aborigine food cooked with red wine and herbs to go with the Australian grain-fed beef tenderloin.

And, just to remind us that the spotlight is on Australia, there was a bracing crocodile consommé and wines and cheeses that are among its best products.