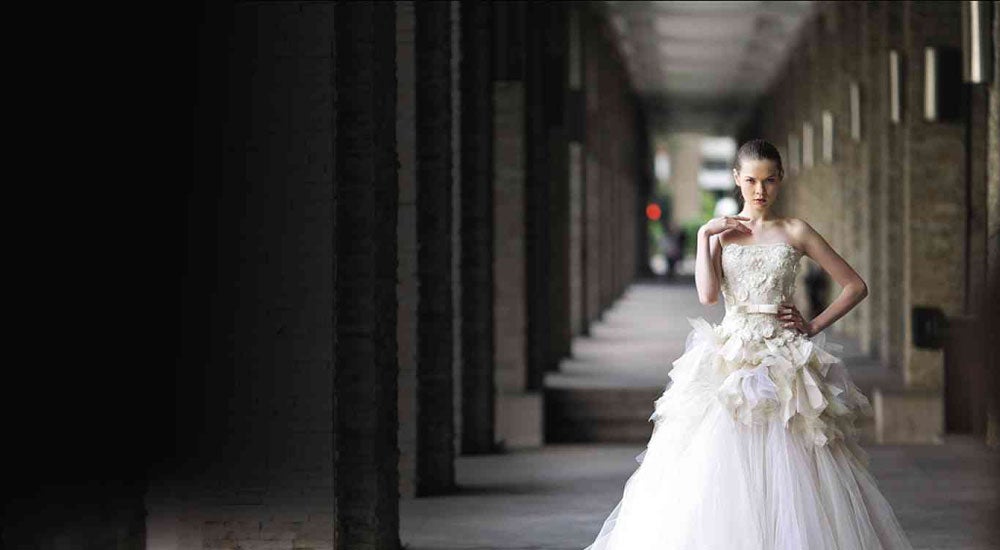 KAOLIN dress from the 2014 Zuhair Murad for Rosa Clara collection.

Dress up for your wedding day like Beyoncé, Jennifer Lopez or Blake Lively

Filipino brides this year get to experience true red-carpet glamour, as wedding dresses made by a designer known for dressing up the likes of Beyoncé, Jennifer Lopez, Taylor Swift and Blake Lively, become available in Manila.

Spanish bridal fashion house Rosa Clara presents its 2014 collaboration with Zuhair Murad, an eight-piece collection that beautifully marries Rosa Clara’s classic and timeless appeal and the Lebanese couturier’s high-glam aesthetics that have made him a favorite of Hollywood’s A-list. Most recently, Murad dressed Kate Beckinsale in the 2014 Golden Globes.

This is the fourth Rosa Clara designer collaboration. The Barcelona-based designer has worked with Karl Lagerfeld, Christian Lacroix and Jesus del Pozo.

The Zuhair Murad for Rosa Clara collection was presented last week in a trunk show, with the house’s 2014 collections, at the Greenbelt Residences boutique in Makati, Rosa Clara’s first and only outpost in Asia (The Residences at Greenbelt Tower III, Retail #2, Esperanza Street corner Greenbelt Drive, Ayala Center).

Brides can view and fit the Zuhair Murad dresses only until this week, before they’re brought to Paris, but they will be available to order throughout 2014. (Call 2381310.)

Also on show was designer Rosa Clara’s own dress of her own design from her wedding last year, a simple and elegant, long-sleeved number with minimal beadwork on the waist and cuffs.

Filipino businesswoman Valerie Villar-Zayco, who brought Rosa Clara to the Philippines in late 2011, has had her entrepreneurial instincts proven right. Ready-made wedding gowns were a fairly new concept when Villar-Zayco, then a recent bride herself, introduced the brand here. Now, there are two or three other shops offering the same.

She now caters to brides even in Singapore, where she is based, and as far as Australia.

Villar-Zayco was right: There are now many Filipino brides who are willing to break away from the traditional custom-made wedding dress. Rosa Clara has endless racks and catalogs of ready-made dresses that brides can choose from. Some opt to buy the samples, tweaked to their size, while others order and wait for four to six months for delivery.

The concept of having a ready-made sample is appealing to women who aren’t sure of what silhouette works for them; these are typically women who don’t go to designers for custom dresses on a regular basis. As Rosa Clara’s fashion consultants might say, what a woman thinks works for her may be different from what really does, and she won’t know until she puts on the dress.

This is a luxury that’s not afforded a bride when one goes to a designer who starts with a sketch; she won’t see the real deal until (sometimes) it’s too late.

“When I see the local designers, they joke that I’m taking away from them,” said Villar-Zayco. “But honestly, I don’t think so. There’s just too many [brides]. Sometimes their choice designer can no longer take them in, so they come to us. The Rajos and the Innos,” she added, referring to top designers Rajo Laurel and Inno Sotto, “we’re not taking business from them because it’s a completely different market.”

Rosa Clara in the Philippines has adjusted its services to cater to local demands, including, say, adding beadwork as the bride or her mother might want.

“We’ve learned to be more flexible,” its managing partner said. “There are brides who aren’t comfortable with a strapless dress. We help her be as comfortable as possible.”

Like designers, they also dress up the bride on her wedding day. All alterations are done in-house.

Villar-Zayco said they now also cater to a new market segment: the “rush brides.” She told the story of a harried bride who came to the shop at 8 p.m., an hour before closing. Her wedding was the next morning and the dress she had made with a popular young designer didn’t work out. She chose off-the-rack and the Rosa Clara staff did the necessary adjustments overnight, and delivered the dress to her hotel in time for the wedding.

The shop has seven collections, including formal and cocktail wear for the entourage, or for other dressy occasions. It also has lace and beaded toppers, boleros and cover-ups for churches with strict dress codes.

Villar-Zayco has one advice for brides: “Don’t rush in choosing that dress. Try seven, even 10 gowns. It’s free. When you find something you like, sleep on it.”