A joyous encounter with the Holy Infant of Prague | Inquirer Lifestyle ❮ ❯ 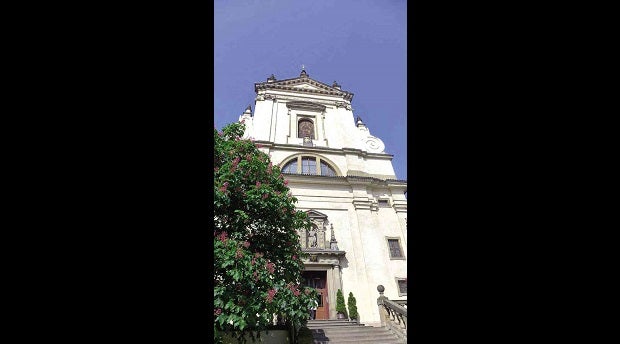 CHURCH of Virgin Mary the Victorious

A joyous encounter with the Holy Infant of Prague

I was introduced to the devotion to the Holy Child by an aunt. The Santo Niño devotion has been instrumental in strengthening my faith as parent to two children, EJ and Ziggy.

Every year, right after my kids were born up to their young adulthood, I would lug them to Mass during the Tondo feast.

It was no mean feat to herd two frisky toddlers and not lose them in the multitude during this annual panata. It was also a different challenge to restrain them from running after the multicolor chicks and eating the kakanin being sold at the church grounds.

It was a daring deed to elbow one’s way through the throng, pray fervently right in front of the revered image with two kids and not fall prey to pickpockets.

Still, every year, we joined the crowds from all walks of life converging in that church as we showed our faith in the Holy Child.

I couldn’t explain it, but after each Santo Niño feast day visit, I felt renewed vigor in facing the challenges of life as a solo parent.

Last year, in an unexpected yet providential turn of events, I fulfilled every Santo Niño devotee’s dream. I found myself in the Czech Republic with pilgrims from Journeys of Faith led by Fr. Bong Tupino and Fr. Jess Pasquin, praying in front of the iconic 47-cm sculptured image of the Holy Infant of Prague.

It was in that early Baroque Church of the Virgin Mary the Victorious in Maia Strana (the Little Quarter), where I learned of the journey of the devotion from Prague to the Philippines. As I moved from altar to altar, I was fascinated by every amazing art masterpiece within the church that bespeaks of one’s faith journey.

The early Baroque façade caught my attention upon entering the church. I took special notice of the motif of a star, the sign of the church’s dedication to the Virgin Mary (Stella Maris). The star is also a sign of the Order of the Barefooted Carmelites. The 47-cm-high wax figure sculpture of the Holy Infant of Prague perched on a 2-cm base was presented to the Carmelites in 1628. It was called the Gracious Holy Infant (Gratiosus Iesulus). In the Czech kingdom, the figure of the Holy Infant in the care of the Carmelites was to become a symbol of a new beginning, a medium of a new devotion.

A short distance from St. Therese’s masterpiece stood the altar of St. John of the Cross—likewise set in black and gold. The mensa bears the picture of the Virgin Mary of Mantua in a golden base, clipped by an opulent silver border. St. John of the Cross and St. Therese of Lisieux were believed to be instrumental in the propagation of the devotion to the Holy Infant.

The church was undergoing construction then and the precious image was at one of the side altars. Finally, I was face to face with the church’s most valuable treasure—the Holy Infant of Prague made in 1776 by Frantisek Lauermann. Looking up, I noticed the sculpture of God the Father. There was also the sculpture of St. Joseph and the Virgin Mary. The Prague Holy Infant was housed in a case with 20 little angel sculptures. It stood on an exquisite pedestal decorated with crystals, and precious stones and a large ruby formed like a heart.

According to the priest in the sacristy, there are many stories of the sculpture’s origin. Some believe it came from a monastery that was situated between Cordoba and Seville, and it is a copy of the wooden sculpture venerated in that place. Locals say the sculpture was obtained by Doña Isabella Manrique de Lara y Mendoza and she gave it as a wedding gift to her daughter, Maria, who married one of the nobles of the Czech kingdom, Vratislav of Perstejn.

They all agreed on one thing, though—that many petitions and miracles have been attributed to the Prague Holy Infant. I remembered that the first wedding gift I opened was that of an image of the Holy Infant of Prague. Perhaps that was an indication that my devotion would continue after I had my own children.

I saw several copies of the Novena to the Holy Infant of Prague in a number of languages. I knelt down in solemn prayer. In the next few minutes, I experienced a joyous spiritual encounter that I will remember for the rest of my life.

The experience fueled my curiosity about the Holy Infant’s image. A lady clerk at the bookstore behind the church told me that the figure of the Holy Infant of Prague has always been dressed. She said that before, the Holy Infant used to wear a gown of white, a white robe and a silk garment similar to a dalmatic over it.

More robes that reminded one of a priest’s garments were layered over the undergarments. A gilt crown adorned the Holy Infant’s head. Today, the Prague Holy Infant reportedly has a vast wardrobe of more than 60 pieces of clothing, some coming from devotees from Asia, including the Philippines and Vietnam.

In the Philippines, you can also see Santo Niño images richly garbed in a variety of clothes of every color.

Through a child’s eyes

The Catholic devotion to Christ’s childhood is a thousand-year-old tradition in Prague. From the Gospel texts, to artists’ depiction of the childhood of Infanta Christi, to the adoration by Holy Fathers and writers, and St. Francis, the small Jesus was greatly respected. Even St. Anthony de Padua is usually depicted with the Holy Infant in his arms.

Pilgrims from all over the world continue to pay homage to the Prague Holy Infant. Pope Benedict XVI granted a Canonical Coronation to the image during his apostolic visit to the Czech Republic in 2009.

In the Philippines, the drums will continue to beat and the throngs of faithful will flock and dance with wild abandon, holding up their Santo Niño images as they pay homage to the Holy Infant. From Prague to the Philippines, the devotion to the Christ Child will remain as unadulterated as simple faith through the eyes of a child.

This year, Journeys of Faith has prepared eight programs for the faithful that will go to Rome for the canonization of two of its most beloved pontiffs, Pope John XXIII and Pope John Paul II. The different itineraries include Marian sites, the Holy Land, Russia, Switzerland, Adriatic States, Medjugorje and Eastern Europe.