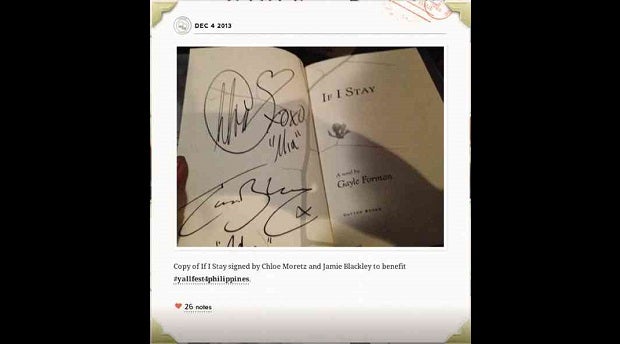 MORETZ, Blackley and Forman signed a copy of “If I Stay” to auction to raise funds for Supertyphoon “Yolanda.”

Author Gayle Forman arrived in Manila with a thousand bookmarks in her suitcase to give away to fans at a signing session in National Book Store—but with a bothersome throat infection.

She woke up before her flight feeling like hell, but there was no way she was canceling.

“I had been wanting to come to the Philippines because I noticed how my Twitter feed would have tweets half in English and half in—I first thought it was Indonesian ’cause I have a pretty big Indonesian fanbase—and then I finally realized it was a mishmash of English and Tagalog,” Gayle explains. “The fan excitement over this trip has been crazy; when I woke up last Tuesday sick and unable to get out of bed, I said ‘I have to get it together.’ I can’t not go. No way.”

Gayle Forman is the author of five great young adult novels. The first, “Sisters In Sanity,” was inspired by an article she had written for Seventeen magazine, about behavioral modification camps; the others deal with young love and finding one’s self. The books are well-written—the type that you have to read with a box of tissues next to you because you are going to do a lot of ugly sobbing.

This is not Gayle’s first visit; in the late 1990s, she came to Manila as part of the Seventeen (US) magazine team. In May last year, she was on her way to Australia and thought about doing a side trip to the Philippines to meet fans. “I was already gone for 10 days though, and my kids and I have a deal that I’m not supposed to be gone more than a week.”

This time she made it back, and with great timing, too. Her second novel, “If I Stay,” has just been adapted for a film starring Chloe Moretz. It is scheduled for release in August.

Gayle says that experience was surreal.

Super sat down with her just before she met fans and hopped on a plane to Cebu to sign more books and have fun at the Sinulog festival.

In this interview she talks about her past life as a journalist, hanging out with Moretz and how she helped raise $10,000 for Supertyphoon “Yolanda.”

Of the books you’ve written, do you have a personal favorite?

I think “Where She Went” is my favorite. Now that I’ve been back in the world of “If I Stay,” it’s probably a dead heat between the two, but I identify with the Adam in that book; there was something really raw about how he feels, it was about a side of grief that I think doesn’t really get talked about a lot. There’s something very cathartic about it, I know Adam can be terrible and I like looking at people who do terrible things out of pain, which is basically the reason any of us do.

You’ve written two books from a guy’s point of view. Was it difficult writing as a guy?

I love writing from a guy’s point of view, which is funny because a lot of female authors who seem to do this very well talk about how they grew up with brothers or how they have sons. My brother was much older than me that he was out of the house by the time I was 10. I have two daughters, and my husband, he’s great but he’s not a “dudely” dude. But when I sat down to write down Adam, I already knew him so well. The only real change I had to make was to go and cut out all the times he’d said “lovely” ’cause guys wouldn’t say that. But then here’s the funny thing, Jamie Blackley, the actor who plays Adam, says “lovely” all the time; it was kismet!

You were hanging out a lot on the set of “If I Stay.” What was it like?

I was on the set for a couple of weeks, my kids came with me. It was humbling more than anything. I think one of the most profound experiences of being on the set was seeing all the trailers, trucks, cables, teamsters—-not the actors. Just all of the infrastructure around a movie getting made, and realizing that that is because they’re making a movie out of a book you’ve written, was so humbling.

Did you cry when you saw your book coming to life?

Oh, god. I cried for the first time when I went to the set where the family lives; and RJ, the director, and I had some back-and-forth e-mails about what it should look like. It’s based on a real place that they kind of recreated—I didn’t give them tons of pictures of the real place, I just gave them visual snapshots and descriptions, and then I walked in and it felt like a place that I had been to 15 years ago. That was just so overwhelming that I walked out and cried and called my husband.

How was Chloe Moretz cast?

Dakota Fanning was the only actress officially attached, but Chloe became attached a full year before her name was ever out there. Chloe is amazing. She’s smart, incredibly talented and strategic and tenacious, and she just waited it out and quietly hung by and the film changed from Summit to MGM… It was funny because early on, when we were thinking who could play Mia because it is such a heavy dramatic role, and this was 2009, and we were first looking to cast, we went, “Too bad Chloe Moretz is too young,” ’cause she was 12 back then. But then enough time went on that she’s now the right age.

Have you seen her movies?

Did she read the book?

Oh, yeah. She read the book, and she sent me an e-mail after she read the book. She really identified with the character and said right away she felt like she had to take cello lessons because cello was such a part of who Mia was.

You mentioned wanting to be an actress when you were a kid. Does that mean you have a cameo in the film?

You were able to raise $10,000 for Supertyphoon Yolanda during YA Book Festival YALLFest! How did that happen?

I was at YALLFest. National Book Store’s Miguel (Ramos) was (also) at YALLFest, and the typhoon was happening then… There’s a lot of Filipinos living in the States that are huge YA readers that came to YALLFest and author Melissa de la Cruz is Filipino, so we decided to take the momentum from YALLFest to try and raise some money. They asked if I would donate books, and I knew I was going to the set of “If I Stay,” and I said let’s get Chloe and Jamie to sign a book, I think that will raise more money. Immediately the bidding went to $700, and I thought, that’s great, maybe it’ll get to $1,000 or something. And then I said I would match the bid amount, and then two hours before the auction ended it was insane! It went up to like $4,800… I think we were all just amazed and I did match it, and it turned out to be a nice chunk of change.

You have two young daughters. When are you going to let them read your books?

My oldest is 9 and she’s very good about self-regulating what she can read and what she’s ready for, so maybe at 12 we can discuss “If I Stay” for her.

Has your eldest expressed interest in reading “If I Stay”?

No, she doesn’t care at all. My little one is very into what I do. Whenever we go to bookstores, she goes up to the counter and says, “My mommy is an author, do you want her to go and sign the books?” It’s very sweet. She’s my publicist.

Do you still have time to read?

I always read. Right now I’ve gone back a couple of classics. I’ve decided to reread “To Kill A Mockingbird” and “Fahrenheit 451.”

What is brain food for you while you’re writing?

Whenever we have the makings for nachos, black beans, cheese, avocado and some salsa with chips, I’m so happy because all I have to do is grate the cheese on top of the chips, put it in the microwave, and hallelujah.

You called your next book a “suicide mystery love story.” What’s it about?

It’s coming out in 2015. It’s called “I Was Here,” about a girl named Cody. It opens a month after her best friend in the world killed herself. No one saw it coming. It’s about Cody dealing with that and her sense of guilt, but also there’s a mystery involved, and theres’ a very hot guy—he’s the hottest guy I’ve ever written—his name is Ben.

Gayle Forman’s books are available at National Book Store or eBooks at the Kobo Store. Visit www.nationalbookstore.com and follow them on Twitter/Instagram: @nbsalert.