From Boublil-Schonberg, ‘a musical show for Filipinos by Filipinos’ | Inquirer Lifestyle 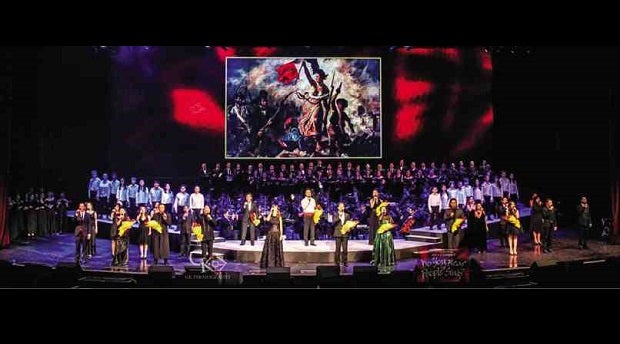 From Boublil-Schonberg, ‘a musical show for Filipinos by Filipinos’

It was not the typical benefit concert where the usual star-studded cast offered their talents for a worthy cause.

First, the response of the audience benefactors was immediate, and the desired goal was accomplished. By the time the performers made their final bow at curtain call, P24 million had been raised to build 200 homes for residents of Tacloban who had been deprived of their shelter (among other things) by Supertyphoon “Yolanda.”

Second, the stellar cast, top-billed by the Olivier-and-Tony-award-winning legend Lea Salonga and Australian musical theater sensation David Harris, shared the distinctive experience of having performed in any one of the international productions of “Les Miserables” and “Miss Saigon,” today among the most popular, longest-running musicals in Broadway and/or the West End.

Finally, the Manila version of the concert billed “Do You Hear the People Sing?” was another chapter in the continuing relationship between the creators of those musicals and the Filipino people. Claude-Michel Schonberg, who was in London when Yolanda hit the Philippines, phoned his long-time writing partner Alain Boublil in New York, suggesting that they stage the concert—which had been enjoying a successful run in Southeast Asia—in Manila as a fundraiser.

Boublil agreed and contacted Salonga, who then started the huge job of organizing two performances.

There were significant differences in the Manila show. Eight more soloists were added to sing what could possibly be the definitive line-up of numbers from the Schonberg-Boublil canon, including the lesser-known shows “Martin Guerre,” “The Pirate Queen” and the French-language “La Revolution Francaise.”

Conductor Gerard Salonga worked with the French creative duo for the first time (although he had known them for decades) to orchestrate the musical, which were premiering new or reinvented songs. Salonga was also ably supported by Pinoy theater and concert stalwarts such as Leo Valdez, Cocoy Laurel, Menchu Lauchengco-Yulo, Jed Madela, Michael Williams, Rachelle Ann Go, Carla Guevara-Laforteza, and Robbie Guevarra, just to name a few.

As Schonberg put it, the powerhouse talent—onstage and behind-the-scenes, all of whom waived their talent fees for the benefit—made this particular version of “Do You Hear the People Sing” a musical show “for Filipinos by Filipinos.”

“We have a special relationship with the Philippines,” he added. “It is a special place for us. I first came to Manila in 1988 when we were doing auditions for the original production of ‘Miss Saigon.’ Since then, I have been here 74 times.”

That first time landed Salonga in the “Miss Saigon” titular role and cast other Filipino musical theater artists in the ensemble. It was the culmination of a long worldwide search by Schonberg, Boublil and producer Cameron Mackintosh that had long since made the annals of theater history. It also opened doors for more Pinoy artists to make successful careers in Broadway and West End musical productions.

“We have a lot to give back,” said Boublil. “Up to today, there is not a cast of ‘Miss Saigon’ that does not have a Filipino in it, or at least one with Filipino lineage, even if they grew up in the US or the UK.”

The connection is even more personal for Schonberg. He adopted a daughter from the Philippines who is now 21 years old and taking up design classes in a French school. Also, the orphanage he put up in Parañaque, named Sun and Moon from one of “Miss Saigon’s” musical number, currently has 200 children in its care, in partnership with the Department of Social Welfare and Development.

“What we do”—he said of the concert and the orphanage, in light of the immense problems of poverty and the effects of disasters in the country—“is but a drop in the bucket, but we do what we can.”

Their experiences offstage have had a hand in the transformation of their musicals. As shown in the Manila version of “Do You Hear the People Sing?”, songs that didn’t make it to musicals were now included in the lineup—such as “Too Much for One Heart” (which Salonga said the creators regretted cutting from “Miss Saigon”), and “I Still Believe,” the Kim-Ellen duet that has undergone revision to paint a more accurate \ portrayal of the protagonists’ situation.

“After 20 years, your point of view changes,” says Boublil. “You learn more, especially what is more relevant to the people in the world. It adds to the songwriting and the creative process.”

The songwriters’ journey continues. “Do You Hear the People Sing?” will open in Taipei by end of March and continue on to other Asian and possibly American cities. But the Filipino connection will remain.

“I love it here,” said Schonberg.