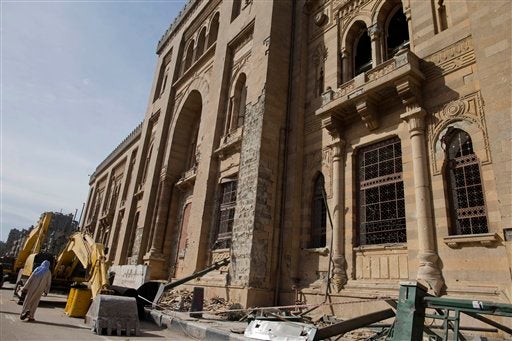 An excavator rests at the Museum of Islamic Art as members of the UNESCO delegation check the damage of the museum in Cairo, Egypt, Friday, Jan. 31, 2014. The U.N. agency visited the museum where centuries-old artifacts were destroyed by a bombing that also ripped through the nearby Cairo police headquarters a week ago. (AP Photo/Hassan Ammar)

CAIRO — UNESCO pledged Friday to help restore a renowned museum dedicated to Islamic history in Cairo that was devastated by a bomb last week, with officials expressing “shock” at the scale of the damage.

The Museum of Islamic Art was across the street from the truck bomb that targeted the Egyptian capital’s security headquarters on Jan. 24. It killed four people and caused damage to buildings for hundreds of meters (yards) around, smashing the museum’s facade and sending debris crashing onto exhibits.

Egypt’s Antiquities Minister Mohammed Ibrahim said that 164 of the 1,471 items on display were damaged, of which 90 could be reassembled or restored. Most of the 74 irreparably damaged items were glass and porcelain, smashed to powder.

On a tour of the building on Friday, shattered glass littered the floor while fragments and steel slabs from the broken windows lay all over.

“It was an outstanding museum and to see it now, inside at least, totally destroyed is a big shock for us,” Christian Manhart, head of UNESCO’s museums sections, said at a news conference.

The U.N. cultural agency had already set aside emergency funds of $100,000 on the same day of the blast and said further technical and financial help would follow after detailed reports were filed. Ibrahim said the American government would provide 1 million Egyptian pounds (about $150,000) while a well-known actor, Mohammed Sobhy, said he was giving 50,000 pounds (around $7,200).

Ibrahim said Egypt’s National Library and Archives in the same building with the museum was also damaged. In addition, the blast smashed windows and caused other damage to historic mosques in the neighborhood.

The 133-old museum host pieces from periods ranging from the seventh-century pre-Islamic era to the end of the 19th century. The collection includes carpets, coins, ceramics, jewelry, manuscripts, marble carvings and woodwork.

The building had recently undergone a $14.4 million renovation before it was hit.

Friday’s visit to the museum was by a joint mission involving UNESCO and two protection and conservation groups, the International Council on Monuments and Sites and the International Committee of the Blue Shield. Manhart said the team will also prepare documents and figures to be presented to potential donors, which he was not authorized to name immediately.

Egypt has witnessed a surge in attacks on security forces after the ouster of Islamist President Mohammed Morsi in July. An al-Qaida-inspired group based in the Sinai Peninsula called Ansar Beit al-Maqdis, or Champions of Jerusalem, claimed responsibility for many of the attacks, including the Jan. 24 bomb.

“How are we supposed to secure all these museums and historical buildings to face bombings? There’s no country, no matter how far it reached in technology, that could stop damage from such terrorist attacks,” Ibrahim said.

Three years of unrest has devastated Egypt’s economy, including the vital tourism industry, and the security vacuum has taken a heavy toll on the country’s monuments.

In one of the worst incidents, looters made away with more than 1,000 artifacts from a museum in the southern city of Malawi as violent clashes roiled the country in August. Ibrahim said Friday that the restoration of the Malawi Museum will be done in six months.

Other museums have also been hit, including the famed Egyptian Museum in Tahrir Square that holds Pharaonic antiquities including the treasures of King Tut. During the 2011 uprising would-be looters damaged mummies and other artifacts before being caught by army soldiers.

Some items stolen from museums or archaeological sites have been recovered.

The ministry said Friday that 935 stolen Pharaonic artifacts were found in a house in Cairo’s twin city of Giza. The pieces included masks, pots, and statues. Security forces said they also confiscated guns and ammunition.