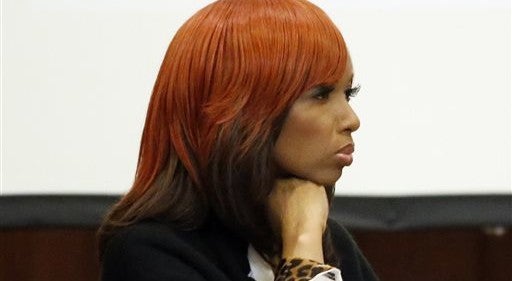 Natasha Stewart, also known as Pebbelz Da Model, looks ahead while her attorneys talk with the prosecutors and the judge over jury instructions during court in Jackson, Miss., Friday, Jan. 31, 2014. She is charged with depraved-heart murder in the death of 37-year-old Karima Gordon, of Atlanta. Stewart allegedly helped arrange the unlicensed buttocks injections that prosecutors say killed Gordon in 2012. The jury begun deliberations Friday. (AP Photo/Rogelio V. Solis)

JACKSON, Mississippi — A U.S. woman has been found guilty of manslaughter for the illicit silicone buttocks injections that prosecutors say killed a woman in 2012.

Natasha Stewart was found guilty Friday in the death of 37-year-old Karima Gordon.

Stewart had faced a murder charge, but the jury was told it could consider the lesser charge of manslaughter.

Authorities say Stewart, an adult entertainer also known as Pebbelz Da Model, took $200 for a referral to the alleged injector and falsely represented that the injector was a nurse.