A Moveable Feast on Top of the World | Inquirer Lifestyle ❮ ❯ 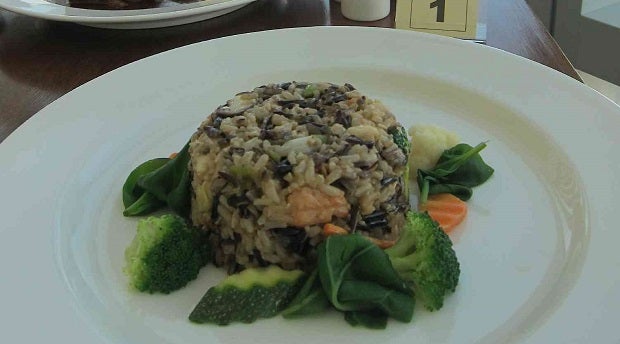 A Moveable Feast on Top of the World

I felt the earth move.

“Are we on a ship?” I joked, fascinated in spite of needing to find my bearings. Then I looked out the glass walls and saw the Metro’s skyline and stars. “Is this the Love Boat?”

We were out for dinner on a lovely evening. I felt like I was on a cruise ship, thanks to the almost negligible but definite floor movement. Except that we were not out at sea but on top of the world—or at least 33 floors above ground level.

Dinner was at 100 on the topmost floor of the MDC building in Eastwood. From this height, you can see the expanse of Metro Manila from Quezon City to Pasig and Ortigas. And over yonder are Taguig and Makati.

In the evening, you see the skyline and if you’re lucky, may spot stars as you peer through the clear glass wall that extends to the very high ceiling. On the other hand, if you come by during the day, Metro Manila’s geography will inevitably be a topic of conversation as you try to figure out after every few meters what city you are now facing. “That’s Laguna de Bay,” my friend, The Magnum, pointed to what looked like a river on a daytime visit. “But this development (pointing closer to Eastwood) has been blamed for the flooding. They elevated the place so there’s no flood (in the developed area) but the water diverts instead to Provident Village in Marikina.”

Flashback to scenes of Cristine Reyes atop her house during Typhoon “Ondoy.” Then as we moved another 45 degrees: “Those are the Sierra Madre mountains.”

The restaurant literally revolves and makes a 360 degrees turn around the building. If you pace your chewing and conversations right, you end up at the point where you started when it’s time for the bill. Some appreciate the revolution, others easily get dizzy. But take the risk at least once for the experience: This is the only existing revolving restaurant in the country today.

For those who have motion sickness, there’s a section that remains stationary. “This section is not revolving, just evolving!” quipped the Silver-Tongued Metrosexual as we moved to the stationary section. “As long as it’s not revolting!” the Queen Chief volleyed back.

Thankfully, there is nothing revolting on the menu; in fact the selections are quite comforting. The master of the kitchen is Chef Jessie Sincioco of Le Soufflé (and now Chef Jessie) fame. But the menu is not French. It is primarily Pinoy comfort food presented in a very modern, cosmopolitan way.

At first look, the menu seems to be all about European-influenced fine dining staples: a salmon pie with a heaping of caviar on top; escargot; steak tartare. But come the salad, Filipino flavors make their entrance.

Chef Jessie uses alugbati (Malabar spinach), a diversion from your usual salad greens. It is slimy, salty, succulent… sensational! Extending the uniqueness of this salad even further, Chef Jessie adds dilis (dried anchovy) and—brace yourself—bagoong (shrimp paste). Bagoong? Yes, even if we are more familiar with this as a condiment for green mangoes or kare-kare. Sounds odd but the chef proves its purpose. Why look for capers when we have so many local ingredients for that minute trace of salty just waiting in the wings? The result is a unique and truly modern Filipino salad.

Continuing the theme of using otherwise unheard of ingredients, the chef uses a real surprise ingredient for soup: balut (duck egg)! Balut (fertilized duck egg) is normally utilized for its shock factor, a welcome treat (or trick) for foreigners. But Chef Jessie’s balut is refined. The soup that you ordinarily suck out of the shell is made into a broth and the balut parts make up the soup’s contents. It is savory, hearty, and not at all shocking. In fact, it is quite sophisticated.

Come the main course, not only the Filipina but the Bulakeña in Chef Jessie comes out: a beef roulade is just like the Bulacan version of morcon, a bangus belly roulade is a prettified version of a breakfast staple of steamed fish with tomatoes and onions sandwiched into its heart; the classic Tagalog adobo is ever present albeit with duck instead of chicken or pork; a salpicao is offered using ostrich (a must try!); and in the long selection of steaks, there is an Angus “bistek” (Filipino beef steak).

The patriotism flows until dessert, when the chef displays her adeptness at pastries. (She broke into the culinary scene in 1983 by winning the grand prize in the baking category of The Great Maya Cookfest). As a homage to the revolving restaurant, she offers “Revolving Tortas.” A torta is a muffin-like Filipino pastry but Chef Jessie adds a personal touch to these by offering them in various flavors: banana, jackfruit, macapuno, mango and pineapple. In each distinct torta, the base stands in quiet strength, confident of its moist perfection. But the chef makes the Filipino fruits take centerstage and shine. Another stellar signature for 100! (My favorite was the macapuno; others liked the jackfruit.)

Mind you, in spite of the devotion to Filipino flavors, there are other dishes for the more worldly. There are varieties of maki, varieties of steak, and varieties of pasta for those who prefer more international entrees. But to me, like Filipinas in an international beauty contest, the Pinay dishes here are the ones that shine. You can forget everything else.

Is it romantic enough for Valentine’s Day? Truth be told, the “evolving” (stationary) area is more conducive to power meetings. But the revolving area of 100 is 100 percent acceptable for a Valentine’s date.

Aside from the 360 degrees view of the Metro Manila skyline, how can you beat the earth moving under your feet while being on top of the world? •