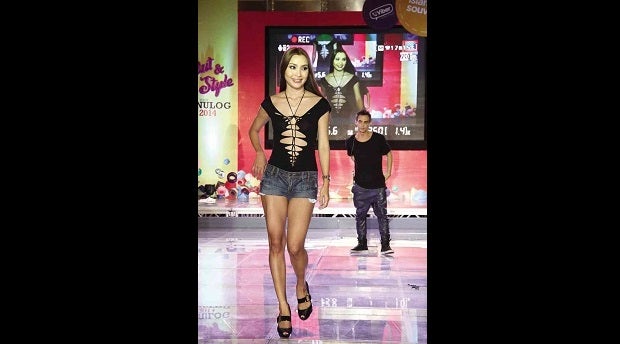 The parties leading up to last year’s Sinulog may have been all about the booze (we were introduced to Johnnie Walker Platinum, and Bibendum Wines opened its doors). But this year, and much to our livers’ relief, it was all about the clothes.

Maybe it’s because we don’t have a Coachella or a Glastonbury, and we’ve all come to realize that Sinulog has become the best excuse to experiment with festival fashion. Sinulog is the one time of the year when no one will bat an eyelash when you chop off your denim shorts even shorter and pile on as many feathers as your head can carry.

The exhibit was courtesy of homegrown apparel brand Islands Souvenirs, which was offering its Cut & Style Your Own Sinulog Shirt promotion for the second year in a row. The special offer allowed customers to embellish and customize their Sinulog shirts in any of the Islands Souvenirs stores, or in the Cut & Style activity area at The Northwing Atrium of SM City Cebu.

The exhibit also served as an inspiration for customers who were looking for ideas on how to cut and style their own shirts to wear come Sinulog day. Granted though, you’d have to be extraordinarily skillful to recreate some of the designs featured—from Shandar accessories designer Mark Tenchavez’s decadently bejeweled creation to abstract artist Sio Montera’s pop-art piece with Sto. Niño silhouettes made out of metal and rubber.

A week later, Islands Souvenirs took Cut & Style to the stage with a fashion show, also at the SM Northwing, featuring fashion bloggers Kryz Uy and Laureen Uy, and local personalities from bright young things to seriously stylish moms and their kids.

There were beauty queens, too, emphasis on “queens” as the lineup included winners of Queen of Cebu, a pageant for alternatives, prompting one of the former winners, Bee Urgello, with curves and cheekbones that are cause for envy, to thank Islands Souvenirs for “including transgenders in such a big fashion show.”

And that wasn’t the only boundary-pushing thing about the show. For the finale, Islands Souvenirs flew from Los Angeles couture shirt and dress cutter Adam Saaks, who captivated the audience with a live performance, manipulating an Islands Souvenirs Sinulog T-shirt into a precariously perched body-con dress and a gravity-defying swimsuit.

A couple of days after the fashion show, on Sinulog day itself, we took to the streets, and it was hard to miss both Saaks’ and Islands Souvenirs’ presence in the cut, slashed and styled T-shirts worn by our fellow revelers.

After the wannabe artists in us took out our frustrations on our T-shirts, legendary denim brand Lee let us do it all over again—this time on our jeans as the brand brought its DIY Denim Workshop to Cebu, jump-starting its celebration of 125 years of craftsmanship.

Guests included friends from the media and personalities from various creative fields. Accessories designer Iris Arcenas splattered pink paint on her jeans while her daughter Mia, also a designer, distressed her pair.

Zee Lifestyle’s Shari Quimbo and Michael Sanchez transformed their pair into shorts and Jackson Pollock-ed them with paint, only to get even more paint on them at Sinulog the day after.

Also using paint as their DIY tool of choice were young fashion designers Roni Yu and Bree Esplanada. In an ode to Stephen Sprouse, they turned their Lee denim into a graffiti wall of sorts.

Fashion designer Oj Hofer marched to the beat of his own sartorial drum, as he usually does, covering the entire waistband of his jeans with loads of Lee buttons. Cheekily, he told us, “I rarely wear belts, so I’m building one into my jeans!”

Since festival fashion has always been about excess, his piece fit right into the spirit of Sinulog.