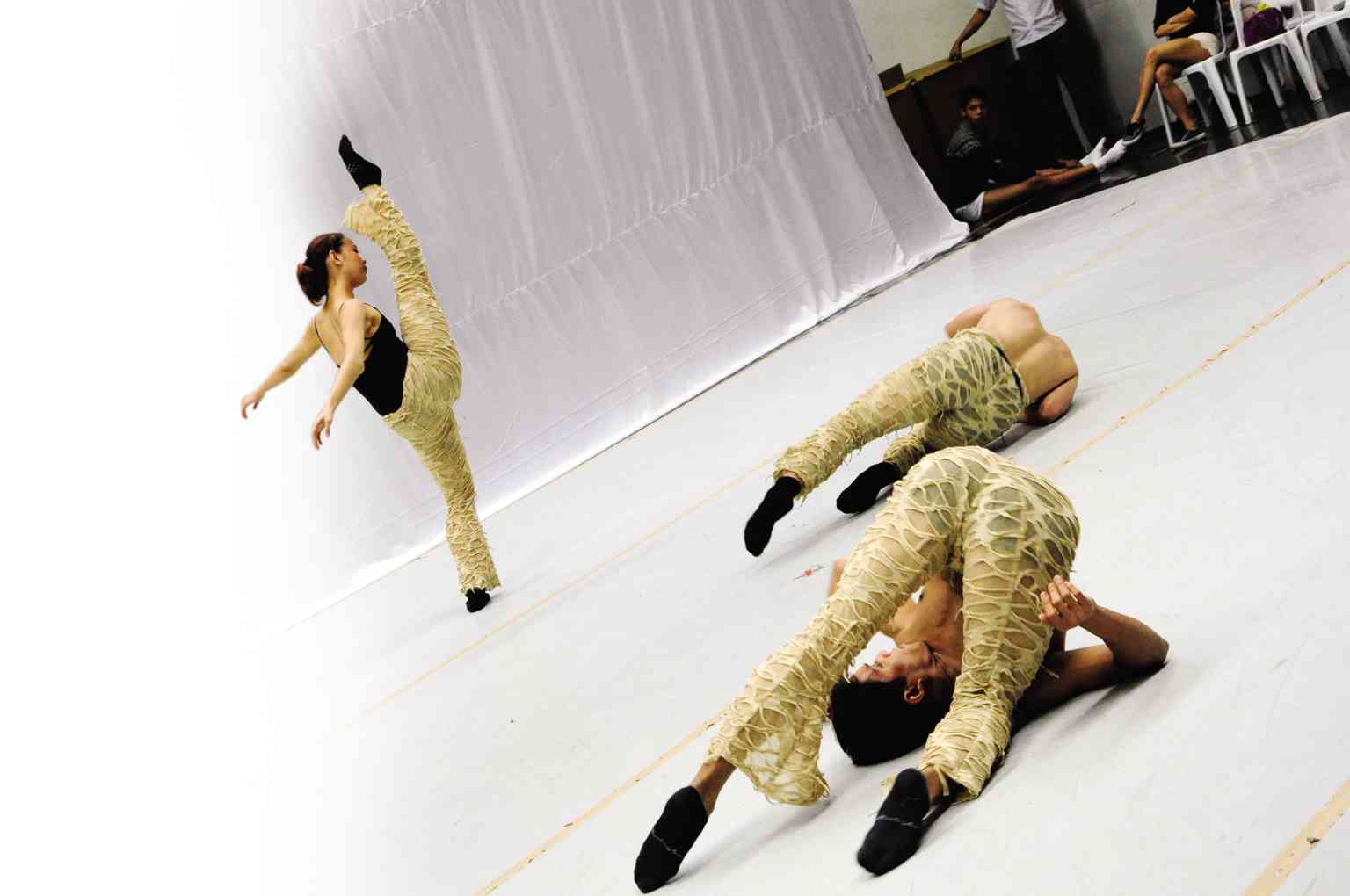 The rather risque position is part of a new work called “Zebra” by Ernest Mandap, a former BP dancer now based in France.

The 30-minute choreography, which explores sexuality and same-sex relationships, is the most provocative work in BP’s season-ender “The Art of Dance.” This is why BP will offer two programs, “Day” or matinee shows with works for the general public, and “Night” for the evening shows with “adult” themes.

At a press conference and open rehearsal, artistic director Paul Morales explained that he wanted to show the diverse creativity of BP choreographers, ranging from seasoned artists such as Denisa Reyes and Agnes Locsin to newbies such as Gilliane Gequinto and Edana Labitoria, who has created a street dance in a formal setting. Then there are the familiar favorites—the good ol’ “Black Swan Pas de Deux” and “Paquita Grand Pas De Deux.”

“Ballet Philippines is known for variety,” said Morales. “I wanted to capture the diversity of emotions and culture. It’s all in our bodies. We grew up exposed to the West but there’s also that Asian sense in us.”

For this show, Morales pays homage to the centennial year of National Artist for Music Lucio San Pedro. He complained that great Filipino artists have largely remain unappreciated by Filipinos themselves so his show is but a “modest tribute” to them. His six-piece neoclassical ballet is set to the music “Recuerdos,” with live piano playing.

“It waxes nostalgic and shows how Filipinos love music and what makes them move,” he said about the work. The ballet portrays the old-fashioned coyness of a Filipino couple, the rapturous movements and ecstatic lifts motivated by the San Pedro composition.

In the past few seasons, most of Morales’ works favored pas de deuxs. “I have this foolish belief that love can conquer all,” he said with a chuckle.

In the same neoclassical genre, former BP principal Brando Miranda composed a pas de deux inspired by the music of Czech composer Antonin Dvorak. He explained that it’s about courtship, coming together and walking away from a relationship.

The choreographer cast the upcoming artists Monica Gana and Earl John Arisola, both lauded for their fluidity. He wanted to capture the innocence of these dancers as opposed to getting seasoned dancers with a sophisticated albeit studied approach.

There are some parts wherein they dance the same gestures, but in opposite directions. Their partnering moves show off Gana’s exquisite arabesques that explode into expansive movements.

In contrast to the purity of duets by Morales and Miranda, Mandap’s “Zebra” is part autobiography and part his personal statement on sexuality. It starts with people crossing the stage, walking, bouncing and jumping, as if depicting life in the big city. Then they break out into couples. Some boys lift the girls and some girls lift the boys as if to show a role reversal.

“When I went to France, I tried to adapt to the French people,” explained Mandap, 40. “I lost identity. I would ask: Who am I? Where did i come from? When I turned 30, I found the balance of being part of French society yet staying Filipino.”

The choreography also portrays sexual tension and ambiguity between couples. One scene shows a guy surrounded by women. With lyrical music to score this section, it connotes that the man is fantasizing about his feminine side but he can’t express it because of social taboos.

A theater portion features three danseurs, acting macho, talking about gay men. The choreography climaxes to same-sex kissing and release of inhibitions. In the end, the ensemble strip down to flesh-colored leotards and briefs, huddle together then roll down sensuously on the floor in a fetal position.

Mandap explained that the ending symbolizes people stripping off their identity and the ideal of unity in a sexually divided society. He choreographed the work as his reaction to society’s conservative attitudes toward gender issues.

Budding choreographer Gequinto, 22, has created a still-untitled work about the resilience of Filipinos. A dance major at the University of the Philippines, she credits mentor Ava Villanueva for inspiring her to do choreography.

When Gequinto joined the National Music Competitions for Young Artists, she performed a solo by Villanueva who taught her movement of breath through the body and how the body surrenders to gravity. Gequinto explores this in her work with music by painter-composer Orvile Tiamson.

A portion of the work features a trio of dancers rolling on the floor, curling up, rising up for lifts. They make gestures to connote climbing up and going down.

“My choreography is earthbound,” said Tiamzon. “I work on pliancy which is another word for resilience of the Filipinos. Through hard times, Filipinos always rise up.”

Reyes was inspired by the motion studies of English photographer Eadweard Muybridge. The choreography shows men in white shorts, flexing muscles and clenching their fists, rotating their torsos and legs. The danseurs perform the same movement one after the other to portray the successive images reflective of Muybridge’s frame-by-frame movement-photos. The choreography is enhanced by the play of lights and shadows, designed by Virgilio Catoy.

“Denisa loves to change her choreography,” said Victoria. “When everything has been set, she still likes to change some parts. The movements may be fast, but the tempo is slow. In the end, everything fits.”