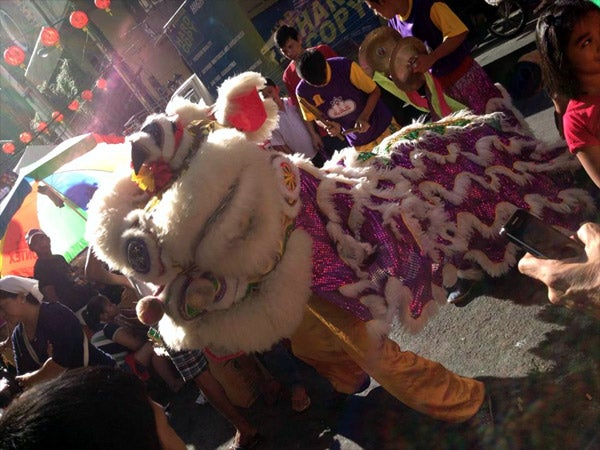 Revellers welcome Year of the Wooden Horse in Manila’s Chinatown

MANILA, Philippines — Hostility turned into a joyous mood when the Chinese-Filipino community on Friday ushered in the Year of the Wooden Horse in Binondo, Manila — the world’s oldest Chinatown outside of mainland China.

Since red is considered a lucky color in Chinese culture, a motley crowd predominantly clad in red filled the heart of Manila.

Stalls selling figurines, accessories, charms, coins and even plants believed to bring in luck and fortune were scattered in the streets of Ongpin, Tetuan, Tomas Mapua, among others.

Ofel, a sales agent, is just one of the many who went all the way to Binondo with her family from the province to join in the festivities.

She made sure that before leaving Chinatown, she would have something to put in her family home in Taytay to attract good fortune.

Reasonably priced at P30, Ofel bought a bundle of “palay” or rice grains tied in a red ribbon symbolizing “health, wealth and prosperity.”

“This is to bring in luck in our daily food supply. We usually hang this in our door,” she said.

Revellers believe that their Chinese New Year ritual is not complete if they will not drop by The Dragon Phoenix, a known Feng Shui store, to shop for figurines and charms.

While wearing an old Chinese hat, ritual vendor Grace Garcia catered to customers by performing a ritual over accessories and charms being sold in her shop.

The sacred ritual consists of a bronze mortar and pestle sanctified in a Chinese temple. Like that of a gong, Garcia will make you say a wish while she pounds on the rim of the bowl containing the bracelet or charm. She will then perform a circling motion it until the mortar makes a hollow sound.

The ritual doesn’t end there as Garcia will advise the customers that once the bracelet had been “cleansed,” only the owner can hold it.

“Once the bracelet is touched by others, your wish will become useless,” she explained.

Residents of Binondo were one in saying that the crowd is getting bigger each year and have expressed hope that it will stay the same for the years to come.