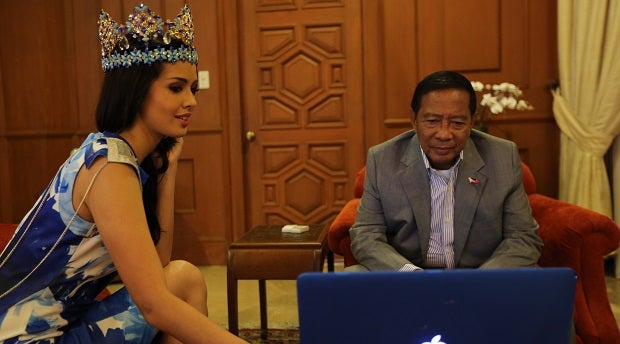 Miss World Megan Young shows to Vice President Jejomar Binay the proposal for the hosting of the international pageant in the country. Young and Miss World Philippines national director Cory Quirino made the proposal to Binay saying that the contest will help in the rebuilding efforts for the areas devastated by Super Typhoon “Yolanda.” OFFICE OF THE VICE PRESIDENT

Vice President Jejomar Binay and Miss World Philippines national director Cory Quirino are now pushing for the holding of the Miss World event in Manila for the first time after the country won in four major International pageants in 2013.

“I hope we get the government’s support because the Philippines has not yet hosted the Miss World. This will be the first Miss World finals in the Philippines and it is timely because we have the first ever Filipina Miss World,” Quirino told reporters after giving a proposal to Binay Thursday.

Miss World Megan Young was crowned during the finals of the pageant held in Bali, Indonesia last September 2013. She is the first Filipina to win the title.

“We hope that it will be in the Philippines. We want our theme to be ‘rebuilding’. It’s not just about hosting the pageant,” Young, who was with Quirino in their courtesy call to Binay, told reporters referring to the rehabilitation efforts in Visayas after Super Typhoon “Yolanda” (international name Haiyan).

Yolanda ravaged across the Visayas region November 2013 causing massive devastation particularly in the provinces of Samar and Leyte. Thousands have been killed while millions are displaced after they lost their homes.

Quirino believes that Megan’s victory two months before Yolanda struck is a sign for her to be able to bring attention to the reconstruction efforts that is expected to take several years.

“It is a dream and a wish list from the beginning for the Philippines to hold the Miss World pageant. And I guess it was a sign from heaven when Megan won. Then right after that, [about] a month later, typhoon Yolanda happened to the Philippines,” she said.

They have been waiting for a chance to show the proposal to President Benigno Aquino III while on Thursday, they showed it to Binay in the morning and in the afternoon to the Department of Tourism.

Quirino said that a fund raising event would be held for the benefit of the victims of the typhoon. The celebration will be a month-long affair to promote Philippine culture and tourism.

“We will be able to promote Philippine tourism around the world. Show the [world] we are going to rebuild the Philippines … to show them that we are survivors,” Young said.