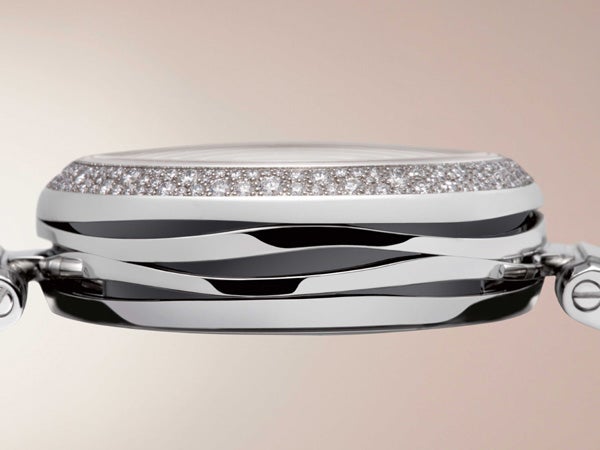 Can you imagine a line of women’s watches that recalls the most compelling design elements of the golden age of couture and combines them with the best mechanical watch movements in the world? Is the idea simply too good to be true?

OMEGA can answer these questions in a word: Ladymatic.

The OMEGA Ladymatic reintroduces a name from the storied brand’s illustrious past. Originally launched in 1955 and continuing for the better part of a generation, the Ladymatic wristwatch line defined feminine grace and elegance in another era. It was one of the brand’s first self-winding watches to be designed especially for women and it featured the smallest automatic movement OMEGA had ever made.

OMEGA has chosen to revive the legendary name with a family of watches whose design originality and Co-Axial innovation combine to give an entirely new meaning to Ladymatic. These are timepieces that have been created to address women’s desire to own wristwatches that make profound fashion statements but which are also equipped with the best series-produced mechanical watch movements in the world.

Academy Award-winning actress Nicole Kidman, an OMEGA brand ambassador since 2004, will be the face (and wrist) associated with the Ladymatic line.

Asked what she thought about OMEGA’s decision to use a name associated with a product launched in the fifties, Kidman said, “There’s something appealing about that type of communication. There’s a fascination with the era which means that the advertisements can be playful without actually turning back the clock. As the Ladymatic watch collection represents state-of-the-industry technology, this campaign is really a sort of wink.”

When the first Ladymatic watches were released by OMEGA in 1955, the name concisely communicated the collection’s strength: the Ladymatic was a self-winding watch created especially for women.

OMEGA president Stephen Urquhart said about reviving the Ladymatic name, “We’re certainly aware that it sounds different now than it did 55 years ago. But the new watches are

superb and they’ve been designed for women who have told us that they are as interested in the quality of our mechanical movements as they are in the style of the watches.”

Mr. Urquhart added, “By reviving this name, we’ve been able to focus attention on how important our women customers have been to us over the years and also to show the world what a mechanical watch for women should be in the 21st century.”

Nicole Kidman echoed his sentiment saying, “These days, interest in the quality of a watch movement isn’t gender specific – women have the same interest in its performance as men do. The Ladymatic addresses that perfectly.”

The watches in the new Ladymatic line feature polished 34 mm cases with a distinctive ceramic ring between an outer decorative wave and the inner case body. The cases are crafted in 18 Ct red or yellow gold or in stainless steel.

The Ladymatic watches are offered with a choice of polished or snow-set diamond-paved bezels. The polished screw-in crown is either set with a BRILLANT OMEGA CUT™ diamond or is embossed with a polished OMEGA logo. The polished caseback has a sapphire crystal that reveals the movement that powers the watch.

The movement driving the Ladymatic watches is the OMEGA Co-Axial calibre 8520/8521. At its heart is the Co-Axial escapement, the component that in 1999 signalled a revolution in how mechanical wristwatches are made. Each movement is equipped with OMEGA’s exclusive Si 14 silicon balance spring, an innovation that makes it more resistant to external shocks and environmental disturbances.

Each watch in the OMEGA Ladymatic collection is an officially certified chronometer, a testimony to their outstanding timekeeping performance. The remarkable stability and performance of the Co-Axial calibers equipped with silicon balance springs makes it possible for OMEGA to deliver each Ladymatic wristwatch with a four-year warranty.

The stunning face of the Ladymatic is highlighted by the supernova pattern, which emanates from the centre of the dial. The extra-white mother-of-pearl or lacquered black dials match the colour of the striking ceramic ring. The dials are available either with 11 diamond indexes in facetted 18 Ct gold mounts or in understated elegant simplicity with no hour markers. There is a diamond-polished date window at the 3 o’clock position. The polished alpha-shaped hands have been made from 18 Ct gold and are treated with white Super-LumiNova, making them readable in any lighting conditions.

The OMEGA Ladymatic watches are presented with either bracelets in metals matching their cases or on alligator leather straps in mother-of-pearl white or brilliant black. The metal

bracelets feature OMEGA’s patented 3-row screw-and-pin design with a butterfly clasp. The alligator straps have a polished link in the metal that corresponds to the case and an 18 Ct gold foldover clasp.

The new OMEGA Ladymatic Collection draws certain influences from its namesake: like the original Ladymatic watches, the line perfectly blends graceful, timeless design and OMEGA’s groundbreaking technology. The new collection, with its Co-Axial technology and bold fashion features, takes the best elements of an earlier era and introduces them, completely updated and upgraded, to women of accomplishment in a new century. (advt)