Pompeii, Sorrento, Capri–revisiting the Italy I loved as a child | Inquirer Lifestyle 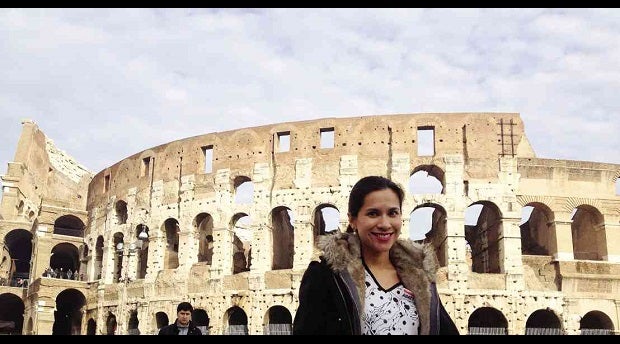 Pompeii, Sorrento, Capri–revisiting the Italy I loved as a child

I was just a young girl the first time my parents brought me to Europe. Up until then, Europe was unknown to me.

We arrived in The Hague, Netherlands, where I experienced cold like never before and saw my breath turn into mist as I spoke. Fortunately, the spring-summer weather arrived around the time we were in Paris. Not even a teenager yet, I was more excited to be at Euro Disneyland than the city of romance.

We had several stops, but none stood out as vividly on my mind as Italy and the island of Capri.

Just getting to the island was an adventure. We were picked up early morning and, after a few hours of driving, brought to Sorrento where we took a ferry to our destination.

The island was lovely, with secret winding paths and the scent of lemon everywhere. But what I can never forget was getting into a rickety little boat and making our way to the “Blue Grotto.”

As we sailed in the ocean, I looked down and, to my surprise, saw the sand at the bottom, shining as brightly as if we were on the shore.

In the grotto, we stooped to enter a small hole which opened up into a sea cave lit so brightly by the dancing azure waters. I was sure we had found the playground of mermaids.

There wasn’t a single artificial lamp in that cave. It was simply the reflection of the sun-light as it bounced off the water, which illuminated the cave from within. I reached out and touched the water and saw my hand “glowing” in the water. From that moment on, Italy found a special place in my heart.

Which was why I was thrilled beyond words when I was invited on a trip to Italy by Pan Pacific Travel Corp. and Trafalgar last January. Between the memorable first trip of my childhood and this one, I had gone back to Italy several times; but I knew there was still so much left to see and do, so I happily packed my bags.

Cathay Pacific sales and marketing manager Ryan Uy met us in the airport. In the group were my neighbor and friend, Christine Dayrit, and my new friends and traveling companions, Lea Bacani, Violeta Chan, Amy Chang, Rachel Santos and Lisa Tan.

During a two-hour layover in Hong Kong, we went to Cathay’s newest lounge, The Bridge. I told Ryan how conveniently located Cathay lounges are—always near the departure and arrival gates. He said that this is because Cathay has six lounges scattered all over the HK International Airport. And with The Peninsula as official caterer, there is always good food.

At The Bridge, I settled in one of Cathay’s signature lounge chairs, the Solus, and had some freshly baked pastries, while some in the group opted to use the shower suites in preparation for the long haul.

We boarded the new aircraft with its bigger seats and Business Class cocoons. The new Premium Economy seats are a total enhancement of Economy service and a welcome addition to Cathay’s service on board. It is definitely worth upgrading to.

Even the regular Economy class seats are more spacious; and the incline angle is more comfortable than the old Economy seats.

The new Business Class cocoons, so inviting, are actually the same size as that of the First Class seats in some airlines.

There are new features so that couples traveling together could now opt for the middle cocoons, which allow them to converse and hold hands. There are extra storage areas and mini lockers for your stuff—coat and shoes, iPad, bag, medicines and glasses.

Best of all, for people like me who easily get cold, there are goose down duvets to snuggle into. As soon as dinner was over, I pressed the “Lay Flat” button and slept soundly through the flight.

Our evening flight was perfect—it meant we could sleep all night and wake up fresh in the morning in Rome.

Upon arrival, we were met by Trafalgar travel director Giacomo Giamboi, who wasted no time in getting to know all of us and what we were interested in. In a group composed mainly of women, that meant only one thing—shopping.

Giacomo edited the itinerary—a trip to Pompeii, to see the city that Mt. Vesuvius had unleashed its fury on 2,000 years ago, and a trip to a shopping outlet to unleash the shopaholics.

As we made our way through the South and on to Sorrento, Capri, Alberobello, Matera and back to Rome, Giacomo was always ready to accommodate our requests for additional sightseeing or free time. As we reviewed the list of romantic movies set in Italy, he made an impromptu decision to add Positano to our list of destinations.

Contrary to my belief that Mt. Vesuvius had destroyed Pompeii, our guide Enrico shared the local sentiment that the eruption had actually preserved the city and allowed it to live on, far beyond than it could have, had it not been frozen in time.

He was right. Walking through the streets, in the shadow of Mt. Vesuvius, we got a glimpse of everyday life in Pompeii 2,000 years ago, through the city layout, structures and frescoes that had survived to tell their tales.

The figures of the people and animals were created from the actual “molds” left behind by those who did not survive. Plaster cast was poured into the excavated holes to create an exact representation of the tragedy of Pompeii.

We had a lovely dinner in a beautiful glass-enclosed restaurant in Sorrento where the waiters kindly gave in to my dessert request for a chocolate profiterole instead of the creamy lemon tart.

Of all the restaurants, La Favorita O’ Parrucchiano was my favorite. Looking around at the walls covered with newspaper clippings from all over the world, I was not alone in appreciating the indoor garden restaurant our travel director had wisely chosen.

The next day, we found ourselves exploring my beloved island of Capri. Though the weather conditions prevented us from visiting the Blue Grotto, I was content to walk around and enjoy the view, especially  the town just above, Anacapri.

We explored the Villa San Michel, its beautiful gardens and interesting history before making our way to Positano where the magnificent views of the Amalfi coast made the drive  truly enjoyable.

After a restful sleep and hearty breakfast, we made our way to our next destination, Alberobello, to see the unique limestone Truli houses from the 15th century.

Truli houses were built by simply piling stones atop one another, so that they could easily be disassembled when tax inspectors came; feudal lords did not want to pay housing taxes for their workers. I can’t imagine how this setup survived for more than 300 years, but it did! Until seven disgruntled workers finally spoke up and brought the matter to the attention of the king.

Today, far from the initial purpose of easy demolition, the Truli houses are preserved and maintained as a Unesco World Heritage site.

But the best part of this day was the “Be My Guest” portion, which took place in the Truli home of a local. There, Zia (Aunt) Margarita taught us how to make a traditional local pastry, providing us our ingredients and time to bake our own batch to bring home. Her niece prepared a delicious home-cooked dinner which we enjoyed in between story-telling about their life and their town.

Our fifth day brought us to Matera, which apart from the cave homes carved into the rock, is known as the setting of Mel Gibson’s “The Passion.”

But our travel director was correct in saying he had saved the best for last.

We woke up bright and early on our sixth day to get to the Vatican before the regular opening hours. Trafalgar has a special arrangement with the Vatican that allows its tour groups to enter without having to join the queue earlier than the opening hours.

Despite the number of times I had been to the Vatican (my mom doesn’t believe a trip to Rome is complete without one), I never had this unique privilege and always had to stand in those long lines, usually in the sweltering heat.

Our local guide refreshed my memory on the details of the Sistine chapel and St. Peter’s Basilica. Contrary to popular belief, Michelangelo did not actually paint lying on his back, but rather standing up with his neck tilted backwards and his eyes directed upward, splattered with paint and plaster. This eventually ruined his vision.

Once I found myself standing under the splendor of Michelangelo’s fresco of scenes from the Book of Genesis and the wall of The Last Judgment, all thoughts disappeared from my mind. It truly is a religious experience, to say the least, to be able to view this man’s genius.

Some say that Michelangelo hated working in Rome as a painter for the Pope, and that he left his self-portrait in an image on the skin of St. Bartholomew, as if to say that, like the saint, he too had been skinned alive and tortured.

But I’d like to believe that this work could not have been done without passion and love for what one was doing, or, at the very least, love for his faith. But who am I to speculate about what really goes through the mind of a genius?

From the Vatican, we made our way to the Colosseum before breaking up to spend the day as we wanted. The night ended on a high note at the Trevi Fountain and Spanish Steps.

The next day, our Filipino group was on its way back to Manila, again enjoying Cathay’s straight-to-sleep flat beds, but not as much as we enjoyed the food at The Wing, another CX lounge at HKIA. After a week of pasta, pizza, hams and cheeses, freshly made peanut soup noodles and steamed pork buns never tasted so good!

Trafalgar offers an early bird discount of 10 percent off on package tours booked by Feb. 12. But catch other great deals from Cathay Pacific and Trafalgar at the much awaited annual Travel Tour Expo on Feb. 14-16, at the SMX Convention Center.