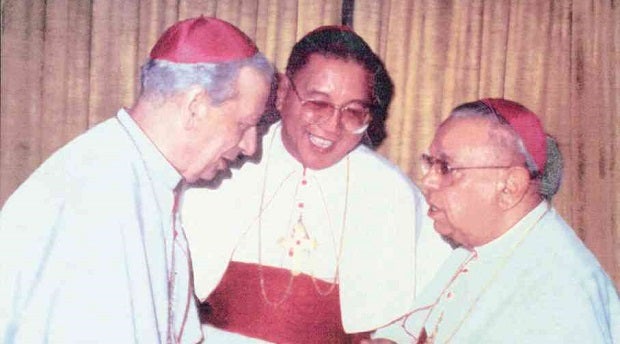 Opus Dei prelate to be beatified

Opus Dei members from all over the world are expected to gather in Madrid, Spain, on Sept. 27 for the beatification of  Bishop Alvaro del Portillo, successor of Msgr. Josemaria Escriva, the founder of Opus Dei who had also been beatified. It was Portillo who became the first bishop of the Opus Dei personal prelature.

The beatification ceremony will be presided over by Cardinal Angelo Amato, the prefect of the Congregation for the Causes of the Saints.

Pope Francis had approve the required miracle for beatification and issued the formal decree of the Congregation for the Causes of the Saints last July 5.

“In this moment of profound joy,” said Bishop Javier Echevarría, now the head of the prelature. “I wish to thank Pope Francis for his decision to proceed with the beatification of this bishop who loved and served the Church so much. From now on, let us entrust to the soon-to-be Blessed Alvaro the intentions of the Holy Father: the apostolic renewal and service to God of all Christians, the care and support of the needy, the upcoming synod on the family, and the holiness of priests.”

Bishop Del Portillo, whom people called “Don Alvaro,” is closely linked to the cities of Rome (where he lived most of his life) and Madrid, where he was born on March 11, 1914, and where he spent his childhood and youth with his parents and seven siblings. It was also in Madrid that he met Father Escrivá and joined Opus Dei in 1935.

While he was a 19-year-old engineering student in Madrid, the young Alvaro del Portillo took part in the activities of the St. Vincent de Paul Society, teaching catechism to children in Vallecas and other poor neighborhoods and distributing donations and food to needy families.

Later, encouraged by St. Josemaria, he continued to carry out similar activities with the young people who participated in the initial work of Opus Dei organized around the DYA Academy.

Vicky Javellana-Echauz, who handles our “Circle” as Opus Dei Cooperators (once a month), suggested to me one time that I pray to Don Alvaro, if I needed money. She explained that Father Alvaro was a civil  engineer and he raised money for the building of Opus Dei centers. And so it was that I prayed to him and, lo and behold, the answer came at once.  Ever since then, I have been praying to him.

Thirty members of his family and friends are joining South Cotabato Archbishop Orlando Quevedo, OMI, in Rome when he receives the red hat along with 18 other prelates during the consistory on Feb. 22 at the Basilica of St. Peter.

From the Philippines, Quevedo is the first Ilocano cardinal; he’s a native of Sarrat, Ilocos Norte.

Lina Araneta Santiago met Fr. Orlando Quevedo 38 years ago when he served as parish priest of Our Lady of Grace Church in Caloocan City.

She remembers him as a good priest and a poet. Ciriaco and Adela Santiago, the parents of Lina’s sister-in-law Digna Santiago, sister of her husband Danilo, donated the land where Our Lady of Grace Church stands. The Araneta-Santiago families are going to the installation of the new cardinal.

He  was diagnosed having  squamous cell carcinoma, a type of cancer. Father Marc was operated last Aug. 27 at the  UST Hospital. It took him a long time to recover. He started  his 33 sessions of radiation therapy in November last year. The radiation treatments, which are very costly, ended last Dec. 20.

Father Marc then had a short Christmas break. When he came back to the hospital last Jan. 6, he underwent proctosigmoidoscopy. The result showed two nodules near the opening of his rectum. His surgeon wants to be sure that it is not a recurrence of the carcinoma.

We appeal to you, kindhearted readers, for any help which you could extend to this good man of God. You may reach him through his mobile phone, 0915-9618123.

The Prayer Warriors of the Holy Souls will hold the Mass of Remembrance on Feb. 10, 11 a.m., at the Navitiy Chapel of  the Immaculate Conception Cathedral on Lantana St., Cubao, Quezon City. There will be a priest available for Confession before and during the Mass.

The saint-friend of the Holy Souls for the month of February is St. Catherine de Ricci, OSD.

Parañaque will be graced by Our Lady of Buen Suceso whom devotees call “Nana Ciso.”  Today, Feb.  9 at 2 p.m., will be the Lambat Festival in honor of St. Andrew on the grounds of City Hall.

On Feb. 13, 6 a.m., the Regatta fluvial procession in honor of “Nana Ciso” will be held in Coastal Road.

This April 27 will be the canonization of the very popular and well-loved Pope John Paul II and Pope John XXIII in Rome.  Adams Travel has 10 beautiful itineraries set for the canonization. They are Marian pilgrimages with Lourdes and Fatima, Eastern Europe, Adriatic Coast with Medjugorje, Italy only or with Holy Land.

These pilgrimages are accompanied by wonderful and very inspiring priests that include Fr. Efren “Momoy” Borromeo, who will leave on April 11.

Big discounts are available for passengers who will visit the Adams Travel booth at the Philippine Travel Expo at SMX Convention Center in Pasay City on Feb. 14-16. For details, call tel. nos. 5223876 or 5211651.