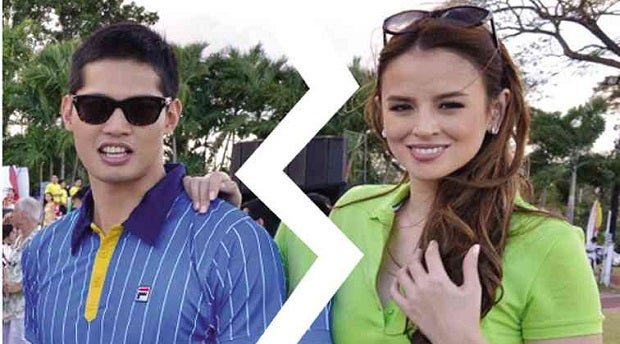 TO BE OR NOT TO BE? Borgy Manotoc and Georgina Wilson

Can Borgy and Georgina work things out?

We start a monthly piece on the romance buzz in town.

What happened?” I asked southern beauty and fashion entrepreneur Audrey Lopez Puckett Chiu why she called it quits and left her husband, British-educated lawyer Aaron Chiu.

The ex-couple have five sons, two of them twins.

She said Aaron got too busy in his job, traveling constantly to do business in the Middle East, among other countries. “I was involved with many charity foundations and other things,” she added.

“I’m moving forward and very happy, excited about many of my plans that I will totally dedicate myself to,” she said. “I’m free, I love my children and also my in-laws.”

Way to go, my palangga!

Audrey’s charity work takes her to Kathmandu in Nepal.

Recently on her way to Nepal, she was in Manila with two of her sons, whom she brought to see for themselves what her total interest in the foundation is all about.

Somebody whispered to me that a handsome businessman is completely smitten with Audrey.

Next on the rumor mill is this dashing gentleman who is eyeing a tall attractive lady, après dating several others during his “low-key” period!

It seems that he and his new lady are having a great time together. Well, that’s fine, as long as his wife does not find out—otherwise his days of wine and roses might turn him into a… “pecking duck!” Oops.

The relationship of a beautiful couple is said to be on the brink of turning ugly.

Though no third party is involved, there is talk that wifey is getting bored after several years of a happy, wholesome marriage.

But hopefully she gets to realize that love is lovelier the second time around. Di bala, palangga?

I’m reminded of another “bored” wife who has been hitting the nightlife like there’s no tomorrow.

I’ve seen her a few times enjoying the club scene with her gang. In other instances, she’s with a close pal of hers.

She told me she missed the nightlife. “Now that my kids understand and it’s okay, too, with my husband, I’m just out to enjoy and have a fun time,” she said.

All I can say, dahling, is don’t play with fire, ’cause it might engulf you and ruin your happy marriage.

A little flashback: Both were denizens of Manille’s high-society set, before Reyna went to Hong Kong for a vacation, then met and married the son of a rich man in that region.

Not long after, Reyna’s witty sister Shirley went to visit her in Hong Kong, where she met and married the cousin of Reyna’s husband.

After several years of being happily married, Shirley and her husband split up.

Shockingly, not long after, her elder sister Reyna also separated from her hubby!

Now the gals are busy attending to their successful business as well as being event coordinators, dahlings.

Incidentally, the patriarch Hari Harilela is the only Indian zillionaire who was ever knighted by the Queen of England.

Closer to home, it saddens moi to hear from reliable sources that another beautiful twosome, Georgina Wilson and Borgy Manotoc, have gone their separate ways.

Again, the question, why?

I heard that Georgina has her own reasons for leaving Borgy, who is said to have been irked by those reasons.

In a change of heart, Georgina then wanted to start all over again with Borgy, who refused.

Now it is being whispered that they are “working things out,” for the moment.

This is another one of those let’s-wait-and-see games, palangga.

Not too long ago, Wendy Puyat had a scandalous affair in Hong Kong and then separated from her husband Tony Hotung.

Now Wendy is back on the social scene, after being swept off her Jimmy Choo-clad feet by French millionaire Guy d’Auriol.

Love of the Century

Back in each other’s arms after a short breather is my pal, Ricardo Po of Century Tuna fame, and his pretty love, lawyer Krystle Bacani, who lives with her parents for now in their sprawling Forbes Park residence.

Eligible bachelor and art collector Marcel Crespo is now seen with his lady love, head-turner Helena Belmonte, after having kept their relationship under wraps for several months.

Everyone is happy for them, palangga.

Enrique and Monique have actually been dating steadily for a year. What’s more, they have set Oct. 6 as their wedding day in London, a place close to their hearts.

Everyone is happy to see Enrique finally settling down with his princess, Monique.

Tall and handsome Raoul Olbes has also found his lady love, sultry beauty Ellen Adarna, après playing the field with other partying gals around him.

There is hot talk in the party scene that Shu Uemura brand manager Jessica Wilson and good-looking investment banker Moritz Gastl are an item.

Three women, old-rich, famous and married, had cosmo Manille talking about their scandalous behavior and love affairs. They would exchange and compare notes, not giving a damn as to whoever was within earshot.

This vivacious belle from Bacolod used to be the talk of the town even when she was in her teens, when basketball players vied for her attention. After studies abroad, she married a southern gent, but the union didn’t last.

“I got bored,” she said, but kept tongues wagging about her affairs. She’s mellowed now, but naughty still, as she quipped, “I had it all! Been there, done that!”

The beautiful and popular Denisse Oca, who is usually seen at parties, clubs and events around town, is about to become a mama. But don’t ask me who the papa is, because my lips are completely sealed, palangga.

Atticus King and Bubbles Paraiso didn’t give a damn about their public displays of affection, especially on social media. So it was very surprising when they broke up soon after he got back from a European trip to visit his dad.

Love comes from the most unexpected places. Soon after a sad breakup with a foreigner, vivacious and smart Michelle Pamintuan has a new boyfriend, the handsome Fabio Ide.

The couple recently went on a skiing trip in Korea. Will there be wedding bells après Michelle’s sister, Tina, gets married in March?

That’s right, Tina Pamintuan is tying the knot and will be Mrs. Brady Wheeler next month.

Brady and Tina will have a small, intimate church ceremony at Union Church in Makati City and a cocktail reception for 100 family members and friends.

The couple ordered their favorite selection of wines, cheeses and charcuterie from Italy, France and Spain at L’Incontro Ristorante Italiano, their special place in Manille.

After several “love-and- lost” affairs, eye-catcher couturier Charina Sarte is now happily involved with the très charmant Valentin Kretz, a French investment banker based in Hong Kong who flies to Manille twice a week. Charina seems so in love with Valentin, and why not? L’amour toujour l’amour n’est-ce pas?