Getting ‘Wicked’ for a cause | Inquirer Lifestyle ❮ ❯ 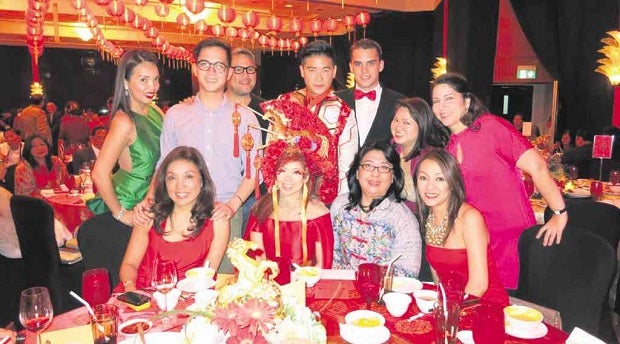 Getting ‘Wicked’ for a cause

The stars must be aligning in my auspicious direction! It seems I have been continuously blessed with happiness from the start of the Year of the Wooden Horse.

The outdoor festivities included the traditional dragon and lion eye-dotting ceremony, as well as a breathtaking display of fireworks courtesy of Enchanted Kingdom.

Makati Mayor Junjun Binay and other VIP guests were part of the eye-dotting ceremony. Constant host partner Tim Yap and I did the countdown afterward to commence the fireworks display. This propitious celebration was held in collaboration with UnionPay International, Hennessy, Enchanted Kingdom, Dragonair and Mandarin Oriental Macau.

The stylishly adorned Mandarin Ballroom was ready at midnight, with a sumptuous eight-course lauriat dinner by Tin Hau’s master chefs. During the dinner, guests were regaled with elegant entertainment, including an enchanting performance by chanteuse Eva Poon.

The grand prize in the evening’s exciting raffle draw was a three-day, two-night stay at Mandarin Oriental Macau, inclusive of round-trip tickets from Dragonair, a fabulous prize won by interior designer Nix Alanon.

The next day, I caught the benefit show of “Wicked The Musical” at the Cultural Center of the Philippines (CCP). Local and international producers of “Wicked” held an additional matinee performance accompanied by a live auction, with proceeds going to those affected by Supertyphoon “Yolanda.”

The support began even before the benefit show happened—CCP waived the venue rental for the additional show to further increase the proceeds for the fundraiser; and cast members and crew pledged their salaries for the performance. Thus, 100 percent of ticket sales could be earmarked to a special project for a school in Tacloban.

After curtain call, Jay Laga’aia, who plays the Wizard, stepped out and, to the delight of the audience, spoke some encouraging lines in Filipino. Thanking all the donors was Juliette Romualdez, mother of Leyte Rep. Martin Romualdez.

Bids quickly escalated as the cast joined in on the fun and helped with the auction onstage. Fans and audience members openly gave what they could to support the cause and earned a wonderful prize in the process. The auction proper ended with the winners coming up onstage for a photo with the cast.

The “Wicked” premium items include the “Get Wicked in the West End” package, which includes two round-trip Business Class travel certificates to London from Philippine Airlines; accommodation at The Athenaeum Hotel, one of London’s top five-star hotels; and two tickets to watch “Wicked” at the Apollo Victoria Theatre in the West End.

Yet another “thrillifying” item is “One Short Day in the Emerald City, The Walk-On Role of a Lifetime.” This item takes the winner through the motions of rehearsals and a costume fitting before finally going up onstage to join the cast in not one, but three scenes in one of the shows. A music sheet signed by Stephen Schwartz, composer and lyricist of “Wicked,” and Glinda’s Training Wand are also up for grabs.

Due to overwhelming demand, the season of the Broadway musical phenomenon “Wicked” has been extended to March 9. Producer James Cundall of Lunchbox Theatrical Productions said they are thrilled to add 16 more shows.

The Philippine season of “Wicked” is produced by Marc Platt, David Stone, Universal Pictures, The Araca Group, Jon B. Platt and John Frost. It is presented by Lunchbox Theatrical Productions, David Atkins Enterprises, 105.9 Radio High and Concertus Manila. Its presenting sponsors are Smart Infinity and Visa.

From CNY to “Wicked,” Tim and I always celebrate parties dressed to the hilt. This year, Tim’s birthday theme was called Yapwards and he had everyone dress in loud prints.

Mye and Norman Cruz of Adworks designed a smashing invitation with a single logo of TY. Party planner Barbie Pardo-Tiangco arranged all the party details at The Gramercy Tower.

A breathtaking sunset cocktail reception at the garden lobby of The Gramercy was prepared to start the festivities. London-based mixologist Rod Eslamieh had special signature cocktail drinks at the bar.

The main party was at 71 Gramercy, the newest dining and nightlife hotspot that has the highest views of the Makati skyline. Models wearing Leeroy New wearable art installations escorted guests to the highest floor of the building. Golden balloon decor by Trish Panlilio of Papillo and beautiful topiaries by Mia Lozada of Bloomwoods filled the party place.

After blowing the candle on his seven-foot-tall cake by Penk Ching of Pastry Bin, Tim had his guests make a wish as the fireworks display illuminated the midnight sky. The 10-minute fireworks show was a gift of Fila’s Cris Albert.