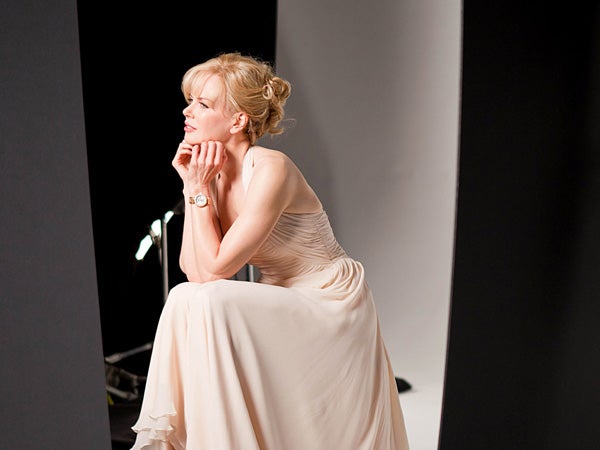 Nashville, Tennessee is known worldwide for its music industry and recording studios are dotted around the city, particularly in an area called Music Row. On a hot day in June on a quiet street a few minutes away from the sounds of pedal steel guitars and fiddles, an Oscar-winning actress was being photographed by one of the world’s most acclaimed fashion photographers.

Nicole Kidman, who lives for part of each year in Nashville, was being photographed for an advertising campaign for OMEGA’s new Ladymatic watch line by Peter Lindbergh.

Peter Lindbergh, the poet of glamour

Lindbergh, who has been described as a “poet of glamour”, is one of the most respected photographers in the world; over the past thirty years his work has been published by every

major international fashion magazine and is regularly commissioned for the most influential campaigns of all the leading fashion designers.

Commenting on the photographs for the Ladymatic campaign, Lindbergh said, “This was an enjoyable project. Nicole and I have worked together before and we are comfortable with each other. Because of what was required for OMEGA’s campaign, we could be quite playful and the results seem to support the product perfectly. An advertising image should work on two levels – it has to be artistically expressive but it also has a job to do; I think these photographs with Nicole succeed on both levels.”

Nicole Kidman: “I like the spontaneity and feeling free”

Nicole Kidman had been photographed by Lindbergh before and was excited about having the chance to do so again. “I just adore Peter,” she said. “He’s very smart and really can work

with movement which is important for me. I don’t like photographs that take too long to shoot. I like the spontaneity and feeling free. Those are the elements that are communicated in these pictures.”

In a relaxed atmosphere the two professionals worked on a clean, simple set and they were both pleased with the results. Asked if there was an element of acting that she brings to a still-photography set, Nicole Kidman laughed and said, “I still feel like I’m playing dress up!”

The OMEGA Ladymatic watches Kidman is wearing in the campaign feature the revival of a name the Swiss watch brand introduced in the mid-fifties. Asked if the name and the ads would appeal to contemporary women, Kidman said, “There’s something appealing about this type of communication. There’s a fascination with the era which means that the advertisements can be playful without actually turning back the clock. As the Ladymatic line represents state-of-the-industry technology, this campaign is really a sort of wink.” (advt)