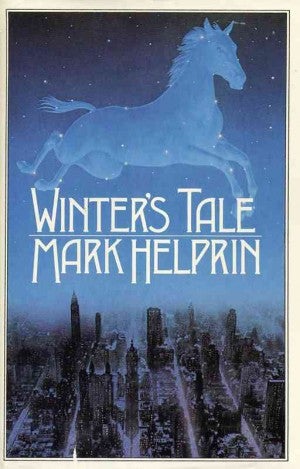 Oscar-winning screenwriter Akiva Goldsman (“A Beautiful Mind,” “The Da Vinci Code,” “I Am Legend”) makes his directorial debut with Warner Bros. Pictures’ romantic drama, “Winter’s Tale,” based on the novel by Mark Helprin.

Set in a mythic New York City and spanning more than a century, “Winter’s Tale” is a story of miracles, crossed destinies, and the age-old battle between good and evil.

Peter Lake (Colin Farrell) is a master thief, who never expected to have his own heart stolen by the beautiful Beverly Penn (Jessica Brown Findlay).  But their love is star-crossed: She burns with a deadly form of consumption, and Peter has been marked for a much more violent death by his one-time mentor, the demonic Pearly Soames (Russell Crowe).  Peter desperately tries to save his one true love, across time, against the forces of darkness, even as Pearly does everything in his power to take him down—winner take all and loser be damned. What Peter needs is a miracle, but only time will tell if he can find one.

“I read ‘Winter’s Tale’ when I was in high school, and I grew up in New York,” said Goldsman. ” People have called it Mark Helprin’s love letter to New York.  It’s a very, very beautiful novel for New Yorkers.  But, more importantly, for me, it’s magical realism—which is a genre that is not that common in American fiction, certainly not in American film either—which is the combination of a real world with magic seeping through the mortar between the bricks that really excites me.  It really beguiled me.  And then, finally, and probably mostly, it truly transcended a love story.  It turns on the notion of love making the impossible possible.  And if you’re a romantic and a sentimentalist, of which I am both, it’s hard not to be beguiled and magnetized by it.”

The fact that the book has magic realism touches lends it well to film adaptation.

“It was the creation of a world that was not historically precise.  Our New York actually floats around about a 15-year period, the big historical component.  But it was to generate a feeling, to evoke a time in the city, and then, of course, to be rooted in the present, in Manhattan today.

“I’m a New Yorker and New York is character.  New York is one of those cities that is like another lead actor.  With the right lights and some good luck, it puts in a performance that you take home with you.  And I wanted that desperately.  Mark had it in the novel.  I have it.  All New Yorkers or people who love the city have it in their hearts.  Everybody has their own New York, and it’s profound and wondrous.  So I was desperate to do that, and it was challenging.  We were not a big-budget movie.  Everybody was, as I said, doing it for a favor or a song or a lark.  And it was a tremendously adverse winter in New York.”

Adapting the book to movie was challenging.

“The book is a far more complex and profound object than certainly any two-hour movie could be,” Goldsman explained.  “It’s closer to 1,000 pages than to the 120 pages that are typical for a screenplay.  So I had to do that thing, which is part of the nature of adaptation, which is figuring out what to keep and what to sacrifice.  There are huge sections of the novel—I mean huge—that are not part of the movie.  There’s one character named Hardesty Marratta, who has hundreds of pages dedicated to him, who does not appear in the movie at all.  So, it was about finding that which was most resonant for me and then extracting a story, both from what was there and from my imagination to make a filmic version of it.”

“Winter’s Tale” will open across the Philippines on Feb. 13.