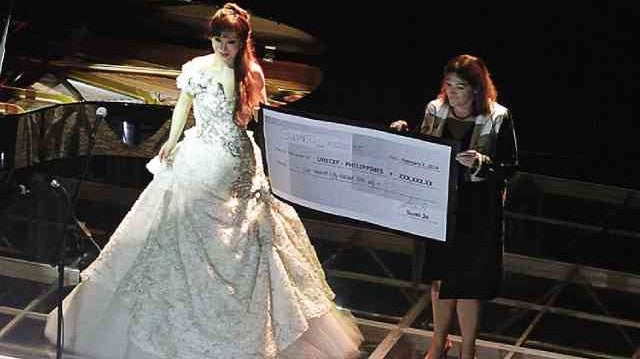 Korean soprano Sumi Jo held music lovers in the palm of her hand during her Manila debut at the Samsung Hall in SM Aura in Taguig City.

Voice teachers, classical singers, choral directors, pianists, theater directors, students and voice enthusiasts had earlier filled up the hall, eager to listen to the Korean diva, the pride of Asia.

The concert was presented by the Korean Cultural Center, Edsa Shangri-La and Steinway Boutique Manila for the benefit of victims of Typhoon “Yolanda.”

The diva performed a bouquet of operatic arias from the Baroque, Classical, Romantic and Contemporary eras; as well as classical, Korean folk and Broadway songs.

She immediately revealed her vocal might with her opening song, Henry Bishop’s “Lo, Here the Gentle Lark,” for which she got a thunderous applause from the audience.

The voice is of world-class quality, unmistakably honed in the bel canto style of singing.  “Beautiful singing,” the literal translation of the style, emphasizes the voice as the most expressive element in singing, especially in opera.

Through a rigorous honing of a dynamic technique, singers of the bel canto style effortlessly intone elegant, velvety melodic lines that are well-kept in the same passage. To bring out the innate beauty of the human voice is the chief concern of such a style so necessary to express the dramatic import of the musical piece.

In the opening aria, Jo made glorious luminous legato lines that were well-nuanced as they went up and down the register. Najib Ismail, her collaborative pianist, and flutist John Sarreal, who essayed the obbligato, were in absolute rapport with Jo. Her execution of the cadenza stunned the audience. It was with astounding rhythmic grace that she did the running passages, the roulade and the ornamentation. The execution was done not to impress, or show off technical prowess, but to express utmost musicality.

In the cadenza of Eva Dell’Acqua’s  “Villanelle,” she revealed a highlight of the vanishing bel canto style, the messa di voce (not to be confused with mezza voce, or half voice), enriched by an alluring, limpid trill.

The messa di voce is a vocal effect that starts with the intoning of a soft tone (piano) that   gradually grows bigger (crescendo) until a dramatic vocal range is reached. The reverse is done as the voice gradually diminishes (diminuendo) to define a momentous denouement, all done in one long breath.

Through it, the emotive content of the “Villanelle” was projected, bringing out an expressive depth to the art of singing. Sumi Jo’s magnificent rendition of this rarely heard song practically made the evening.

But there were more songs to listen to, and the first part was just about to be concluded.  Strauss’ “Danube Waltz,” which is hardly performed now on the local stage, was elegantly rendered, which brought back the memories of the fine Filipino coloratura, Mercedes Matias-Santiago, who had sung the song in her heydays.  Matias-Santiago was one of the exponents of bel canto, which she put to powerful use when she played Lucia in Donizetti’s opera, “Lucia di Lammermoor.” (Of course, it was the triumvirate of Bellini, Rossini and Donizetti to whom the style of bel canto singing is attributed.)

On stage she projected the stance of a seasoned performer. The lights were not dimmed so one could see her expressive face as she intoned her songs. One felt her warm personality. She never projected a snobbish appeal, only a sincere effort to reach out.

Every song she rendered was stamped with a musicality that came from the depths of the soul. She hushed the house with her singing of the lovely Korean folk song, “Ari Arirang,” a tour de force that touched everyone in the audience, especially the Korean listeners.

Once more, Jo surprised the audience with Gershwin’s aria “Summertime,” as she rendered the last line with a broad sweep, wrapped in just one breath. She held the last note for a while and softly went up an octave, showing gradual nuances of dynamics from soft to loud, holding the high note and then sliding smoothly down.

Bel canto singers are adept in bringing up and down the notes as it is one of the style’s peculiarities. (For the untrained ear, it is referred to as scooping, but the Italians call it portamento, from the word portare, which means “to bring a tone either up or down.”)

With Verdi’s opera, “La Traviata,” Jo intelligently started with  “Ah fros’e lui” and proceeded to “Sempre Libera” to highlight the coloratura instrument.  She was stunning in the runs and hit the high note in the end with elan!  Needless to say, this brought the house down.

Still in top form, Jo obliged for encore with the aria, “O Mio Babbino Caro,” and a Korean love song. She sat on the piano and invited the Korean listeners to sing with her the latter, to the great delight of everyone. Then she sang Schubert’s sublime “Ave Maria,” which she dedicated to those who perished in the typhoon.

She deserves to be heard again in Manila!