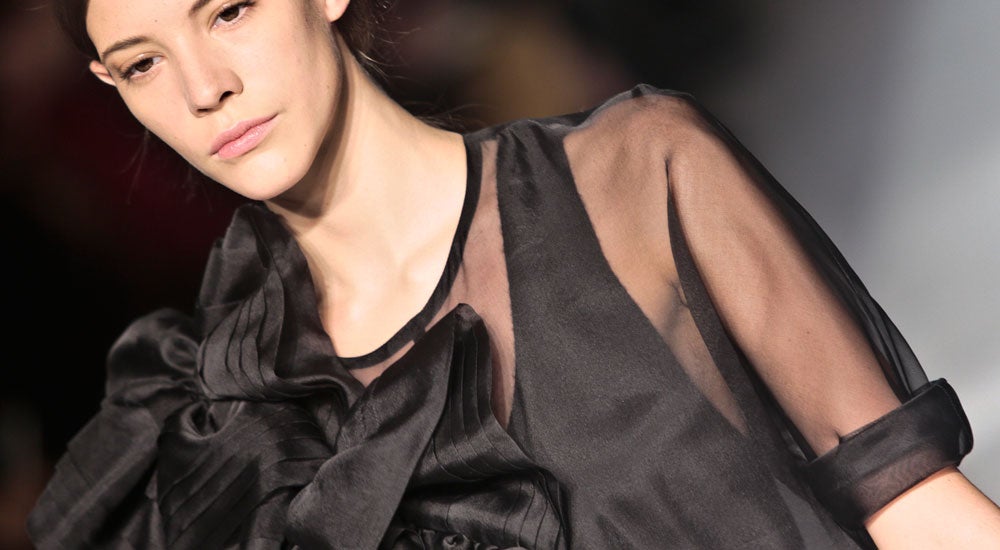 NEW YORK – The sky’s the limit for Victoria Beckham, the Spice Girl turned acclaimed designer who has big dreams Stateside after unveiling her latest catwalk collection in New York on Sunday.

Pictures of Harper in Beckham’s arms next to Vogue queen Anna Wintour, unusually smiling, went viral after Victoria’s 2014 spring/summer show but this time the whole family turned out.

“I just wanted them to see what I do. The boys have never been to a show before. For them to see that mummy works and daddy works is a very positive message,” Victoria said backstage.

Wintour, editor-in-chief of American Vogue and the arbiter of global style, was again front row for Beckham’s fall/winter 2014 collection held in a Cafe Rouge in the heart of Manhattan.

The accomplished collection was one of the most crowded on Sunday, day four of the week-long event that kicks off the global 2014 fall/winter season before the shows move to Europe.

Gold chains picked out details here and there, while black and white were the dominant colors.

“There is a lot more design details this season and also we are focusing on evening,” said the 39-year-old designer.

“There is an element of surprise in every single piece.”

Beckham, who unveiled her first collection in 2008, has won plaudits for her attention to detail and beautifully crafted, feminine outfits that can be worn during the day and evening.

She explained that her fall/winter 2014 collection had a greater attention to evening wear and to design details.

“Each season, the more people understand me and understand my brand, the more I can push it a little bit and I enjoy doing that,” she said.

“I love the long beautiful feminine skirts, with a more masculine trouser underneath it. I love long lean silhouettes and the fact that they are beautifully structured,” she added.

Respected for her small, beautifully crafted collections Beckham is eyeing the big league and the American market, which could mean a return to the United States.

An asute businesswoman she already sells her collections in dozens of countries and in the fall will open her first boutique, a sprawling affair in London’s Dover Street.

“I am very excited about it,” she said. “But I really want to focus on the US,” Beckham told AFP.

“My collection does very, very well, but the potential here is huge for me to take it to the next level,” she added.

“I have to spend more time here, and I have to have people here on the ground working with my retail partners I am really pushing it,” she said.

The Beckhams moved back to London from Los Angeles in 2012 but have not ruled out a possible return to the US.

Yet despite last week’s confirmation that David is preparing to launch a football club in Miami, the family are not going to live in Florida, she insists.

“We are based in London, that’s where our home is, that’s where the children go to school. So we are definitely not moving to Miami, but it’s great to be able to travel and you can get so inspired, you know.”

On Sunday she announced that her ready-to-wear collection would for the first time be available online.

“I’ve got lots of ideas, lots of things that I want to do. It still feels modern, it still feels cool, it has still got edge, but it feels elegant at the same time.”